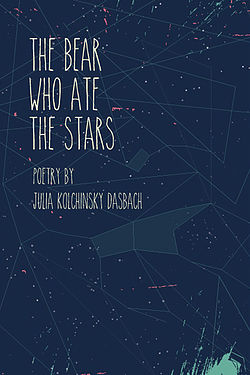 About The Bear Who Ate the Stars

"There's a wonderful range to Julia Kolchinsky Dasbach's poems, rendered all the more remarkable by their consistent depth and polish. These poems feel meticulously crafted, despite a certain primal, sometimes sensual quality often falsely seen as antithetical to intellectual poetry. These poems smell of stars and campfires, a deeper sense of story, a mythological thread running, river-like, all the way back to the dawn of time." -Poet Michael Meyerhofer (Blue Collar Eulogies, Damnatio Memoriae)

Julia Kolchinsky Dasbach emigrated from Dnepropetrovsk, Ukraine as a Jewish refugee when she was six years old. She holds an MFA in Poetry from the University of Oregon and is a Ph.D. candidate in Comparative Literature at the University of Pennsylvania where her research focuses on contemporary American poetry related to the Holocaust. Her poems have appeared in Gulf Coast, TriQuarterly, The Missouri Review Online, and Narrative Magazine, among others. She has received fellowships from the Bread Loaf and TENT Conferences as well as the Auschwitz Jewish Center. Julia is the author of The Bear Who Ate the Stars, winner of Split Lip Magazine's 2014 Uppercut Chapbook Award. She is also Editor-in-Chief of Construction Magazine.