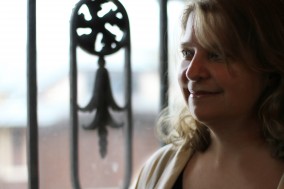 Submissions to this year’s contest are due midnight, New Years Eve. Submit here! Q: Tell us a little bit about yourself.

Jill Birdsall: I live in a house built from salvaged materials where unlike the narrator in my story I feel comfortable behind hundred-year-old doors. My favorite piece of architectural salvage is an iron fireplace which I’m told originally belonged to Jorge Luis Borges.

Q: Where did you grow up? Did it influence any of your writing?

JB: I grew up in northern New Jersey, twenty-five miles outside New York City, where a trip to “the city” meant each year on my birthday my mother driving the Thruway with me to see the Christmas Show at Rockefeller Center. I had little interest in rockettes but a day alone with my mother, that was memorable. I grew up the middle of five children in a town with a roller rink, bowling alley and a candy store called Abe’s. There was a fruit and vegetable stand across from our driveway with a money slot where people pulled off the road to deposit coins in exchange for a bushel of corn or tomatoes. Those were the nights we hit a badminton birdie into the sky and watched the bats swoop down after it. Each summer the same abandoned house erupted in flames until all that was left was its brick chimney. Every time the fire siren would wail, we’d hop on our bicycles and race up the hill to watch that house burn. Now I live a a few blocks from the Atlantic Ocean on the Shrewsbury River, a place where I can breathe deeply and write daily.  I find settings for my stories in both of these places.

Q: How did you approach your winning piece when you were writing it?

JB: The idea of “Salvage” inspired me because I love the history of things and how they are passed down to us replete with their past lives. Of course as soon as I started writing this story I learned it was really about something else. My approach differed in that I considered structure earlier in the process this time. I began with a list of about five or six salvaged items Joseph brought home then decided to limit this to three, which meant three sections to the story as I saw it, each one upping the ante slightly higher than the one before. If this meant I had to give up the fabulous old lifeguard stand I had imagined standing tall in their living room, Joseph watching TV from its seat just below the ceiling, well, so be it.

Q: Why did you submit last year? What inspired you to get your fiction out there?

JB: Right away I was attracted to Eckleburg’s content and design.  I appreciated the variety of voices and the way the stories were delivered, their movement on the screen. Just as I appreciated Rae Bryant’s vision, I was interested in the contest’s judge, Rick Moody. My respect for his work was a main reason for submitting. And who could resist the name of the contest–the Gertrude Stein Award?

Q: What made you want to start writing? How did you ‘know’ you were a writer?

JB: I started “making books” at a very young age. In first grade I made them for my teacher–I remember one about a skunk who was different from his siblings. My brother still has a book I gave him in grammar school. But more than the making of books, it was the way I saw things that told me how much I needed to write. My first published story, “Pears,” in the Iowa Review, is about a young girl seeing through an artist’s eyes. When her senile grandmother is asked if she knows who her granddaughter is, she says yes, of course she remembers her. She is the one who gave me the pears, she says. The granddaughter doesn’t remember giving her grandmother pears but decides she must have done this. She is willing to enter her grandmother’s reality to connect with her. I wrote a first draft of this story when I was about ten. It wasn’t until my twenties when I was in graduate school that I wrote the next draft.

Q: What other writers influenced you and how did they do so?

JB: So many artists have influenced me:  writers and musicians, photographers, painters. My son and daughter act and we often talk about their projects, so I am influenced by stage and film, too. My tastes vary. At different times I have enjoyed reading Virginia Woolf for her extraordinary gift of transferring her mind’s narrative to the page, Raymond Carver’s stories for their precision, Chekhov, John Irving. Like everyone who writes, I learn from everything I read.

Q: What have you been writing this past year? What are you working on now? Do you have any literary works in the oven of your mind or in the files of your computer?

JB: So many. This past year I completed a collection of short stories called “Sea Monkeys,” eighteen of them placed in literary journals including “Salvage” in Eckleburg. I wake at four each morning and climb the stairs to my attic where I write until eight. I love writing in the dark before anyone wakes!  Always I’m writing stories. Currently I’m working on a novel about things lost then found in the storm-battered town of Sea Bright. Other novel ideas:  While my son and daughter were young I began researching my family’s history, in particular a mysterious name change that occurred in the nineteenth century. And I hate to think a decade working in an OB/Gyn office wouldn’t wind up as research for a novel or some other creative project down the line.

Q: How has your experience with The Doctor TJ Eckleburg Review and the contest influenced your writing and/or publishing?

JB: When I left Columbia University with my MFA, I imagined a life of writing and nothing else. Soon after I found myself devoted to my son and daughter. Time spent with them has been the best of my life so far. But during this time I also surprised myself, agreeing to help my husband with his medical practice. Over a decade, I set up three offices for him, recruited physicians, hired staff and managed daily operations, all things as foreign to me as algebraic equations. This was a lot of work and it tired me out. These years I wasn’t writing. When my head finally cleared enough to see what I was doing, or not doing, I worried about starting again so late in life.  It was difficult to quiet down and hear my own voice again. I was writing in seclusion now. And I had new things to say. Reading Rae Bryant’s letter in which she told me Rick Moody had selected “Salvage” for the Gertrude Stein Award was the moment I knew I had learned my lesson. Not only because I’d won the contest but because I’d written this story and it had readers. (Thank you, everyone at Eckleburg!) I was writing again and this time I wouldn’t stop.

Q: Do you have a favorite craft book or website you would recommend to writers?

JB: I have enjoyed Ancestry.com with its access to historical documents. It’s crazy how many of our stories are hidden there.

Q: Any advice for writers submitting this year?

JB: Be daring in your writing and careful in your editing. It seems to me Eckleburg’s editorial is this way, their website filled with daring choices carefully delivered.  It’s true that our stories find homes where we ourselves walk. So if you enjoy the surprises of Eckleburg then why not submit to the Gertrude Stein Award? Now go write! And, good luck!

Submissions to The Gertrude Stein Award in Fiction are due midnight, New Years Eve. Submit here!

“Like this,” he said, “Stay like this.”
I was against the wall already when he pressed closer. A metal hanger bit into my back. It wasn’t the camera but his eyes that zoomed in. They landed on my neck. He touched there, then my shoulder. But it wasn’t me. His eyes traveled my skin, my wrist, my belly. He was touching all over. I wasn’t there. Places to go, things to do. I was out and about. It didn’t feel good. It didn’t feel right. It just felt like he was taking what he wanted, thinking this was me. I didn’t know him. He didn’t know me. But I recognized this man who did this. In the dark I remembered him and I didn’t like him. So I waited it out. When he was done and the air cleared in front of me, I opened my eyes but all that was there was one very old camera.

Read the entire story, as well as last year’s second and third place recipients of the Gertrude Stein Award in Fiction, fiction by Rick Moody, nonfiction by Cris Mazza, an interview with Steve Almond and fabulous other poems, stories and artwork in issue 18 of  The Doctor TJ Eckleburg Review  available here. 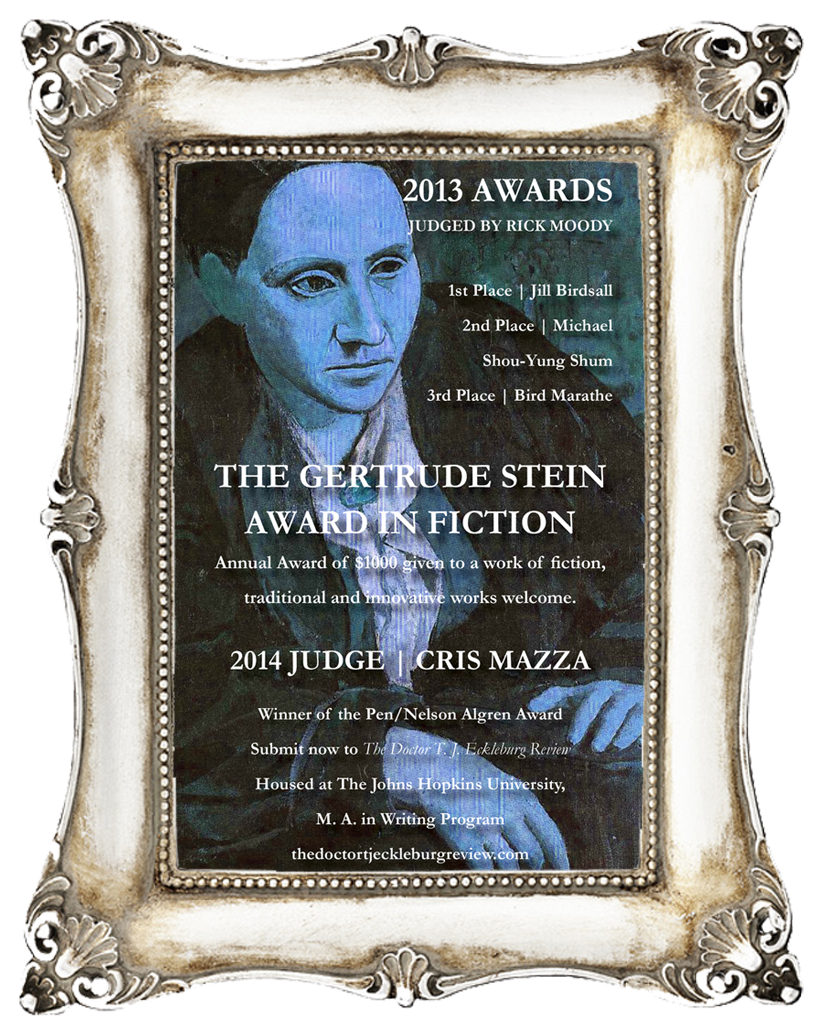