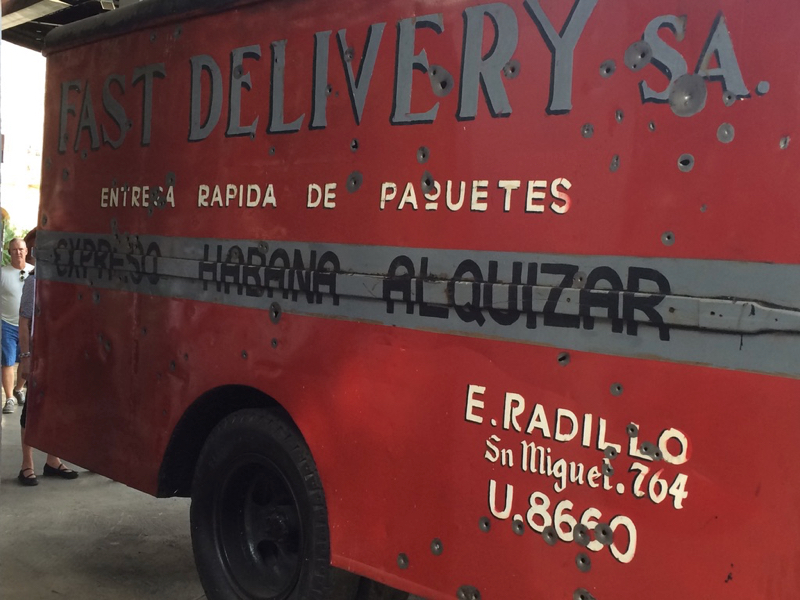 At exactly 3 p.m. on March 13, 1957, Carolos Gutierrez Menoyo directed the commando group into two cars and a red panel truck with the words “Fast Delivery” painted on its sides. The Palace attack was about to begin.

Long before I visited Havana, Cuba in November 2014 and laid my body against the body of the red Fast Delivery truck pocked with bullet holes, displayed in the National Museum of the Revolution, a red truck had been the means of transport into the untracked wildernesses of my mind; it drove itself into multiple poems and fragments, excerpts of which are interspersed with the following text.

Nabokov said that “in high art and pure science, detail is everything,” and by “detail” he didn’t mean long, lingering descriptions, but the visual, analogical, evocative, or verbal flash that triggers an idea or a momentary insight in the reader’s mind.

The visual, analogical, evocative or verbal flash is a hive braiding, unbraiding, swarming and reconfiguring; it blinds, sharpens sight, hisses, fizzles out, emits showers of sparks, settles to ash:

: Is the reach of a child’s arm, withdrawn in the nick of time from the
reckless meander of a runaway red truck. The sound track has been stripped
away; as a ventriloquist who throws his voice into a dummy animates it,
so the child’s fright animates my own.

: Is the stab of light on the broken bottle I sidestepped on the sidewalk this
morning, unrolling and rolling up behind me.

Just outside the kitchen window a clothesline stood, a rectangular square of parallel ropes that rotated on an axis and made a slight mechanical squeak when turned, when wooden pins were pushed over the waist of little girl shorts, little girl underwear, t-shirts with unbudgeable stains.

Waftings of ill will, darkening moods, maternal protective wings turned to sharp blades slapped against the air. But in the nick of time comes a jolly-rumbling the little red truck, cozied with soft pillows and a flow of fresh air. On soft murmuring tires, a bit under-pressurized, it speeds silently away with the rescued little girl.

: Is a fathom underwater, the slow rise to avoid the bends; the hunched
spine straightens as the surface is breached; blue tinctures with droplets
of red; clad in a purple velvet robe, the child walks onto land.

A visitor can poke her finger into the bullet holes ripped by machine-gun fire in the side of the Fast Delivery truck parked in the National Museum of the Revolution in Havana.

A red truck corners left and tips on two wheels. The siren blazes down the escaping road
and cuts a diagonal through the body. One syllable at a time squeezes through the right
cochlea and spirals into the soundproofed room.

: Is the smell of wet feathers on a slaughtered chicken lifted and lowered
in boiling water three times, circa March 13, 1957, commingled with the
accelerating fast delivery of grief tumbled with rage, before it lifts into
the grey mist of sorrow.

: Is the trick of erasing the slaughter scene in the basement with an eraser
steeped in the scent of spilled blood. The scene enlivens again, this time
poured through the ragged metal bullet holes into the interior of the truck.

The ratchet of the newsreel stops; the still shot of the ten men killed inside the red Fast Delivery truck unrolls; a street child wheatpastes it on the inside of my mind.

: Is the flutter of torn scraps; fragments of what I said aloud waft toward
the bottom of the chasm; poem in the bottle I dropped into the Lamoille River
in Johnson, Vermont, 2001; downriver, the wrecked body of a red truck,
its chipped bright paint.

How the slow fade of the pulse of the dying men resists the stillness and is audible beneath these words; how red blood darkens to black.

The wonder of every something born of nothing materializes and dissolves away:
A red truck with the lettering scrubbed off barrels into and out of view,
leaving its afterimage, a wraith, to animate and populate with whatever you will.

The truck is crammed with misshapen blue, clear, and green-tinted glasses; some hold a jumble of numbers, others broken crayons; some will not spill under an infinite pour of liquid; one fills with tears tinctured with yellow dye, disguising them.

Only the first wave of assailants reached the palace. The second wave
was caught in traffic and didn’t make it to their fateful destination.

: Is a cathedral with small spider cracks emanating from tiny holes in the stained
glass clerestory. Once in a while, a droplet of blood squeezes through and splinters
into the nave.

: Is the climb up the marble stairs in the Palace; the concavity worn into the stone
by hundreds of footsteps; including Fulgencio Batista’s, who escaped assassination.

: Is the tender shifts and angles of my gaze, infinitely reproduced in facing mirrors;
the red truck a tiny speck upended on the retina.

From Brevity/Guilt:
Pumice. Blow away the dust. Pumice again.
A twist of the thumb smudges primary colors to pastels,
but the red dot at the center is a cry.

: is tracking droplets of blood to find an injured dog, sideswiped by a red truck.

Is the hiss and coil of steam rising from the radiator of the crippled Fast Delivery truck as it staggers to a stop.

: is not finding the dog.

: is seeping into the skin of the men who died in the Palace action:

When Grief Comes to You

When grief comes to you as a little red truck packed with explosives
make the way smooth under its tires.

When grief comes to you as a little red truck pushed by a twig of a girl
packed with explosives you will at last know who you are.

When grief comes to you as a little red truck pushed by a twig of a girl
packed with explosives whiplashed by his death
your heart will be marked with a red X.

When grief comes to you as a little red truck pushed by a twig of a girl
whiplashed by his death risen like a ghost packed with explosives,
you will write your name on your own face a thousand times,
and erase it again.

When grief comes to you packed with explosives, make the way smooth
under its tires. You will at last know who you are,
your heart marked with a red X. You will write its name on your own face
a thousand times, and write it again.