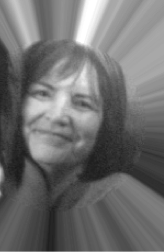 I wake up. Parched. My shoes are missing. My wife is gone. Dawn. I can make out a woman reflected in a mirror. I cannot locate the mirror. I rub away granules of sleep.

My lips are cracked, tongue swollen. It takes me until full blazing sun to realize I have awakened in a desert.

Definition: A desert loses more water than it receives.

What am I doing here? Even the glamorous camels, tassels and lashes and lips, file across the dunes coerced by thirst. My wife has told me that despite what teachers claim, the humps of camels are vessels of water. She also said that men shove stones into the wombs of camels so they will not bloom along the caravan.

I am wary of sand that is quick. I am slower.

To outwit heat madness, I differentiate and classify the sand grain by grain.

Under close examination in the clear glaze of morning I find the desert is made up of:

By midday my analysis shows it all to be:

which is, at its heart:

My wife lays it on how carbon-based beings tremble, worrying if silicon-based life should rise up, if circuitry even now (admitting to ancestors of stained glass and sandpaper), might hold digital, virtual hands to reconfigure the matrix of vast desert sands for its own evolution.

I reconsider. I write in the sand with my finger the list of its ingredients:

Turmeric and Saffron and Coriander and Cumin.

I comb through the drifts:

Ebony and Ivory and Garnet.

Black and White and Red All Over, my wife says any chance she gets.

I grind the sand in my teeth. After all, it is:

My wife told me of a man who drowned in his dry wheat bin. He may as well have suffocated in the Sahara. If this sand turned out to be a bin of wheat and if the sky opened to water it, and if each grain sprouted, would I prefer my corpse shrouded with tender wheatgrass? Perhaps I will prefer to end as a languorous skeleton in the sun.

By late afternoon I determine the desert is:

The sun is sinking. The cinnamon and sugar become:

I aim for the horizon, an optical illusion. No matter how far I crawl in this labyrinth of no walls to impede my passage, I cannot escape to the edge. Is my dread the circumference that taunts me, or the center that is everywhere?

I wish for shell or shard or cup or spoon to help me dig. I am feverish, wishing for a tool for my search rather than the object of my search.

I come upon a teaspoon.

If the object of my search is to exit, I must not be distracted by tomb or treasure or teaspoon.

If the object of my search were water, I would have only to smite the rock; wring out the cactus; dare the wadi’s flash flood. The object of my search is to quit my unmapped, hot desert, which does not signify its continent or its hemisphere. My desert is adrift and I am profoundly stranded.

The sky is vacant; the clouds have gone off with my wife. The sun sets, golden to bronze to vermilion to iron.

I bury myself in sand so I do not freeze in the night. Only my face is visible, like a porcelain plate lost from a picnic. The desert at night is all sky. The stars arrange their stories, the planets their destinations.

A reasonable man would assume that I have only to fall asleep to awaken once more back in my room. Perhaps my wife will be there.

Dawn again. Desert still. The woman in the mirror had burrowed beside me. Sandman has been at my eyes, Thanatos close behind.

Who put me here? Did my wife leave with such force that I, by counterforce, was slammed in the opposite direction into this desert? Newton’s Third Law. Does this mean she is in a green and blue, populated, opulent place?

Others have endured the thrall of the desert. I count them on the fingers of one hand:

Hmm, even to count on the fingers of one hand is an unreliable technique in this shimmering heat.

I piss letters onto the sand to watch them evaporate. I do not have enough for two legs of an X. Insufficient spit to dot an i.

The temptation of the desert is solitude. Oblivion. I lie on my back making sand angels.

The sun, a cruel, slapdash circle, begins to sink.

Exhausted from crawling, my nose a burnt triangle stuck on my balloon head, my tatters all zigzags, cattle skull in the corner.

My desert and I might be wrapped in a solid rectangle. Have I been dropped into a cartoon?

Requirements for the Classic Desert Cartoon (Sub-Category of the Desert Island Cartoon):

I am not in a cartoon; the last thread of my shirt has wafted over the dunes, futile cover from sun, predators. I am too naked for The New Yorker’s conventions of two-dimensional lines. The landscape also is naked, missing the gardens, the fountains, the doors and windows we cannot spare from our dreams.

My wife says that although we cannot control the events that befall us, we can choose the genre in which we perform.

I may fall sleep and awaken in my room, my wife bringing me a little water.

I wake up. Third day in the desert.

I long for my pre-desolate Sunday mornings, waking to a long embrace, then rising to make my wife her tea, sliced melon, very thin toast with lingonberry jam.

How will I find nourishment in my wasteland? Three possible solutions:

The first we learned in the first grade: I can eat the sand-which-is-there. The older the joke the better my wife likes it.

The second we learned in the second grade: A simple misspelling will replace the desert with cakes and pies.

The third we learned in the third grade: we can go for weeks without food, but only three days without water.

So, never mind food, but today I must exit the desert or obtain a drop of water.

Definition: A desert is the figure of the desire for water.

Riddle: How is a desert the figure of love?

My wife told me that in a drought a man severs a vein of his beloved horse to drink its blood.

A chunk of sky falls, luring me with shimmering dunes like a lake. A mirage is not a fantasy; it’s as real as a rainbow, my wife has told me, a matter of refracting light.

My one hope for escape is to locate the portal of the mirage. If I can precisely map it, I can reach the woman in the mirror and will be able to rescue us both from this desert.

I. Sprinkle sugar on it.

Mirages are as insubstantial as shadows are verifiable. I cast a long afternoon shadow, but I cannot crawl under it. I need only to outline the glassy edges of the mirage as well as where its shadow would fall if the mirage were opaque. Outlining a mirage is not as simple as drawing a chalk line around a corpse.

Make a drawing of its shape before it materializes; compel it to pour itself into the awaiting pattern. Setting a trap for a mirage is not as simple as snaring a tiger.

I stop still and the desert does the crawling. The hillsides undulate like a woman rolling over. My wife could model for the rising, arching, parting, swelling, enfolding. I watch the sand until it closes my eyes.

Sand insinuates, erodes, polishes my body’s mounds and creases until I am an undulating woman.

I am uneasy about jinn hurling from whirlwinds.

My wife once wrote out an ancient recipe:

Go into the desert.

Wait for a jinni to grasp you,

pull out your entrails,

wash them in burning sand.

You rise up a poet.

My animal companions gather about me at sundown: the rattler is North American; the lion had been with St Jerome in the Desert of Calchis. The fan-tailed raven brings no bread; the scapegoat is pinned all over with sins; the lizards go for one another’s colored throats. The fox takes to the high places.

The spoon ran away with my wife.

I wish I had a stick to draw pictures of the animals.

I trip over a stick.

Though the beasts draw their own ephemeral pictures as they run or slither or fly, they pose serenely for their portraits I draw with a stick. My wife would call them stick figures. The animals watch as their handsome countenances scatter in the wind. They have not spoken since Adam named them. This is the single difference between beasts and human animals, I might say to my wife. She would become quarrelsome.

The moon appears. I am faint from dehydration. If I could lift the hem of the mirage and float into its cool, wavering light, I would not lie here exposed, waiting for the icy stars.

I detect a jinni raising his hand to me. He calls out to my animals like old friends.

The jinni has only three fingers, though in this light he could have a hundred. My wife told me they offer only three wishes, as to offer more would exceed their talons.

I courageously challenge him: Don’t jinn pleat themselves into lamps to spring out and grant wishes?

It is so, says the jinni.

I get three wishes; that’s the custom.

It is so, says the jinni. One left.

Wait. That spoon was just lying there half-buried. I just tripped over that stick. I used it to draw pictures of the beasts.

You draw a good snake. But not a good lion. One left. He spells out my options so I will not be foolish, as though I might stupidly choose ice cream or a mermaid. He counts on his claw:

Wish for the woman in the mirage to take you in; but once in, there is no out.

Wish to remain in the desert as a sand- turning woman.

Wish for a writing desk inlaid with mother-of-pearl.

What about my wife?

If you choose the writing desk, you can write a letter to your wife. She may not receive the letter. The jinni bats his eyes. Or open the letter. Or write back. Or come home.

Why can’t I wish for my wife?

She has her own wishes. Two left. He holds up his other hand with two curved nails extended, showing one of her wishes was already spent. Generations of recluses in the wilderness, says the jinni, will dispute your choice in their poems. This is a great boon I have granted you, beyond wishes.

The sky is ink. The sand is paper.