This killer whale broke surface twelve feet out, arching its oily mass out from the water, and then it dove, aimed in our direction. One of us grabbed the shotgun. Our catch was good, but orcas could eat our salmon right through the nets, swarm us in packs of up to forty. We knew the risks. It was the wretched ‘blackfish.’ We’d heard how a pack of them had come up on a whaler’s catch recently, attacking its haul in a fury of relayed darts and tears, mucking up the water with their methodical peeling back of the blue whale’s skin.

With the top speed of any sea creature, we figured this one could ram us into a tumble, and then skin us open. Or maybe just chomp us in one go. Unloading a few rounds into its blubber would at least scare it off, if not bleed it out in a few days’ time.

“No, no,” Ned said, swatting his hand backward at us without turning around. Even the military bombed the hell out of these whales to clear the water, but Ned had his own ideas about orcas. Instead of being tense, Ned was an enlivened beam of his usual energy, his back straight and rigid, head set to the waves beyond. He wasn’t saying anything, which meant he was thinking and dreaming the way he did, like how he’d had us bring in live fish to showcase at the World’s Fair and paint a sign with one of those black devils on it.

He’d had us put it up to announce the 6,000-square-foot waterfront space adjacent to the fair’s helicopter terminal. Most of the aquarium tanks were empty, aside from the lumpsuckers, pipefish, and other Puget Sound specimens, and a few warm water tanks holding seahorses and tropical fish, but it had already become the city’s main attraction.

“Now people can watch bull cod hatch a mess of little codfish right before their eyes,” Neddy had told the local papers. “Something even most skin divers have never seen.”

“Would you look at that!” he said now. “The big boy’s headed this way!”

We forced chuckles from our nerves, and then said to Ned, “A boy, you say? You got a name picked out?” It was a joke, and we laughed, but Ned didn’t, didn’t even hear us, and this made us wonder what he could be thinking. What he could possibly have on his mind, as the beast spouted close enough to expel a faint fish scent and then show us the flap tightening over its blowhole as it sucked air.

“Whoa-ho!” we shouted with tremored excitement, readying the shotgun. It was a magnificent, terrible thing, that slippery beast in the water so full of contradictions — immense, but nimble; threatening, but curious; foreign, yet so damn close. It was a thrill. So dangerous the way Ned was stepping his foot onto the low rail to hoist himself up. The way he began leaning over the boat’s edge.

The beast’s head emerged right there, right next to us. It was bluntnosed and had a patch of white in front and above its black, marble-ish eyeball that slipped with unexpected dexterity. We’d never been so close to one before — its tank of a body pushing water gracefully off its sides, tipping to show its moving, single wet orb of an eye.

“You wanna die, Neddy?” we called to him, our humor wearing thin and adrenaline rising high. That was Ned for ‘ya, speaking to animals as if they’d be compelled to answer, his energy cheerful, yet forever serious. “A marvel!” he said, certain, with his all-knowing gleam, as the mass of skin dipped back under, pushing deep with its wide ukes, and leaving behind oily rings in the water.

Ned, now standing on a higher rail and leaning out past the side of the boat, peered down in amazement still. “He saw me!” he told us. “He looked right at me!” We looked to each other with a knowing concern, but also the unspoken question: what does he mean? What is Neddy thinking this time?

We watched and wondered, sensing how deeply Ned yearned for the animal to reemerge, how fanatical he’d silently become. We could see how he wanted the whale to find him there, still looking back at it with that unguarded wonder, a wonder that grew and grew far beyond Ned’s little self, far beyond us, yet Ned was one to always reach for it, to extend.

“Friend, friend!” he called to the animal that was nowhere in sight, one of us with the gun pointed at the unending expanse of water, unable to anticipate what would come next, though in a way having expected it all along, having begun to crave the rush of whatever brewed in the electrified eyes and erect posture of our longtime friend.

We couldn’t know exactly how he would bend the world to his own designs. Only that he could, was capable. Willing.

A dark shadow passed under the boat, the white patches of the beast showing even through the pale green water, then disappearing beneath, and before we could shout a word of caution, before we even understood one was needed, Ned burst, saying “I will join you!” and dropped himself in.

“Jesus! Get ‘outta there!” Had he jumped? Had the beast nudged the boat undetected, drawing Ned in with a force beyond our senses?

We tossed a lifesaver that smacked the water behind him, but he did not turn around. We hesitated to jump in after him.

“Neddy, c’mon!” we said, angered by our inability to see this one coming, the impulsiveness, the adrenaline quickening in our necks like netted fish. The forty-nine degree temps alone would be a shock, let alone the mass of blubber roaming deep. Those puzzle-perfect teeth.

Ned floated there, treading, with an occasional slap of water, unrushed, unconcerned, peering out over the vast ocean, and in deep. That was when we knew he wouldn’t be turning back. None of us would.
Nicole Miyashiro 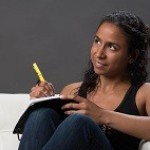 Nicole Miyashiro is a writer-in-residence with the PA Center for the Book at Penn State University. Her work appears in CALYX, The Hudson Review, the Nasty Women Poets anthology, and elsewhere. Some of her poems can be heard in Words of Art, an online collection of ekphrastic pieces.