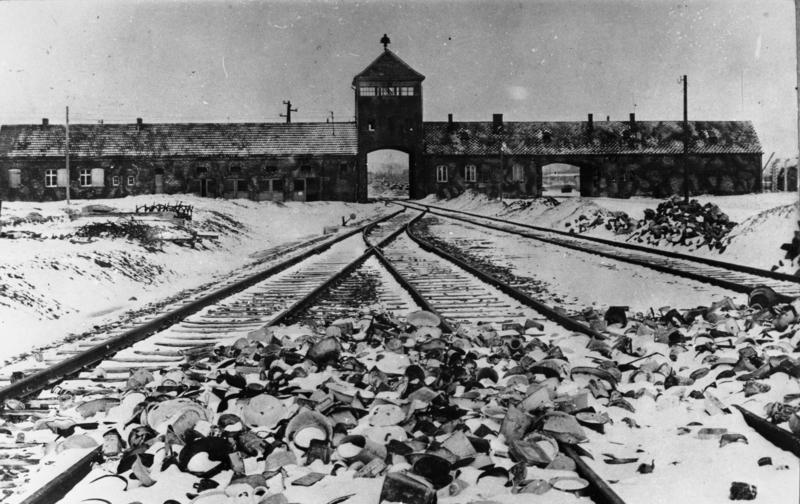 SNCF: One Group: 5 Divisions: A major industrial services group, we are a world leader in transporting people and goods. (www.sncf.com)

I anticipated attending a Shabbat service to honor my grandfather, but I wound up honoring 76,000 more. My rabbi recited the Kaadish prayer, acknowledging yarhtzites, saying blessings for those dead and for those ill. Then he introduced Aaron J. Greenfield, the senior director of government strategies at Duane Morris, speaking on behalf of 91 year-old Leo Bretholz. After Germany annexed Austria in 1938 Leo’s mother, urged him to flee for fear he’d be murdered by the Nazis. And after swimming across the Sauer River to Luxemburg a refugee group managed to smuggle Leo into Belgium, where he was able to escape into France. In 1942 however, he was arrested by a French railway operative in Paris, and sent to ride in a cattle car headed for a concentration camp. He, however, managed to escape by rubbing feces from the unsanitary conditions on the railway bars; he pried them open and he leapt down to a freedom that he and only 3% of the others would know below. The train company was paid per head, per kilometer to transport Leo and 76,000 other Jews and U.S. and Canadian prisoners of war to death camps.

Leo in addition to five holocaust survivors and or descendants of, stood on our temple’s bema. Each recited a separate memorial prayer, one for each of the millions of Jews killed. Together we repeated: “We will not forget.” I cried, not for my grandfather, but for someone who missed theirs, and not to natural causes, but from torment. Aaron Greenfield translated more of Leo’s story: a crippled woman held a toddler — not her own — sitting for three days in the train’s cramped rail car. I thought of this woman and of the others. She could have been mine; those could have been my parents, my children. I said “I will not forget.”

If you open the windows to the Société Nationale des Chemins de fer Français (SNCF) home page, you’d first see that they broke the world record in 2008; they have the highest wheel rail speed train called the TVG (the Grande Vitesse, or high speed railway). My Jewish friend Max, a French major, recently did an internship in Paris and said that the “(SNCF’s) TVG is the fastest, most efficient train I’ve ever been on. It’s incredible; you’ll get a high like you do on an amusement park ride.” Next you’d find that they currently have 421 on-going projects in 44 different countries. Twenty acclaimed British companies recently met to discuss SNCF managing their commuter trains surrounding London. It plans to lay 12,000 kilometers of tracks to deliver Chinese goods via Europe in the next two years; and Forbes Magazine in 2012 ranked SNCF 214 out of its Fortune 500 companies. Behind the third fastest Dutch railway system known as Deushe Bahn and Khuane + Nagel, the SNCF ranks fourth in the world to being the leading railway system of all times. However, if you walk back through this French rail system, back to its history, you might find some information locked away. Because behind them is a secret; skeletons you might say or ghosts of them, that amount to 76,000 due to SNCF driving them to their deaths.

I read in the Baltimore Sun about Ellen Lightman, a Jewish women who lives nearby me in a Jewish neighborhood. Ellen gained press when she began lobbying for legislation demanding that SNCF reveal any history of transporting Jews to concentration camps. Her great-grandmother, grandmother, and aunt were all killed after being transported by SNCF. I had walked through my temple before, seeing relics of old Torahs, the rabbinical robes salvaged when the Nazis looted Jewish towns, pillaging and burning religious artifacts. It never crossed my mind that a contributer to loss, a company, could be the one to transport me to my very own temple in the future.

When I searched for a reason for why the SNCF agreed to exchange payment for transporting Jews like Ellen Lightman’s grandmother, I found not even a formal admittance. Whichever skeleton they had, they were trying hard to keep it a secret. The closest I got was by going to their “News” tab under their “Culture” file explaining how other countries resisted the Nazi invasions between 1938 through 1944:

Between 1939 and 1945 millions of men and women joined the Resistance against Nazi Germany. The activities of the French Resistance during the Second World War are widely known about in France. But what happened elsewhere, in other countries? How were these and Germany itself co-ordinated? How did the Polish, Greek and Danish Resistance take action?

Once I realized through Ellen Lightman that the SNCF had put in a bid to manage the commuter rail lines between Baltimore and Washington in my own state, the memory of the holocaust survivors at my temple arose. . The only claim against SNCF that prevailed was from the Lipitz family in Toulouse,France. According to the Coalition for Holocaust Rail Justice, the trial was handled by the Counsel D’état, the highest court in France which normally presided over government matters. As their defense, the SNCF said that during WWII they acted as a private enterprise, separate from the French government. And why did they do this? Because the Counsil D’Etat handles government functions and not small business ones, and SNCF was claiming that they were one. This railway was not acting as an arm of the French government, they were acting as a small company turning a profit with Nazi Germany.

Other than my own, this French railway has made bids in my home state of Florida, and where my cousin lives in California. My grandmother, whose ancestors were German Jews, lived in and around Tampa Bay, Florida, where a prospective railway was to be built connecting it to the city of Orlando. According to the Scrapbookpages Blog, the SNCF donated $70,000 dollars to a conference in Florida about the holocaust for educational purposes. Was this the railway’s way of saying sorry? The conference, to be attended to by Jewish teachers, was cancelled by the Florida Educational Commissioner Gerard Robinson because teachers refused a seminar funded by “tainted money” [1][2] . I read about more of their donations and clicked on one at the University of California Sacramento’s page. At a recent exhibition, the SNCF had spent thousands and thousands of dollars funding an informational room about the holocaust and its survivors. This came two months after California had put in a 48 billion dollar bid for funds from Obama’s stimulus package: high speed rail lines from Los Angeles to San Francisco.

The SNCF has never directly said sorry to the families and victims of concentration camps. And, other than the Lipitz family, no other form of retribution has been given to these families who, in Leo’s case, had his stamp collection and watch (the only items he owned) confiscated and never returned. Why then is this railway now starting to apologize for deaths and items confiscated?

Aaron J. Greenfield cited in his speech during my Friday night’s Shabbos that it was not until November 4, 2010, 65 years after, that the chairman of it, Guillaume Pepy apologized for the deportations. This apology came only two months after news media stations such as CNN reported on September 6, 2010 that Obama had passed a stimulus bill: 50 billion dollars to be spent on highways and railroads to increase jobs in the United States.

As I look at my own state of Maryland, and the different railway companies making bids on our state’s Area Regional Commuter, the MARC train, to connect the Brunswick line with the Camden, we are receiving bids from SNCF. After contacting Aaron J. Greenfield I was ecstatic to find out he’d advocated and assisted in passing legislation which required SNCF to disclose information and records regarding their involvement with the holocaust. While he has done his part to prevent SNCF from building in our community, I need to do mine. I know there are probably skeletons in everyone’s closet but SNCF’s are hoping theirs will leave. For all of the deaths, the voices muted, we need to make their message come alive: no matter how many records broken, SNCF cannot undo the record for contributing to how much lost. The door to its skeletons are wide open and I want to make sure that it does not lock; for I for one will never ever forget.

Tracy Hauser is an MFA graduate student at the University of Baltimore’s Creative Writing & Publishing Arts program. Currently she has been published in the latest issue of Abandoned Towers Magazine, Urbanite, Epiphany Magazine, Marco Polo Arts Magazine, The Rusty Nail, and for the 2012 4th edition of Welcome Hon, You’re in Baltimore!. She is involved around the city in promoting writing through project-based learning activities for schools and organizations.

Tracy Hauser is an MFA graduate student at the University of Baltimore’s Creative Writing & Publishing Arts program. Currently she has been published in the latest issue of Abandoned Towers Magazine, the Urbanite, Epiphany Magazine, Marco Polo Arts Magazine, The Rusty Nail, and for the 2012 4th edition of Welcome Hon, You're in Baltimore!. She is involved around the city in promoting writing through project-based learning activities for schools and organizations.