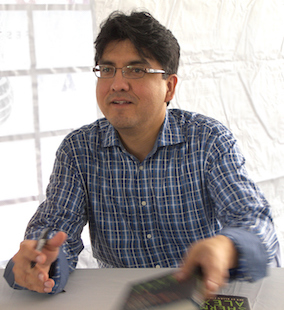 There was an early expectation that Sherman Alexie would suffer mental retardation because he was born with hydrocephalus (or, water in the brain). He underwent brain surgery, and he suffered seizures throughout his childhood.

He planned to be a doctor, following an uncle’s suggestion that after credentialing, he return to help his reservation; so in college, he enrolled in a pre-med track.

Some Native Americans have reacted to his success by calling him a “fucking apple”—white on the inside and red on the outside—for having “sold out” to corporate publishing. His response: “Get off the reservation and make your own luck happen.”

Sherman Alexie grew up on the Spokane Indian Reservation.

When he found his mother’s name written in a textbook assigned to him at the reservation school, he made a decision right then that he would not attend the reservation high school.

Sherman Alexie is a contemporary novelist, poet, short story writer, screenwriter, film director, and comedian who is not always celebrated by his fellow Native Americans. He overcame physical and socio-economic adversity and broke out of the reservation mentality he describes in his poetry, prose, and films. He is an award winner in all three areas and gives highly animated and entertaining interviews.

Sherman J. Alexie, Jr., a Spokane/Coeur d’Alene Indian, was born in October of 1966 and grew up on the Spokane Indian Reservation in Wellpinit, Washington, about 50 miles northwest of Spokane.

He was born a hydrocephalic (water on the brain), and underwent brain surgery at the age of six months without the doctors or his parents expecting him to survive. When he did survive, the prognosis was that he would live with severe mental retardation.

In spite of these adversities, Alexie learned to read by age three, and was reading novels by age five. All these things separated him from his peers at an early age, making him the object of ridicule on the reservation. Consequently, he discovered his own isolation within his reservation that was in itself an isolation from the rest of America.

As a teenager, he made a conscious decision to attend high school off the reservation in Reardan, about 20 miles south of Wellpinit, where he suspected he would get a better education. At Reardan High, he was the only Indian (apart for the school mascot). He performed well academically and became a standout player on the basketball team. He was the high-school class president, but he points out that earlier on the reservation, he was a bookworm whose nose was broken six times by bullies. This collection of middle school and high school experiences ultimately inspired his first young adult novel, The Absolutely True Diary of a Part-time Indian.

In 1985 after Alexie graduated from Reardan High School, he attended Gonzaga University in Spokane, on a scholarship. After two years at Gonzaga, he transferred to Washington State University (WSU)  as a pre-med student.  Alexie’s plan to become a doctor was set aside after he fainted several times in human anatomy class, and he soon found another path after he found his way into a poetry workshop at WSU.

Alexie developed a problem with alcohol at Gonzaga, but after learning that Hanging Loose Press agreed to publish The Business of Fancydancing, he immediately gave up drinking at the age of twenty-three. He has stayed sober ever since.

Alexie has done stand-up comedy with musician Jim Boyd, a Colville Indian. They collaborated to record the album Reservation Blues, which contains songs from the book of the same name. In 1996, Boyd and Alexie opened for the Indigo Girls at a concert to benefit the Honor the Earth Campaign.

In 1997, Alexie embarked on another artistic collaboration with Chris Eyre, a Cheyenne/Arapaho Indian, who discovered Alexie’s writing while at the New York University’s film school. They collaborated on a film project inspired by Alexie’s “This is What it Means to Say Phoenix, Arizona,” a short story from The Lone Ranger and Tonto Fistfight in Heaven. Shadow Catcher Entertainment produced the film that was released as Smoke Signals at the Sundance Film Festival in January 1998. The film won two awards: the Audience Award and the Filmmakers Trophy.

After success at Sundance, Smoke Signals was distributed by Miramax Films in 1998 and in 1999, the film earned a Christopher Award, an award presented to the creators of artistic works “which affirm the highest values of the human spirit.” Subsequently, Alexie was also nominated for the Independent Feature Project/West (now Film Independent) 1999 Independent Spirit Award for Best First Screenplay.

In 2002, Alexie made his debut as a director with The Business of Fancydancing. He wrote the screenplay based loosely on his first poetry collection. The film was produced and distributed independently, and subsequently earned numerous film festival awards.

Alexie lives in Seattle with his wife, Diane, and two sons.

The year after he left WSU, his poetry collections, The Business of Fancydancing and I Would Steal Horses, were published. His first collection of short stories, The Lone Ranger and Tonto Fistfight in Heaven, was published by Atlantic Monthly Press in 1993, earning a PEN/Hemingway Award for Best First Book of Fiction and a Lila Wallace-Reader’s Digest Writers’ Award.

In 1998, Alexie competed in and won his first World Heavyweight Poetry Bout competition in June 1998 in Taos, New Mexico. He went up against then world champion Jimmy Santiago Baca. During the next three years, he went on to win the title again and again, becoming the first and only poet to hold the title for four consecutive years.

Some, like author and critic Gloria Bird (Spokane), argue that a work by a Native American author is capable of subverting Native American identity and sovereignty by idealizing preconceptions that form an outsider’s mythologies of the American Indian. Essayist Nicolas Myers insists that Alexie shouldn’t be painted with this brush and is adamant that Alexie’s Reservation Blues does not promote any totalizing representations. While the novel does addresses many mythologies, it is done in an exaggerated and ironic manner. It “never falls into a trap of stereotypical representation because it never allows for fixed representation of any kind.”

Alexie’s imagination plays tricks on the reader and Professor Kenneth Lincoln sees him as the best Native American example of one stealing into Olympus to claim legitimacy while neither proving himself to be the “bungling host” nor “the agile parasite.” Throughout Reservation Blues there are “mirrors that redirect any determined gaze until the readers find themselves gliding along with the characters—on an unstoppable ride of laughing, gut-wrenching indeterminacy,” says Myers in his recalibration of Gloria Bird’s criticism of Alexie for exaggerating the negative dimensions of life on a reservation while side stepping the obligation she feels he has to present his community in a more positive light. There is more to Alexie’s exaggeration than this. There is a deliberate technique being used here that is familiar to readers of Latin American Magical Realism, where exaggeration and hyperbole are often utilized to convey a sense of the unreality of the real—a point made and explained by Gabriel García Márquez in his acceptance speech for the Nobel Prize.

An example of Alexie’s exaggeration is the character Lester FallsApart who, Alexie tells us, is the most accomplished drunk on the Spokane Reservation and a tribal hero because Indians always flock to the kindest alcoholic on the reservation. The Spokane Indian Reservation loved Lester so much that hundreds came to his dog’s wake and funeral.

A first reading might see this as reinforcing the drunken-Indian stereotype. But the products of these exaggerations and the logic of all of it should be seen differently: “The hyperbolic embrace of Lester is analogous to a very real embrace of the vice—a strong critique, in my opinion, of a particular aspect of reservation culture,” writes Myers.  This conclusion is reinforced by the fact Lester FallsApart is often Alexie’s alter ego when he takes the stage, as well as a recurring character in his fiction and his poetry.

A Few of Alexie’s Quotes

“Up until now, I’ve always written Joshua B. stories. I felt so conflicted about having fled the rez as a kid that I created a whole literary career that left me there. The lesson of both the young-adult book and in a sense the new book is ‘Get off the rez. Be nomadic.’ ” (Konigsberg interview)

“I’d rather see myself played by a Puerto Rican or an Italian with a tan than have them ruin the basketballness of me.” (Konigsberg interview)

“The social pressures, the social rules inside the Indian world, and the essential conservatism, big C and little c, of Indian people, is something that outsiders rarely understand. I mean, Indian communities are theocracies.” (Nelson interview)

A Few Quotes about Alexie

“Sherman Alexie doesn’t believe there is such a thing as selling out. He has no qualms about his commercial breakthrough’s coming when he wrote a young-adult novel, The Absolutely True Diary of a Part-Time Indian, despite the fact that he had already published 18 volumes of fiction and poetry to considerably less fanfare.” (Konigsberg)

“In War Dances he has given readers a few characters of indeterminate ethnicity for the first time.” (Konigsberg)

“But while I was silent, Sherman Alexie wrote the truth. In his books, I found all the ugly and beautiful stories of reservation life laid out right there on the page, for millions to read. He wrote about our poverty, addiction, and repeated cycles of violence and despair. I both envied and resented the freedom and openness of his words.” (Purser)

“His work is wizened with poetic anger, ribald love, and whipsaw humor. The crazy-heart bear is dancing comically, riding a wobbly unicycle, tossing overripe tomatoes at his audience.” (Lincoln)

2007—National Book Award in Young People’s Literature for his young adult novel The Absolutely True Diary of a Part-Time Indian.

Lone Ranger and Tonto Fistfight in Heaven, The Business of Fancydancing, and The Absolutely True Diary of a Part-Time Indian