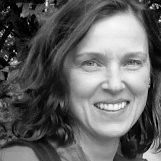 Darlene Pagán teaches creative writing and literature at Pacific University in Oregon. She published a poetry chapbook, Blue Ghosts (Finishing Line Press 2011), and a full-length collection, Setting the Fires (Airlie Press 2015). Individual poems have appeared in journals such as Field, Calyx, Hayden’s Ferry Review, Poet Lore, Hiram Poetry Review, and Hawaii Pacific Review, and also earned nominations for the Pushcart Prize and Best of the Net. Her essays have appeared in venues such as Brevity, The Nebraska Review, and Literal Latté. She adores her family, swimming, hiking, beaches, the rain, the moon, and roller coasters.

Darlene Pagán: I write because I have to. Writing is the only way I know to truly understand the complexities of what it means to be fully alive and fully present in the world, and in a body that is rife with contradictions. Mothers everywhere inspire me and children.

Darlene Pagán: I would love to arm wrestle Isabelle Allende. She has such passion and fire, such a talent for storytelling that we’d be sure to laugh and tell stories during a match that would likely last an evening if I could help it.

Darlene Pagán: My activism in word and deed.