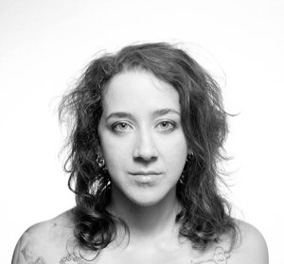 After we discovered the gene for fortune-telling, hot-
waxed the dog boys, distilled a snake oil to separate the
last conjoined twin, and found live unicorns in Vietnam,

the carnivals all folded. The barkers packed up and moved
home to work at Verizon or Sears. Midways were ghost
towns of abandoned curiosities. Taxidermy. Pitch cards.

Their clothes were always a little dirty, slightly worn,
though generally stageworthy in intent. Broken sequins.
Matted furs. Fedoras and berets. They all hitchhiked.

on her tabby’s heartbeat. Baffled seasoned gamblers
by giving probabilities instead of odds. Joked she was
banned in infinite states. Dynamic Dan was a medium.

His Manx bridged dimensions and knew Morse code.
Dan tapped the box to receive mews from the Beyond.
Kitty Quarks was famous because if you slipped her fifty

she’d crack the box. She’d take the rubes every time,
but she just stuck an old mirror in there so they’d glimpse
their own faces. The other Mechanics didn’t respect her

one bit. Of course, it was a fad. Of course, most of the
boxes were empty. Actually empty. But there were a
few years there when they held on, moving on the last

currents of wonder, spending dead currency of glamorous
ignorance, shouting step right up, as if our limits could be
measured, as if there was something we could not know. Jade Sylvan has been published in PANK, Bayou, Basalt, BuzzFeed, The Sun, Word Riot, and others. Jade was the winner of the 2011 Bayou Editor’s Poetry Prize and was a finalist in the 2012 Basalt Bunchgrass Poetry Prize and the 2012 Write Bloody Book Competition. Jade has a book of poetry out (The Spark Singer, 2009, Spuyten Duyvil Press), and a nonfiction novel, Kissing Oscar Wilde, coming out later this year on Write Bloody press.