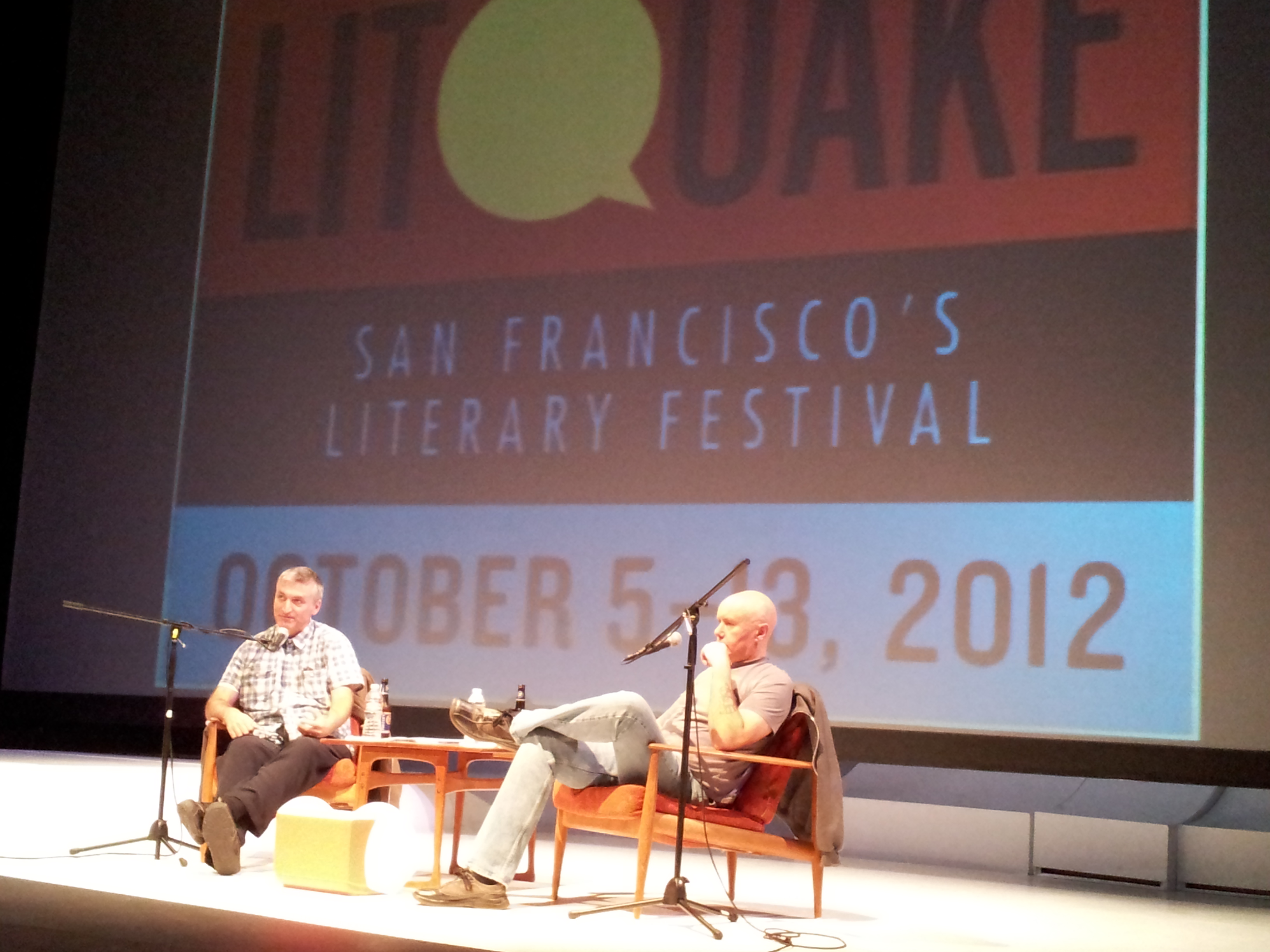 Opening event of San Francisco’s 2012 LitQuake. An interview and reading with Irvine Welsh, best known for his novel turned screenplay virtuosity, Trainspotting. The interview was conducted by Alan Black, the man that produced the U.S. premier of the stage version of Trainspotting in 1996. Welsh, a novelist, screenwriter, producer, and actor, was a talent not to miss.

In spite of having no idea what Welsh said half the time, cue the Scottish accent, I laughed through most of his interview and the reading from his newest novel Skagboys. Welsh delivered repeated nail gun sound effects and a slew of cursing only a Scot can affect with such grace. The turning point was Welsh squatting and rolling off “shite,” then sharing which of his characters could make the longest, most perfect shite. Somehow he managed to bring this all around to a point later in the novel when the protagonist was almost shot with a nail gun and couldn’t shite himself due to his empty bowels, a result of the previous scene. An odd but inspired method of storytelling.

In a post-reading screening of Trainspotting, I understood why Welsh enjoys feces so much—Ewan McGregor, hand reaching into Dante-esque toilet to recover lost drugs. Man at his worst. Rent the movie, and eat your dinner a few hours later. You won’t be sorry.

What motivates Welsh to write about shite? According to him, fascination with failure. During the interview Black and Welsh discussed his view that a fear of success is what often leads to failure. Write what is important, regardless of convention, even if it’s life in the toilet. For Welsh, it’s all about how people mess up. That’s his story fodder. He also shared how he came by his original ideas for Trainspotting. While riding a Greyhound bus through America, he kept a journal that ended up more fiction than fact. So he figured, why not write a book on it?

Fans of Welsh’s works are familiar with his violence motif, something Welsh says is very much part of Scottish culture. No guns. Plenty of fists and knives. In an interesting anecdote, he shared the surprise by his American wife at the chaos and police cars on every corner. My experience as a tourist in Scotland revealed a different picture of Scotland, one that revolved around castles and deep-fried haggis. Welsh delivers a richer more trench experience for his readers. He is not a writer for the casual tourist seeking beautiful, rolling meadows.

As Black finished the Q&A with political thoughts, Welsh remarked on Romney’s intentions. Something along the lines of for a guy who wants to be president, he sure doesn’t seem to want to be. Then he referred to the Republican Party as the American Taliban. Extreme? Maybe. Then again, a Scot who writes about feces, probably knows his shite.

Justin Sloan is a student in The Johns Hopkins University M. A. in Writing Program. His fiction has been published in O-Dark-Thirty. Read more at justinmsloan.com.