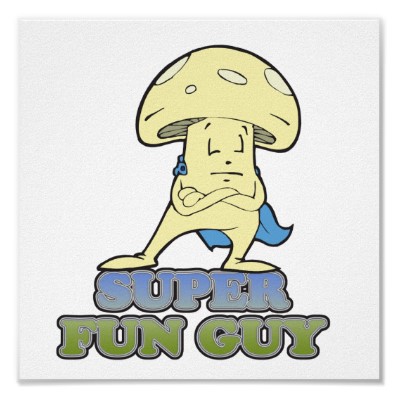 The first time I took mushrooms I thought it would feel trippy to eat a carrot. Whenever I eat carrots, though, I always get the hiccups. Thus, the first time I ever tripped on mushrooms I got the hiccups and thought the world was bouncing around me, like some sing-a-long ball on the bottom of the screen that everyone in the room was following along with to their random expressions of nonsensical matter. My best friend was there, tripping as well, and she thought I looked like a drunk elf. This image, for some reason, made her puke on the white carpet. My mother, thank god, was not home. I wanted to look at her puke because I was sure it would look swirly-pretty, but she blockaded the hallway from me and I settled in on watching the designs on the carpet bounce around with my hiccups.

The second time I tripped on mushrooms was an utter fail, as my friends and I went foraging for them at midnight in the dewy cow pastures of small town Texas. But the mushrooms we picked looked eerily similar to incredibly poisonous ones (thank you internet and the people who actually post pictures of good vs bad shrooms online), so none of us were brave enough to try them. We settled on getting stoned, avoiding the fact that our hands smelled like manure.

For the third time I tripped on mushrooms, I was in a house full of ten tripping people, not a sober person in sight. One of the women had OCD and broke her favorite beaded necklace, because the drugs made her ultra-compulsive, made her continuously feel their texture in her tripping hands. The thin white rope of the necklace broke and beads soon splattered onto the white tiled floor. She lost it. She was crying and confused, unable to grasp the fact that she actually just broke what was most dear to her. The red puffyness accumulating on her face made me think her skin was starting to grow radishes. It was a horrible sight. She was ruining our trip with her freak-out, so we called someone to come and pick her up, but no one could remember the directions to how we got to the house we were at. Directions + hallucinogens = nothing. You just can’t think in a straight-forward, here-let-me-give-you-directions sort of way when everyone looks like elves and candles are the most fascinating and spiritual creation, ever. As I avoided the OCD freak-out chick, I found myself on the deck, thinking that the ground looked like it had lungs and was breathing heavily. We cannot step on the ground! I yelled to no one in particular.

And I remembered the game I used to play when I was a kid. How I would wake up in the morning, and tell myself I wasn’t really awake until my feet hit the ground. Each morning I threw every pillow and stuffed animal onto my floor, then traipsed across the room on them, seeing how long I could go without being “officially” awake. My own way of preparing myself for a mind that wanted to break the rules, to find its own weird reasoning, to see the world as something that was magical.

Chelsey Clammer received her MA in Women’s Studies from Loyola University Chicago. She has been published in THIS, Revolution House, Spittoon, and Make/shift among many others. She is currently working on a collection of essays about finding the concept of home in the body. You can read more about her here: www.chelseyclammer.wordpress.com.

One Reply to “Psilocybe Cyanescens”