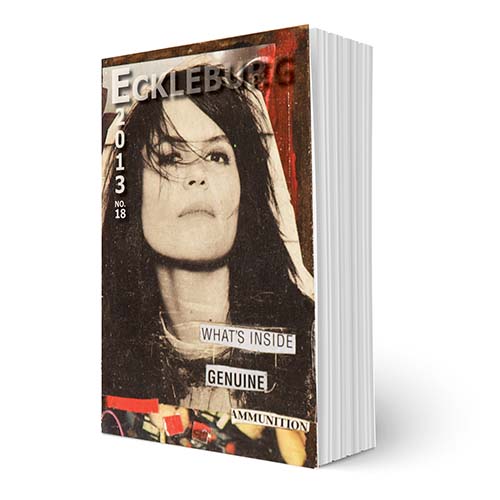 Eckleburg thanks our talented contributors whose work we are honored to publish in Eckleburg No. 18.

POETRY
Common | NICHOLAS YB WONG
Portrait d’Erik Satie | MOIRA EGAN
After Being Asked to Write a Villanelle, DAVID WAGONER
Terms of Use | JOSEPH A. W. QUINTELA
Controlled Hallucinations | JOHN SILBEY WILLIAMS
What I Imagine the Man Wearing the Neon Green Lacoste Polo Hitting on the Blonde with the Halter Top Would Be Saying If He Were an Intellectual | JESSE DAMIANI
Of Brains or Bowels or Lungs, Leopards, Finches | NATHAN BLAKE
Red Market | LINDSAY LUSBY
To Adam | BILLIE TADROS
Women and Children First | LINDSAY LUSBY

ESSAY
from Something Wrong with Her: A Hybrid Memoir | CRIS MAZZA