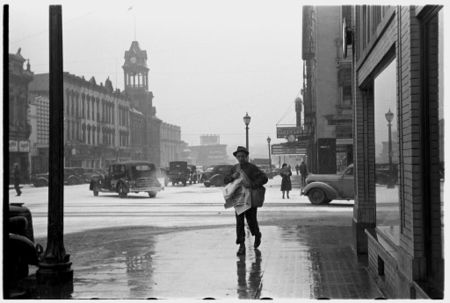 I was down again. I was with my friend Brian who is not really someone I see so much or even care to see so much but when we get together there is a connection. Maybe it’s the booze or maybe it’s those thick black glasses he wears and that rough dark haircut that looks like a box. He looks like a 1950s beat and talks with conviction, damns his old film professors for being idiots — the very reason he dropped out of school — and tosses pizzas for a living. He loves noise music and drinks tall glasses of Jim Beam. He’s been to jail more than once, gets booked on dumb charges, and ends up sitting there with real criminals. Not to say any of these things are accomplishments in the traditional sense, but really, it’s his attitude about it. He pushes through life and understands that there is value in every experience. I am horrified by jail but Brian, who doesn’t necessarily like jail, talks about it in a way that isn’t spiteful. He sees it as a pit stop he had to make at that time in his life.

We were drunk and I was looking at him, kind of in love with the idea of him. Why do I hang out with people like that, why do I push myself to the other side? What could I possibly be looking for? Why do I need someone like Brian every now and then? Why do I need to get drunk with him, holding onto the edges of the city as we stumble down the road like a bunch of bums? What is it that’s missing in me? I suppose we all have an undying interest in the “other,” whatever the “other” might be, whether it’s dark or light, up or down, right or wrong. I can’t quite figure out why I drift so far away from time to time. I think I write these letters to excuse my dark detours, to write off the experiences as research for my words. But there’s some deeper reason in me that I have yet to uncover. I think it’s the very thing that has kept me from leading a perfect life.

We were wrestling each other — Brian and I — not physically, just pushing ideas on each other as we walked from bar to bar. It was Sunday and the streets in Iowa City were empty, the bar fronts quiet. The college kids had retreated into the libraries with books they hadn’t read and papers they had only thought about writing. The weekend had left them emptier than they could have possibly imagined. They ordered pizzas and sandwiches but their eyes couldn’t focus on the words. They had become murky or absent. We were the real drunks I suppose. The bars didn’t want to be open, and surely some of them were closed, but some of them had to be open because Sunday is the day when we choose not to rest but to continue chasing unfortunate outcomes and evading harsh truths. We left the bars and bought a case of beer and a forty. The forty got tossed in the air and came smashing down to the ground. It probably woke the whole neighborhood and that gave us great pleasure. Somewhere in the midst of this idiocy, I fell on the ground, always falling, and banged my knee. It didn’t shatter like the forty: just scraped and ugly. We pushed on. In my apartment we were loud and we spilled things. We looked around for inspiration. We burst into my room and looked at my 8-track record player. It was a record player that also had an 8-track inside of it. It must have been a plaything of the rich when it came out in the 1970s. Now it is merely forgotten, a curious freak-show antique in a poor man’s room. We plunged one of my few 8-track cassettes into the wide mouth of the player. It was like an old gaming system which sits there with its mouth open, innocent until a young child shoves a game — Tecmo Bowl, Super Mario Bros — into its jaws. I had bought the 8-track record player instead of a plain old record player for these very moments of surprise, bringing a friend home and watching them stare with wonderment at a sunken treasure from a past era. I remember the girl I met in a restaurant one night. I brought her back to my place and lured her from the couch into my bedroom with stories of the 8-track. She was so young that the term “8-track” wasn’t even an anachronism. For her, it simply didn’t exist. This was troubling information for me. I didn’t feel bad for her but rather for myself. I should be finding women who are my age. I should be acting my age. I laid her down on the bed and then put a cartridge into the mouth of the 8-track, an old Grateful Dead album, Skull & Roses. Then I descended upon her. She didn’t care about the nostalgia. As our jeans came off, the 8-track ate through the Skull & Roses cassette. It hissed viciously and spat out the tape. I could have killed it — the murderer — it killed my Dead album, it killed me. I’m always going limp just when I think I’ve made it. She was nineteen. We passed out.

Brian and I listened to a Patti Smith album called Radio Ethiopia on the 8-track. I didn’t care for it too much but it did seem like an artifact, more so than a compact disc of the same album would have been considered an artifact — yet even those once shiny and modern compact discs are at risk for extinction. We were sitting there listening to Patti Smith and all I could think of was that infamous jab Lou Reed once lobbed at Smith on his live Take No Prisoners album: “Fuck Radio Ethiopia / This is Radio Brooklyn.” That was in 1978, Reed on his last legs of decadence, a drunk, a speed-freak, an aging punk. A few years later he would re-emerge sober with a wife. Back in the mid-‘70s he had dated a transvestite. He had effectively discontinued an old model of himself, preferring literary elder statesman to burned-out punk. Brian and I talked of Lou Reed for a bit then we covered ourselves in blankets to keep out the cold.

When I woke it was hell and the sun was out. I discovered I had lost several important items from the night before: a book I hadn’t finished reading, a man purse, and an iPod I purchased on eBay. There was a smell in the apartment of wet cats and hamster shit though we were the only animals. The air sagged with the sweaty film of dirty men who have thrown up their last hopes in an effort to reclaim the fractured pieces of dissipated youth.

We went out to the Mill to eat cheeseburgers and Brian read my copy of James Baldwin’s Notes of a Native Son over his lunch. He honed in on a particular essay, “Equal in Paris,” about Baldwin’s experience of going to jail in France. Naturally, Brian talked about his own jail experience in Iowa City. I asked him, Who else was in jail, a bunch of fraternity drunks? He just looked at me, as plainly as he could and said, No man, it was just black people, and that was the saddest thing I had ever heard: deep in the core of a white college town and all of the people in jail were still a bunch of beat-up black people. He said they called him “Glasses” because of his thick-framed spectacles. They made fun of him but never roughed him up. He saw a couple of guys beat the crap out of each other and he said the food was terrible. He had been to jail in Cedar Rapids too and he said that was a real place to get your ass kicked but the food had been much better, almost good.

I came home. My knee hurt and I could see then that it was really torn up. I looked at the wound. It was bright, a loud reddish color like a stop sign. My apartment laid soaked in beer and trash. I hated myself for being so drunk and broken up. I wanted to get that feeling out of me as soon as I could but I had been there before and I knew it would take at least a week to feel normal again. And that’s the problem with Sunday nights and drinking: it throws the whole week into disarray, makes it impossible to reset or start over. I wish the bar hadn’t been selling good whisky for three dollars or smiling at me as I slid further from coherence or self-respect. What were they thinking: Don’t they know I have a problem? Just then, half-asleep on my couch with my insides hurting all over, I thought of you and I knew that I liked you and that you might be some sort of light I could follow on my way out of the cave. I went over to the 8-Track and put on Patti Smith. I didn’t like the album much, but given my fragile, beat-up, fake-artist’s state of mind, it just seemed like the only thing I could do.