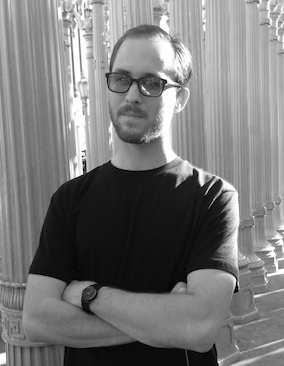 In one version of the story the right is wronged,
a man lifts his head and looks because he is a soldier,
because there is nothing left but to look at the missing parts,
the small migrations of uncertainties, the pucker, pull, and slice
of a wrongdoing doing wrong again,—it is the again, always
the again—plunged like a homesick dog into a sudden rain.
Where does the learning wrinkle? When does the braid
of future’s end fall? Where? Put your ear to the line, David says.
And I think of railroad ties, of the girls who fell asleep
in late July, drunk, and whose bodies were found
100 yards west, jagged lumps in the ice plant.
In another version, another man is cursed at by a voice
in a gray light behind a door. So he comes in through the window,
breaks something small and porcelain, weeps
over something she could never understand.
Everything is never enough, the girl whispers.
She gives him a quick blowjob just before sunrise
and afterward, as the morning thaws, the last specks of light
dissolving out the window, she cleans him up, brushes her teeth,
tells him he is welcome to stay for a few more hours, and leaves.

The buzz of a single mosquito wakes me,
taking some blood with her as she goes.
Then the smell of singed dust as the bulb over the desk
creeps from warm to hot. The fragrance of disuse.
The sound of traffic out the window has withdrawn
into to the kind of silence night pays its mortgage on.

Sean Beld’s poetry has appeared in such publications as The Cold Mountain Review, The Notre Dame Review, Hartskill Review, The Whole Beast Rag, Metonym, and The Lifted Brow. He is also the recipient of the Joyce Carol Oates Commencement Prize in Poetry. He currently lives in Costa Mesa, CA where he teaches at Orange Coast College.