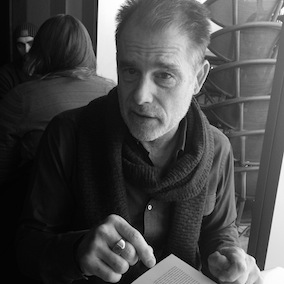 Vernix-spangled, his face beef-pink,
Like Perseus fated to slay
His nemesis without meeting
Her mortal gaze, like Orpheus
Forbidden to look back until
He’d brought forth from the underworld
The one so loved the wound of loss
Never healed, but kept on bleeding,
The newborn lets the uterus
Manhandle him, shape him the way
A god makes a man out of spit,
Mud, a borrowed rib, and wattle,
An extrusion always bloodied,
Always concluding in a streaked
Blue cord and the fat-starred applause
Of the placenta, still feebly
Breathing for him—it’s all him, he’s
The one, I thought, though his blue eyes
Can’t see, for whom Gustave painted
His dark L’Origine du Monde. But
I didn’t know yet it was cut
From a reclining, full-length nude,
An odalisque, a wanker’s aid,
A patron’s painting, made for cash
And not the sort of thing that bears
Much looking (to see, one must have
Both hands free)–I didn’t know yet
That l’origine of L’Origine
Du Monde was as miraculous
And banal as my own–that no
Man-god, no blind-sighted hero
Finds invisible truth on small,
White rectangles. So, art history
Diminishes the mystery
Of genius and deep mastery,
Leaving in its place a small frame,
A pair of scissors, and a name
So clever that it could not be
Resisted, even by Courbet,
Who retains a kind of hero’s
Glamor, even at this distance,
Even in this world, where even
I am a kind of hero, to me.

Daniel Bosch’s book Crucible was published by Other Press in 2002. His poems have been published in journals such as Poetry, Slate, The Times Literary Supplement, Agni, Berfrois, The New Republic, The Huffington Post, and The Paris Review. In 1998, Daniel was awarded the Boston Review Poetry Prize.