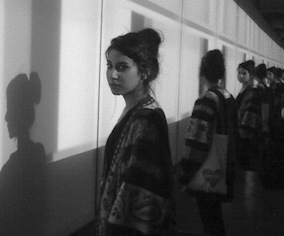 I try the needle on my neck,
my carotid hits more bpm than yesterday

My feet dangle from the bath tub’s edge,
water and oil diffusing in billows
until everything is transparent green lacquer
incising my airways from the inside

I reminisce the nakedness of your lips,
plum matte cotton beds
speaking of how
honey is the only food that doesn’t waste:
three thousand years of edibility

Sri Lankan people were screaming at me
whenever I looked through your eyes,
their little mouths babbling about telepathy
and the expansion of the human mind

Now, your Tamil terrorists still swim in my bath tub
and everything smells like eucalyptus

If you still kissed me,
I would show you
how beautiful the malachite water drips
off my slick and milky knee
while I eventually,
synchronically
shoot some warm honey up my veins

I’d show you to feel it, too.
How it unfurls,
with a thousand colourless petals
popping in my chest

resolving to become silence, and
three and a half hours of ecstasy. Aria Aber (b.1991) is a German-Afghani writer who is based in London, UK and Münster, Germany. Her work has appeared in ‘Smiths’ and ‘Industry of Fools’, as well as other German zines. Currently, she studies English Literature at Goldsmiths, University of London.

Aria Aber is a German-Afghani writer. She reads English at Goldsmiths, University of London. Her work appeared in 'Smiths' and 'Industry of Fools'.