My father saw a traveler’s feet. He told me they were knotted, two tree roots where some strange bird had carved its urges. He preferred smoothness, a grooveless music in his lips when he whistled. That Christmas I received some maps because I asked to see the world. My father helped to hang one up but pulled too hard to make it straight. My fault he said, and labeled it as such with tape.

I fussed for months to make it mine, the waxen sheen catching light; the maker’s mark a smiting blow. Orbiting the TV room with sixty-thousand miles of veins, he failed to whistle with the tune of Andy Griffith’s show. 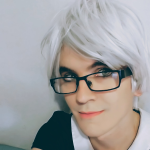