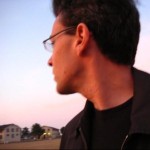 Ben Loory is the author of two collections: Stories for Nighttime and Some for the Day and Tales of Falling and Flying, as well as a picture book for children, The Baseball Player and the Walrus. His fables and tales have appeared in The New Yorker, Tin House, READ Magazine, and Fairy Tale Review, been heard on This American Life and Selected Shorts, and performed live at WordTheatre in Los Angeles and London. Loory is a graduate of Harvard University and holds an MFA in Screenwriting from the American Film Institute. He lives in Los Angeles, where he is an Instructor for the UCLA Extension Writers’ Program.

8 Replies to “On the Way Down: A Story for Ray Bradbury”