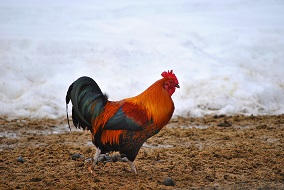 In Cold Mountain, the Civil War novel by Charles Frazier, cosmopolitan Ada Monroe hesitates when a mountain girl named Ruby Thewes offers to help Ada run her newly- inherited farm. But then a black and gold rooster, who terrorizes Ada and the farm, struts onto the porch.

When Ada asks how they might chase the creature away, Ruby wordlessly sweeps the bird into her arms and wrings its neck. In fact, she takes the rooster’s head clean off.  He’ll be stringy, so we’d best stew him awhile, Ruby says.

That scene has stayed with me since I read Cold Mountain more than fifteen years ago. At the time, I’d never encountered a rooster, and I assumed the bird’s nasty behavior in the book was an aberration, another piece of Ada’s hard luck.

But it happens that in the last several years I’ve had bad experiences with roosters. One, a rainbow-plumed creature owned by my mother-in-law, liked to attack my rear end with his spurs when my back was turned. Another rooster, large and red and owned by distant relatives, menaced visitors to what he deemed ‘his yard.

Then, a few weeks ago, while I was waiting for a flight in the Seattle airport, my husband at home in Pennsylvania sent me a text: One of the chickens crows.

This was not supposed to happen.

Four months earlier, we’d purchased seven new chicks to supplement our geriatric flock of laying hens. The newcomers, three-day-old fluff balls, had been sorted by sex before they were shipped to our local feed store. Because in the past I’ve always gotten hens when I’ve been told I’m buying hens, I assumed I would not, in several months’ time, own a rooster. After all, I didn’t need a rooster, and neither did my hens. Eggs come along regardless of fertilization.

And even if somewhere there exists a rooster whose disposition toward people is kind, or at least benign, any rooster will oppress the hens in his flock. It is not a pleasant experience to observe a rooster satisfying his biological urges. So, when I started keeping chickens, I swore that my hens, who each squeeze an egg a day through a narrow canal, would not also suffer harassment by a cock.

So when I read my husband’s message about the crowing, I was dismayed. My first impulse was to rid myself of the rooster, a bird who, when we thought the rooster was a hen, my oldest daughter adored and named Archer. She would be furious about losing the bird, and a ten-year-old’s fury over her beloved chickens is not something you or I want to behold.

Now, I did not want to end the rooster’s life. It was not his fault he was a hormonal teenager who would turn into a brooding and aggressive male. But it was my fault that I was such a wimp. I didn’t want his violence, and I didn’t want my own. And so I fretted: Who can I give him to? Who wants a rooster? Who will take this problem off my hands so I don’t have to deal with it?

The answer was no one. Anyone who knows chickens never takes an outside bird into a flock: an outside bird can carry pestilence, not to mention certain disruption of the pecking order.

I realized that if I wanted Archer gone we’d have to kill another bird.

Just before I’d left for Seattle, my husband and I had given the coup de grace to a three-year-old hen that had stopped laying eleven months earlier.  We had kept her and her sisters – now all older, unproductive birds – under the auspices of their right to a dignified retirement. But there can be a problem when a hen stops laying. The inner system that regulates a hen’s excretory and egg processes sometimes breaks down, and the breakdown can lead to a fungal infection, which in turn causes a hen to have a rather messy bottom. So messy that I have spent several Saturday mornings soaking our afflicted and irritated hens in warm water, then washing their vents and nether feathers with iodine. Afterwards, with gloved hands, I apply athlete’s foot ointment. Then the drippy chicken waddles off, quite put out by her trip to the spa. Most of the time, we catch the mess early, and the hen gets better.

We’d tried to cure Corny, my youngest daughter’s favorite, for a few weeks, but the infection wouldn’t clear. Instead, it got worse. I’m not someone to call the vet about a chicken, as home remedies, which abound in books and online, usually work. When they don’t, well, there’s an unpleasant task.

I kept hoping that Corny would rally, that her oozy and swollen hind end would go back to normal. But just before I left for Seattle, when I soaked her in warm water again, maggots rose to the bucket’s surface. I hoped there were only a few, and that they’d drown in the water or die from the iodine. But more and more came to the surface, and when I pulled the bird out of the bath, her bloated bum teemed with white larvae beneath her skin, on her skin, going in and out of her skin. Oh horror, how had this happened? How had it gotten to the point of maggot infiltration?

The answers didn’t matter, though, because we were to the point of consequences, the kind I never want to face because they are hard, because my daughters usually cry and are angry with me, because my husband will have to dig a hole and get out the gun. This – the gun – might surprise you, if you know something about slaughtering chickens. It is usually done with a knife. But my husband and I are novices and ninnies when it comes to killing. First, we are not people who have raised chickens all our lives, so we have no experience dispatching them. Two, neither of us have a hunting background. Three, one only gains experience with killing if one has practice, and it seems wasteful to kill perfectly good hens in the name of practice. Four, our problem hens are few and far between, so practice opportunities in the killing department are slim. Five, my goal in killing a hen is to end its misery, and it seems cruel to inflict more misery because I need practice with wringing a chicken’s neck or cutting its throat. I am equipped to do neither and would botch, certainly, either one if I tried.

In the airport, I tried to convince myself that killing Archer now would save us much trouble, that odds were he’d become a flogging rooster – one who would chase me and my daughters and attack our shins with his beak and spurs. I tried to convince myself that ending his life is part of who I want to be, a competent and unsentimental woman like Ruby. But life has not made me so. Life has been easy. My meat comes from a local farm or the grocery; I have never killed a creature. I have never needed to. And now that I do, I pass the job on to my husband who is more comfortable with weapons, though not with death, and so he has killed only sick hens that cannot be saved.

In the interest of a clean and efficient death, my husband aims his pellet gun at the chicken’s small brain, above its tilted yellow eye, and I hold the chicken, firmly, with both hands. He shoots. Sometimes this is twice necessary. It is all I can do to hold the hen firm and still as she completes her death throes. Sometimes, if the bird is very large, I can’t hold on and she staggers across the yard before collapsing. Sometimes, though, I can and do hold on. But always this is hardest – the body shaking and quivering as life spiders out of her muscles and nerves. Then she falls quiet in my hands, a five or six pound feather pillow, slowly cooling.