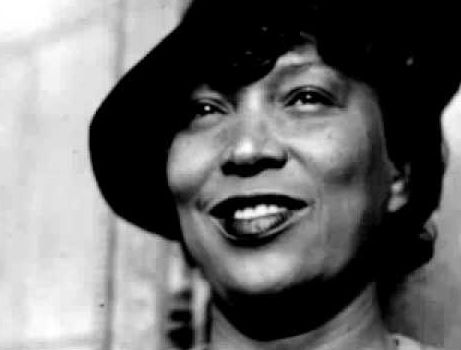 Scene—A shabby front room in a shotgun house. A door covered by dingy portieres upstage C. Small panel window in side Wall L. Plain centre table with chairs drawn up about it. Gaudy calendars on wall. Battered piano against wall R. Kerosene lamp with reflector against wall on either side of room. At rise of curtain NUNKIE is at piano playing…. Others at table with small stacks of chips before each man. TUSH HAWG is seated at table so that he faces audience. He is expertly riffing the cards … looks over his shoulder and speaks to NUNKIE.

TUSH HAWG Come on here, Nunkie—and take a hand! You’re holding up the game. You been woofin’ round here about the poker you can play—now do it!

NUNKIE
Yeah, I plays poker. I plays the piano and Gawd knows I plays the devil.
I’m Uncle Bob with a wooden leg!*[Handwritten: Last sentence crossed out
in pencil in manuscript.]

BLACK BABY Aw, you can be had! Come on and get in the game! My britches is cryin’ for your money! Come on, don’t give the healer no trouble!*[Handwritten: last sentence crossed out in pencil]

NUNKIE Soon as I play the deck I’m comin’ and take you alls money! Don’ rush me.

Ace means the first time that I met you
Duece means there was nobody there but us two
Trey means the third party—Charlie was his name
Four spot means the fourth time you tried that same old game—
Five spot means five years you played me for a clown
Six spot means six feet of earth when the deal goes down
Now I’m holding the seven spot for each day of the week
Eight means eight hours that she Sheba-ed with your Sheik—
Nine spot means nine hours that I work hard every day—
Ten spot means tenth of every month I brought you home my pay—
The Jack is three-card Charlie who played me for a goat
The Queen, that’s my pretty Mama, also trying to cut my throat—
The King stands for Sweet Papa Nunkie and he’s goin’ to wear the crown,
So be careful you all ain’t broke when the deal goes down!
(He laughs—X’es to table, bringing
piano stool for seat)

TUSH HAWG Aw now, brother, two dollars for your seat before you try to sit in this game.

NUNKIE
(Laughs sheepishly—puts money
down—TUSH HAWG pushes stack of chips
toward him. Bus.)
I didn’t put it down because I knew you all goin’ to be puttin’ it right
back in my pocket.

BECKERWOOD
Aw, Y’all go ahead and play.
(to TUSH HAWG)
Deal!
(TUSH HAWG begins to deal for draw
poker. The game gets tense. SACK
DADDY is first man at TUSH’s left—he
throws back three cards and is dealt
three more)

SACK DADDY My luck sure is rotten! My gal must be cheatin’ on me. I ain’t had a pair since John Henry had a hammer!

BLACK BABY
(Drawing three new cards)
You might be fooling the rest with the cryin’ you’re doin’ but I’m
squattin’ for you! You’re cryin’ worse than cryin’ Emma!

TOO-SWEET
(Studying his three new cards)
(Sings)
When yo’ cards gets lucky, oh Partner, you oughter be in a rollin’ game.
*[Handwritten: get you foot offa my chair etc]

AUNT DILSEY (Enters through portieres—stands and looks disapprovingly) You all oughter be ashamed of yourself, gamblin’ and carryin’ on like this!

BLACK BABY Aw, this ain’t no harm, Aunt Dilsey! You go on back to bed and git your night’s rest.

AUNT DILSEY
No harm! I know all about these no-harm sins! If you don’t stop this
card playin’, all of you all goin’ to die and go to Hell.
(Shakes warning finger—exits through
portieres—while she is talking the
men have been hiding cards out of
their hands and pulling aces out of
sleeves and vest pockets and
shoes—it is done quickly, one does
not see the other do it)

BLACK BABY I don’t like to strain with nobody but it’s goin’ to cost you five. Come on, you shag-nags! This hand I got is enough to pull a country man into town. *[Handwritten: Last sentence crossed through in pencil.]

TOO-SWEET You all act like you’re spuddin’! Bet some money! Put your money where your mouth is *[Handwritten: els my fist where yo mouf is.]

SACK DADDY
And I bet you a fat man I’ll take your money—I call you.
(Turns up his cards—he has four aces
and king)

TUSH HAWG (showing his cards) Youse a liar! I ain’t dealt you no aces. Don’t try to carry the Pam-Pam to me ’cause I’ll gently chain-gang for you!

SACK DADDY Oh yeah! I ain’t goin’ to fit no jail for you and nobody else. I’m to get me a green club and season it over your head. Then I’ll give my case to Miss Bush and let Mother Green stand my bond! I got deal them aces!

NUNKIE
That’s a lie! Both of you is lyin’! Lyin’ like the cross-ties from New
York to Key West! How can you all hold aces when I got four? Somebody is
goin’ to West hell before midnight!

BECKERWOOD Don’t you woof at Tush Hawg. If you do I’m goin’ to bust hell wide open with a man!

BLACK BABY
(Pulls out razor—Bus.)
My chop-axe tells me I got the only clean aces they is on this table!
Before I’ll leave you all rob me outa my money, I’m goin’ to die it off!

TOO-SWEET
I promised the devil one man and I’m goin’ to give him five!
(Draws gun)

TUSH HAWG
Don’t draw your bosom on me! God sent me a pistol and I’m goin’ to send
him a man!
(FIRES. Bus. for all)

AUNT DILSEY
(Enters after shooting bus. Stands.
Bus. drops to chair)
They wouldn’t lissen—
(Looks men over—Bus.)
It sure is goin’ to be a whole lot tougher in hell now!

Zora Neale Hurston  (1891 – 1960) An American folklorist, anthropologist, and author during the time of the Harlem Renaissance. Her most well-known work is her novel Their Eyes Were Watching God (1937).