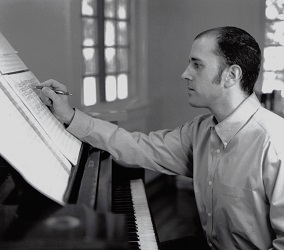 The two works offered here – “Composition with Fulcrum” and “Stereophonic” – represent an outgrowth of my interest in timbral and temporal flexibility, volatility, and the relationship between independence and cohesion. Much of my earlier work deals with simultaneous independent tempi, with a particular indebtedness to the music of Ives, Carter, and Nancarrow. In these earlier pieces, the tempo relationships remain fixed for long stretches, with little fluctuation within each temporal layer. While this stratification of pulse helped to break up the temporal grid, there remained a certain rigidity that I looked to address.

Over my next several pieces, I tried to develop more linear flexibility of tempo, and avoided the fixed, metronomic tempo relationships of my earlier music. Around this same time, my interest in flexibility and instability broadened to include the areas of pitch and timbre. A long tone or repeated chord, for example, would now be shaded by a fluctuation of tone color, similar to the approach of most electronic music composers. Additionally, I started to include more of a noise element in my music. Incorporating non-pitched sounds, and sounds that exist between pitch and noise, I began to approach a more malleable, transient music.

At this point, a commission for a solo violin work presented the particular challenge of applying these ideas to a single instrument. In the resulting piece – “Composition with Fulcrum” – the two hands of the violinist are treated as separate elements, balanced in varying configurations throughout the course of the work. The left hand dominates the opening, with a steady stream of fast notes. The right hand/arm is inconspicuous here, as the bow strokes are placed very far apart, each one encompassing 64 of these scurrying notes. Bow presence is introduced gradually to the piece, with changes occurring at increasingly shorter intervals, until the right hand catches up to the left, bowing one stroke per note.

Here (1:30 on the accompanying recording), the weight shifts towards the right hand, as the rapid left hand figuration of the opening is replaced with sedentary chords and long tones to which a wide timbral variety is applied by the bow. With an array of bow placements (near the fingerboard, near, on, and behind the bridge) and varying degrees of pressure, in addition to pizzicato (plucking with fingers) and col legno (using the wood of the bow), the colors and textures generated by the right hand form the basis of this section, offering a counterbalance to the opening left hand feature. Rhythmically, this section is free of pulse, the compressed energy of the opening released into a freer, arrhythmic atmosphere, providing space for the introduction of new sonic elements (scratching, indeterminate high pitches, harmonics, etc).

As the left hand grows more active, fragments of the opening line reappear (4:25, 5:26), now colored by the right hand’s changing bow pressure and articulations. The hands begin to reach an equal balance, often working through the opening material with new tempi, syntax, and articulation. The work closes in a state of equilibrium, the left hand darting across the strings, scanning the length of the fingerboard, with a continually shifting timbral palette.

In “Composition with Fulcrum,” the temporal and timbral design is not superimposed on the piece; rather, it is used to delineate form. Because the nature of string playing is such that the two hands have, in broad terms, different responsibilities – the left hand determining pitch and the right hand controlling the non-pitch realm – a design of this sort lends itself to the aesthetic in which I work. As the relative presence of the violinist’s hands shift and fluctuate, so do the essential materials of the work.

In the five years between “Composition with Fulcrum” and my two piano work, “Stereophonic,” I arrived at the unison as a device for timbral development. When the unison (same note or chord in all instruments) is produced by multiples of the same instrument, a subtle nuance of timbre emerges; it is as if looking at an image superimposed on itself, offset by the slightest margin. (The work of Giacinto Scelsi is particularly striking in this regard.) Further, in this piece the pianos are positioned onstage a fair distance from one another, as opposed to the typical interlocking arrangement. Thus, by overlaying similar – and in many cases, identical – material in each part, at varying time intervals, spatiality emerges as a significant factor. This spatial element, along with certain inside-the-piano effects helps to add definition and depth in this homogenous ensemble.

This homogeneity, and the opportunity it offers for complete uniformity across all parameters, suggested certain ideas to me about the relationship between the two instruments, and how the musical material in general relates to its own altered replication. At times, a single gesture begins in one piano and ends in the other – the spatial element, again, becoming a factor. The opening of the work presents several such phrases, splitting from one piano to the other, finally coalescing in the shared tremolo chords at 0:25.

In the transition from 0:42 to 1:12 a slightly different configuration is presented. Both pianos are heard continuously, each articulating a single pitch (E-flat). The alignment is flexible here, at times the E-flat sounding in both pianos simultaneously, at other times successively. Two alternating chords interject, before both players burst into ascending arpeggios. These arpeggios (fast, sweeping statements of successive pitches) represent the third main relationship between the two instruments. Both players begin these identical figures simultaneously, but as they approach the top of the figure, they each slow down at slightly different rates, allowing the gesture to pull apart from itself and begin to double.

The calm centerpiece of the composition abandons these configurations in favor of more gradual change, and exploits the ensemble’s uniformity. Here, there is an absence of figurative motive, and it is the texture itself that is manipulated. Amidst a mass of gently floating pitches, occasional staccato notes in one piano puncture the surface and begin to influence the other player’s line as the hazy texture crystallizes into an aggressive transition leading to the pedaling effects at 6:04.

These pedaling effects offer another example of motivic fragmentation and timbral transformation. After the player sharply attacks the given chord, the sustain pedal is immediately applied, catching most of the chord’s pitch content, but completely altering its timbral profile, presenting just a shadow of the original sound.

In the final two minutes of the composition, the main gestural ideas (single notes, rapid arpeggios, jagged linear figures, and the pedaling effect) begin to overlap, accumulating at an accelerated rate. This intermingling is reflected at the harmonic level, as previously segregated harmonic fields are mixed freely. In the closing bars, a sustained 5 ½ octave interval frames a brief exchange in which the players reverse the fragmentation process, bringing their chord statements into alignment on the final beat of the piece.

John Arrigo-Nelson’s music has been performed and broadcast throughout the United States and in Europe.  He holds a Ph.D. in composition from Stony Brook University, and is currently composer and guitarist with the new music collective Alia Musica Pittsburgh.