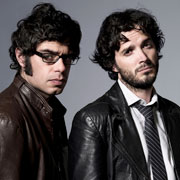 SUBSCRIBE FREE NOW for squeaky clean updates on Moon Milk Review’s new issue releases and contests. (Moon Milk Review promises to never clog your inbox with spam mail, bacon grease, or unwanted come-ons. We will never share your personal information with outside parties. We will never kiss and tell or slip roofies into your drinks. Seriously, folks. Subscribe now, and we promise to love you forever. Really.) If you’ve not seen Flight of the Conchords on HBO, written and directed by James Bobin, then you must atone. Must. New Zealanders, Bret McKenzie and Jemaine Clement, take wit, physical humor, and self-effacing ingenuity to brilliant, musical and choreographed levels that will leave you dancing to the beat even as you roll, laughing on the floor. Each episode, the Conchords get themselves into New York City trouble as they try to make it big on the music scene, love scene, and try to pay their rent scene, all with the help of “Murray” played by Rhys Darby, their well meaning, bumbling agent and fellow New Zealander.

Moon Milk Review is in love with Flight of the Conchords, the HBO series and the band. See why….

Bret and Jemaine are unlucky in both relationships and landing paying gigs. Jemaine believes he can change this long streak of bad luck by marketing his “sugalumps.”

Bret and Jemaine are having trouble making their rent and expenses so Jemaine takes to street walking.

“A Kiss Is Not a Contract”

Bret has a date with a sexy vixen who gets aggressive.

“We’re Both in Love with a Sexy Lady”

While jogging in the park, Bret and Jemaine come across a sexy lady with a lazy eye. She’s lost her epilectic dog.

“I Told You I Was Freaky”

Bret is trying to impress his date with his freak attraction.

Bret has a nightmare about “Mel” played by Kristen Schaal. Mel is the band’s biggest fan.

“Ladies of the World”

Just a little somethin’ somethin’ for the ladies. Enjoy. Flight of the Conchords is the former “New Zealand’s fourth most popular guitar-based digi-bongo acapella-rap-funk-comedy folk duo.”  The band—made up of two long time friends and comedic musicians, Bret McKenzie and Jemaine Clement—was named Best Alternative Comedy Act (2005) at the US Comedy Arts Festival and Best Newcomer at the Melbourne Comedy Festival. You can find their series Flight of the Conchords, episodes one and two, at HBO.