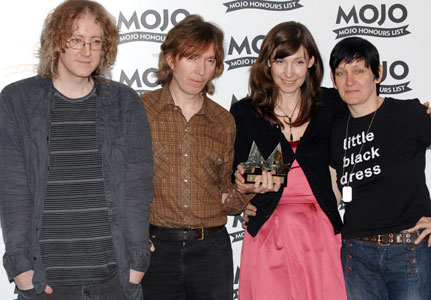 Before this review goes any further, let’s reflect: It’s February, 2013. After years of hype, rumors, heartbreak, internet hints and untimely server crashes, you just opened a review of a new My Bloody Valentine album.

Kevin Shields, the mercurial mastermind behind My Bloody Valentine had left a generation of obsessive fans holding their collective breath, wondering if any new MBV music would ever see the light of day, well the wondering is over. The way it went down is now part of the legend. The band pulled a savvy marketing technique that’s becoming more and more common: the sudden announcement. Similar to Radiohead’s In Rainbows initial suprise release, out of nowhere on  Saturday night they announced that they were dropping MBV, their first new album in almost 22 years, on their website. Millions gave up their Saturday night plans. #MBV took over twitter and eventually outdid the Superbowl hashtag. Apparently the internet is full of aging music nerds and their offspring who share the same interests and taste in music. This is a comforting thought.

However, when the album finally did appear to download, just before midnight on Saturday, the band’s redesigned website immediately and repeatedly crashed, or refused to accept payment, causing an enterprising person in Indiana to try to involve the US president himself. “The My Bloody Valentine website isn’t working and there’s a new record on it,” read a petition filed on the White House website. “We the people hereby petition the Obama administration to make it work again.”

When the website finally started uploading those magical mp3’s to everyone in the wee hours of Sunday morning, the real challenge began. Tackling the follow-up to the band’s critically beloved, impossibly unique masterpiece, 1991’s Loveless—A  landmark achievement that: cemented the shoegaze tag in the musical parlance of our times; birthed the phrase “swirling guitars” from Kevin Shields’ buzzing, sawing, shrieking, reverb-drenched, eerily tremolo-ed Fender Jazzmaster; showed young musicians how to not utilize a recording budget after nearly sending the band’s label, Creation Records, into bankruptcy; and oh yes, once stood as the band’s final—and (to many) perfect—musical statement. It would be impossible for Shields and Co. to outdo Loveless. Thankfully to their credit, MBV doesn’t try to do that. An album like Loveless is a once in a career accomplishment; MBV sounds like Kevin Shields has accepted this fact while maintaining

At the end of the day, Shields promised us a new My Bloody Valentine album, and finally, we got one. Although he might have been off by a few days (or years, depending on how you look at it), it’s incredible that a band so removed from its definitive statement has released something so true to what it set out to do. My Bloody Valentine successfully followed up a decades-old classic with MBV, an album that stands as confidently, beautifully and masterfully composed as its predecessor. And if you had any questions about it being over-hyped, remember this: Shields might not be great with dates or calendars, but a quick blast on a home stereo will prove he’s unbeatable in the studio.

MBV, track by track:  MBV  is a three part act: there’s the classic beginning which starts out with the swirling guitar fuzz and melodic beauty one would expect from a Post-Loveless My Bloody Valentine, the surprisingly surprisingly mellow and dare i say danceable interior, and the third act, a completely futuristic, alien sounding sonic head trip , most likely the drum and bass influenced  helicopter orgasm section Kevin Shields has mentioned in rare interviews.

Act I: The Classics

This begins the album off where Loveless ended. No volume could be appropriate or do it justice. Muscular without being outright industrial, it harnesses My Bloody Valentine’s natural knack for hiding melodies under so much hopeful haze. Drums here keep a pulse and do nothing more. This is a perfect beginning. Simple yet strong this is My Bloody Valentine’s legacy fulfilled.

“Only Tomorrow” continues down this path. Compared to “She Found Now” it turns up the fuzz a little bit. Yes it is large but manages to feel somewhat touchable. The drums are more prominent. Parts of the distortion feel completely satisfying like “Thank Goodness You’re Here”. Noise continues into the third track.

This is one of the best, most vicseral tracks on the album. This in person would mean an extremely physical experience. Listening to it on anything feels overwhelming. Almost industrial in nature My Bloody Valentine sounds completely foreign. Few bands could pull this sort of thing off. Machine music as run by humans would be a good way of describing it.

Act II: The Cool Down

Is This and Yes

Oh cool they threw in a Stereolab track. That was nice of them. Now this makes sense why they’d throw this in after the previous three (heavier) tracks. Yet it goes on too long to be considered an interlude. Guitars are hidden. A purely keyboard-reliant My Bloody Valentine is the result. Enjoyable but different from what they’ve done in the past.

Continuing with the lighter touch for the sweet center of the album, they at least bring the guitars back. Now the drums are more prominent too. Still the keyboard is in the background keeping track of everything. It is strange hearing the keyboard get that much attention. Still it delivers on being a mellower track with a nice Beach Boysish melody and finishes with a great psychedelic outro.

Debuted at a recent London show this track was originally known as “Rough Song”. MBV pivots on “New You” in what has to be the clearest and catchiest song they’ve ever put to tape. The general opinion seems to be that it’s one of the album’s strongest. There’s no denying that it’s immediately satisfying and totally hummable. Established and neophyte remixers will no doubt stumble over themselves to drop the first remix of the track.

Gnarled guitars begin. The amount of noise overwhelms at first. Drums are sped up. This is one of the three songs with a more drum and bass inspired rhythm. What makes this the best of the drum and bass inspired is their use of multiple patterns. Occasionally everything syncs up. Every time that happens it is fantastic. My Bloody Valentine runs wild on this one. It is the freest and most ambitious moment on the record.

Five seconds of eerie silence and then, bam!! we’re confronted with the nastiest sounding song on the album: a harsh, saw-toothed riff splutters into life mid-flow, out of nowhere, and continues in the same vein for the next three-and-a-half-minutes. “Any minute now,” you think. “Any minute now this great, stomping build is going to detonate into something entirely unexpected.” It doesn’t, and it’s all the greater for it: just a no-frills assault on the senses that ratchets up the tension without ever giving you the rush of release, and instead just actively takes the air out of the balloon of your expectations.

Kevin Shields’ crowning achievement on MBV, and the proof that MBV is still relevant is unquestionably “Wonder 2”.  The track is an amalgamation of some of the most vigorous elements in the band’s catalog – Ó Cíosóig’s crashing percussion on “What You Want”, Butcher and Shields’ twin crushing guitars on “Only Shallow”, the so-called “holocaust section” of “You Made Me Realise” – into six furious minutes of melodic cacophony. It’s a perfect ending to an album that builds in tension as it unfolds its layers slowly, and if they ever get tired of closing shows with the indescribable monolith that is “You Made Me Realise”, “wonder 2″ would handily fill that slot. While it’s not too surprising that a MBV album closes with a song that sounds like a whale crying into a reverb-drenched subway tunnel, it’s a perfect way for Shields to show that for all of the album’s time spent in development hell, he knows what elements of his signature sound to not mess with, and that m b v is truly the singular work of the Irish visionary who disappeared into his own myth in 1992. Medium Cool takes its name from the 1969 film titled Medium Cool by Haskell Wexler, notable for its cinema vérité technique and fictional/non-fictional content.

D. J. Uncle Matt was born and raised in L.A., where his mother introduced him to the Punk scene and L.A. music and arts scene. Matt studied film at the University of Oregon and in Barcelona, where he taught English and lived the expatriate life. He has written, produced, filmed and/or directed feature films, shorts, music videos, and worked as assistant camera on Sick: The Life & Death of Bob Flanagan, Supermasochist, a Sundance Film Festival, Berlin Film Festival, and L.A. Film Festival awards winning documentary. Matt lives in Washington D.C., where he is a filmmaker/screenwriter and hosts the bi-weekly radio show, Uncle Matt’s Two-Hour Shower.