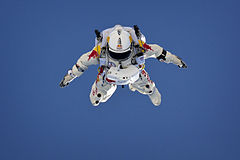 October 14, 2012 — Sixty-five years after man broke the sound barrier by airplane, Felix Baumgartner enters Earth’s stratosphere, lifted by a seventy-story balloon that looks like an inflated white trash bag. He sits in a silver capsule that is the weight of a Volkswagen Beetle for his three-hour ascent. At 128,100 feet up — 24 miles to New Mexico below -– Baumgartner gets the go ahead despite some failed electronics that are causing his visor to heat up.

“I’m going over,” he says, crawling out of the pressurized capsule and falling forward. He tumbles out of control for forty seconds before stabilizing for the remainder of his free fall. Plummeting head first at 834 miles per hour, he breaks the sound barrier: Mach 1.24. But he’s too busy trying to stay conscious to notice.

After nine minutes and nine seconds, Felix has only 5,000 feet left. His parachute deploys. Within minutes, he safely lands on his feet. He drops to his knees and throws his arms into the air. Success. After five years of training, Red Bull gives Baumgartner more than wings.

Red Bull: caffeine, the amino acid taurine, glucuronolactone (a sugar found in all sorts of foods), B vitamins, sucrose, glucose, and Alpine spring water. According to Red Bull, these ingredients combine into an amalgamation that “vitalizes body and mind.” Of course, it’s not nearly as zen a product as that slogan claims. It’s an adrenaline rush in a can, with about as much caffeine as a cup of coffee. Red Bull has been known to fuel the all-nighters of college students desperately cramming for finals, crazed gamers after the release of a new Call of Duty, and workaholics who just don’t have the time for a full night of shuteye. But science and Red Bull? That seems like an unlikely pair. It’s no surprise that Baumgartner’s mission to the edge of space, officially called Red Bull Stratos, is stirring up some controversy.

NASA kept its distance from Red Bull Stratos (perhaps because Baumgartner has denounced some of NASA’s research), and other scientists are debating what Baumgartner’s thrill-seeking will really contribute to scientific research. Red Bull hardly seems like the kind of company that would rigorously follow the scientific method, which inevitably frustrates scientists. Though there are scientific studies on the Red Bull website used to convince people that Red Bull is safe to drink, one must wonder what else is scientific about this drink and why the company decided to venture into the realm of space exploration.

The main scientific purpose of Red Bull Stratos is to advance the high-pressure space suit. But one of the main arguments in science against the mission is that twenty-four miles up, still comfortably within the stratosphere, isn’t space. A good point. While Baumgartner’s blood would have started to boil at just 65,000 feet without his suit, twenty-four miles is not nearly high enough to test space suits that could have helped the victims of the 2003 Columbia space shuttle disaster survive.

But, how high up did scientists want Baumgartner to go? We probably shouldn’t try to launch anyone into orbit (400,000 feet higher than Baumgartner took his jump), as tempting as it may be. But then NASA hasn’t done much to advance spacesuits since the ’60s. Perhaps Red Bull thought it was time to step in. Or at least to build a little science into one of their more typical thrill-seeking stunts.

The fact that science probably wasn’t Red Bull’s main driver might be what irks scientists the most. But whether the main purpose of Baumgartner’s jump was a Red Bull commercial stunt, Baumgartner’s personal search for adventure, or scientists’ attempt to improve the high-pressure space suit, when Baumgartner broke the sound barrier, eight million people watched it live, breaking Youtube’s record for the most-watched live-streamed event. Though, there was a twenty-second delay, you know, to spare eight million people from potentially witnessing Baumgartner’s brain oozing out his eyes from changes in pressure, his parachute failing, or a vomit-inducing tumble at high speeds. So maybe Red Bull Stratos is all just a marketing ploy to earn Red Bull some publicity. And a man willingly jumping out of a capsule to plummet twenty-four miles down to earth is bound to get some publicity.

Some of the four billion Red Bull cans sold each year may, indeed, find themselves in the hands of scientists poring over research papers and lab results in some manic state on the brink of a scientific discovery, but that’s likely not where most of those cans end up. When you consider the non-scientist Red Bull drinkers and the eight million people who watched the jump live on YouTube, Red Bull Stratos might just be the most brilliant commercial plan hatched to get people interested in science. Who knew a little science could beat out the Royal wedding? There might just be something to this commercial ploy/science crossover.

Sarah is a technical writer and editor for a small technology and management consulting company in Silver Spring, MD where she writes mainly about energy and materials science. She is also pursuing a Masters in Writing with a concentration in science and medical writing at Johns Hopkins University. In a world where science seems to scare people, Sarah enjoys writing about science in our everyday lives to make it more accessible to a general audience.