Everyone kept talking about that damn elevator. What’s so great about that elevator?

One day, I started listening to what people were saying about it:

I heard it has a great tall ceiling made of mirrors, and your reflection is never flawed.

I heard it goes vertical and horizontal.

Two lions guard the way. They are not mean, but they are very loud.

For one week, I watched the elevators. People were coming in and out and saying La Reflexión sent me.

This was their ticket. The Senoritas would come, usually without their husbands, running off with sneaky smiles. Maybe they have the Lotería there! they said. Then they ran into the elevators. Sometimes when the doors closed, I heard them screaming. Some of them sobbed.

Now and then a woman or man would come in very tired. Like yesterday’s lady. She was only 30 and had packed a small bag filled with photos, a crucifix, a few pairs of underwear. She also came with an avocado and sat down right at the doors. She skinned it, halved it and then ate it slowly, licking out the insides. Her skin was made from light, the kind that showed no terror — only acceptance. Si, she said, and went in, dropping the green skin to the floor. I didn’t hear her scream.

Who needs underwear where she’s going? someone said. They’re not going to let her keep that cross there.

It seemed everyone had something to say about the woman with the avocado and panties. Then when they got in, they screamed too.

Some people run in and press the buttons in a panic, as if the elevator will never come. Lit circles flash white, white, white, up, down, sideways. What is on sideways? Their eyes are wide and salty and from the front, I can see the moon pooling through the back of their heads. They are no longer human; they are only sadness. These people only come to ride it at night after La Reflexión. They crawl to the doors, beg for them to open. Most of them never get in, so they turn back to go home, defeated.

One lady, Vela, she comes after dinner, filled on tortas and horchata. Also, tequila. She brings cakes with her and puts them on the elevator. She says someone will want to eat the cake — it’s true, everyone smells it and runs in to eat it. Sometimes, she turns them on to their first cake. Only a few people say no, I don’t like it.

Vela brought her mother the other night. The poor old woman was propped up in her wheelchair, her head fallen over her shoulder. Vela straightened her up and plucked some whiskers from her face. I couldn’t help but notice how time recedes. Vela tucked a photograph of her brother — she calls him Sabatino — into her mother’s hands. Go madre, she says. She rolled her mother in with a chocolate cake, pressed a button.

The she told me all about the man in the photograph. Sabatino choked on sardine pudding at his second wedding, o Dios santo! And then Alva, his wife, she killed herself in the bathtub. She goes home with the fish in her fingers and puts the hair curler in the water, and she holds the little fish, o puta, puta, puta. She got the fish from his mouth. She wanted to love him forever. You can’t go to hell for loving someone, can you?

Every day from then on, Vela came. She came to watch the elevator, but never got in. She just brings her cake on a plate and rushes over when the doors open, sets it down on the floor and tip-toes ten feet back, squeezing her eyes shut until the elevator beeps and goes away. No sé, she says, I don’t know where it goes. Sometimes the cake is nicely made, the icing spread equally over the bun. Sometimes the cake looks like she pieced it back together, using icing as glue from the inside.

I think everyone should have some cake, she says.

Whenever she brings the cake to the elevator, everyone wants to crowd inside and eat it. It makes me think of my family. I don’t want them to be tempted by the cake. I wonder if my father would eat cake, or if he’d ever eat bony sardine pudding. I used to think of him as a man who would never eat those crazy puddings that could kill you. I used to think he would never eat cake just because someone gave it to him. He changed slowly over time. Now he says God made the ocean, and the ocean made sardines. So we should eat them, he says.

I ask him if we should eat people too.

Don’t be crazy, he yelled.From then on I found it difficult to love him.

Floor seven is all ghosts, says the new bell boy. He was only hired yesterday, but he knows all the floors by heart. Floor one, most people go to floor one, he says.

It has been a few days, and La Reflexión is still sending people to the elevators. They come in talking about their big sins, fixing their long socks and sewing their loose threads before getting in. I cried because none of them ever come back. Some of them just try to get some cake, but the doors close.

This elevator smells like madre, one woman said. And then she was gone. It must have been all the sugar, the cakes, the icing.

On the last day, when I couldn’t stand to look at the elevator any more, a girl by the name of Ojala came in with her mother. It was the day of her Quinceañera, and the day that her Grandmother gave her the bath soap she’d always wanted. It smelled of lilies and skin, she told me, like woman. She took her first real bath and there was blood between my legs. Her mother was proud but held her daughter’s hand very tightly. Their knuckles were white.

The bell-boy told Ojala that she would go to floor three. When he did, her mother came apart. Her socks rolled to her ankles, and her nostrils flared. She became very angular looking, like an old woman carved while screaming. She lay a worn creature now, her purpose lost as her child followed the scent into the elevator.

But the girl disappeared, going sideways to floor three. She would be there for a very long time, her mother knew. Maybe forever.

The bell boy only stood there with the desire to eat the cake. It was getting to him. He wanted to go in, to taste it. Was it chocolate? Was it pistachio? cinnamon? plantains? He wanted to press the button and wondered if Ojala had some.

Ojala loves cake, the mother hissed. Everyone should love cake! Mad and heartbroken, the mother rolled over and cried big glass into the floor. It was so shiny she could see herself in its reflection. Her blood was pooling. Someone would have to clean it up and get her in the elevator too.

I cried, thinking of my bathtub at home. I wanted to find out which floor I could visit if I put something electric into my lily bath.

I thought about it for a long time. I feared elevators, and something about water and electricity made me think about the beginning, not the end.

“Never as then, amid suicides, hysteria, and groups of fainting people, have I felt the sensation of real death, death without hope, death that is nothing but rottenness, for the spectacle was terrifying but devoid of greatness.” — Lorca

Lisa Marie Basile is the author of the forthcoming A Decent Voodoo, (Červená Barva Press, 2012) and a chapbook, Diorama (Wisp Press). The Poetry Society of New York will release her chapbook, Andalusia, on Brothel Books. She has been published in Pear Noir!, Word Riot, Prick of the Spindle, elimae, Foundling Review, amongst others. She is the founding editor and publisher of Patasola Press and currently reads poetry for Weave Magazine. She performs with the Poetry Brothel as Luna Liprari and is an M.F.A. candidate at The New School. 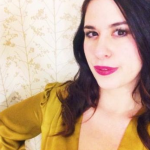