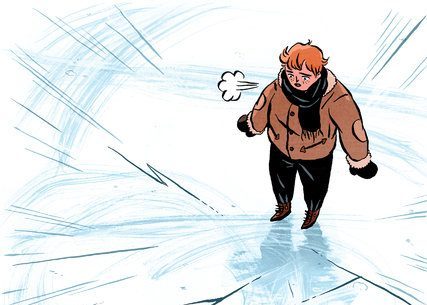 In this lesson we will focus on indirect methods of character presentation using George Saunders’ short story, “Tenth of December,” as our narrative exploration.

“Tenth of December”
by George Saunders

The pale boy with unfortunate Prince Valiant bangs and cublike mannerisms hulked to the mudroom closet and requisitioned Dad’s white coat. Then requisitioned the boots he’d spray-painted white. Painting the pellet gun white had been a no. That was a gift from Aunt Chloe. Every time she came over he had to haul it out so she could make a big stink about the woodgrain.

Today’s assignation: walk to pond, ascertain beaver dam. Likely he would be detained. By that species that lived amongst the old rock wall. They were small but, upon emerging, assumed certain proportions. And gave chase. This was just their methodology. His aplomb threw them loops. He knew that. And revelled it. He would turn, level the pellet gun, intone: Are you aware of the usage of this human implement?

Building Dramatic Tension And Conflict Between Methods Of Presentation

Consider the Following in “Tenth of December”:

The boy lives in a science fiction fantasy world. The narrator (author) describes the boy’s appearance and motivations. The reader gathers the boy’s descriptions through authorial interpretation. Then the boy sees “a man”:

Then he beheld, halfway up Lexow Hill, a man.

What kind of person leaves his coat behind on a day like this? The mental kind, that was who. This guy looked sort of mental. Like an Auschwitz dude or sad confused grandpa.

Dad had once said, Trust your mind, Rob. If it smells like shit but has writing across it that says Happy Birthday and a candle stuck down in it, what is it?

Is there icing on it? he’d said.

Dad had done that thing of squinting his eyes when an answer was not quite there yet….

The boy describes to the reader this man (interpretation by another character) and the man’s motivations. The boy assumes the man is “mental.” The reader understands the man is committing suicide, but the boy assumes the man is just a confused “grandpa.” In this moment, the conflicts between character presentations of the man build dramatic tension. The reader knows something the boy does not know and perhaps fears for the boy’s safety. Is the old man dangerous not only to himself but to others?

How does the method of presentation increase dramatic tension within the narrative? What specifically does one character assume about the other character that the reader knows is not true? How might this wrong assumption support the overall conflict and arc of the narrative?