Seventy-four bottles of yellow mustard; 58 bags of croutons; 40 cans of prepared pasta; 53 boxes of dried pasta, including 19 macaroni-and-cheese dinners; 49 bottles of hot sauce; 22 cans of chili with beans; 24 bottles of salad dressing; 26 cans each of corn and peas; 33 cans of tomato sauce; 31 cans of soup; 25 boxes of grits; 17 boxes of waffles; 13 pizzas; 20 family-size entrees; 36 bags of vegetables; and nine boxes of chicken nuggets.

On TV, savvy couponers make this kind of food haul in a single trip to the grocery store, paying in the neighborhood of $39.52, including tax, on a $793.18 bill. I spent eight long months stockpiling these items in my basement, where I carved out a food storeroom by commandeering space from my husband’s workshop and the children’s play area. According to my spreadsheet, the bill totaled $442.93 plus an additional $169.38 for long-term structural investments such as a chest freezer and a metal shelving system.

In my defense, I’m operating under some significant disadvantages.  I re-watch Extreme Couponing episodes in marathon Saturday night viewing sessions to glean every tip I can. The grocery stores around my house only double coupons up to 50 cents, not up to $1, and they limit the number of coupons that can be doubled per $10 of goods purchased. Some of them also restrict how many sale-priced items a shopper can buy in one shopping trip.

Then, too, I have to buy mostly brand-name items, limiting my use of the bargain hunter’s best friend: generics. The experts, to be blunt, are wrong. My family of gourmands can tell the difference between brand-names and generics. Oh, the stink they raised over oatmeal, of all things. I’d sourced six boxes (12 pouches to a box) of generic apple-cinnamon instant oatmeal at 97 cents each, and knowing how they felt about generics in general due to some issues with the toilet paper, I’d emptied the oatmeal pouches into a glass canister and buried the packaging in the bottom of the recycling bin.

The first two times I served the generic oatmeal, they sniffed at their bowls but ate more than half. The third time, Mason — 39 and capable of knowing better — didn’t pick up his spoon.

“What is this?” he said as he eyed his generous three-quarter-cup serving. Benjamin, 10, Bunavee, 6, and Beulah, 4, put down their spoons as well. None of them would look me in the face.

“I do love oatmeal. That’s how I can tell this isn’t it.”

“Mason, please. Everybody eat your breakfast.”

“Oatmeal has visible, distinct grains, and it’s creamy.” Mason picked up his spoon and dipped it into the bowl. He raised the spoon nose-high and upturned it. Oatmeal splattered down.

“Oatmeal is thick. Gravity wouldn’t take effect so quickly. It would stick to the spoon for a few seconds. Then it would plop down in clumps, not a torrent.”

He did another spoonful to prove the reproducibility of his observations. Mason is the science and chemistry teacher at the high school here in Newnan, Ga. He enjoys a good experiment. As scientists in training, the children studied his methods with care.

“That kind of oatmeal costs 11 cents more per serving and takes 10 minutes to cook,” I said. “We’re gaining efficiencies in cost, time, and energy use.”

“Kids, get your coats,” said Mason. “We’ll stop by McDonald’s on the way to school.”

The children raced from the table, Benjamin speculating on whether he could eat two Egg McMuffins without throwing up.

“If I see this on the table again, we’ll eat out for breakfast seven days a week. That’d blow the budget.”

“You wouldn’t.” Almost dizzy with shock.

Positivity is lacking. They’re getting surly. Three weeks ago we were at the grocery store.  We had two shopping carts filled to the brim, me pushing one and Mason the other. It was nice.

One of Benjamin’s classmates, a nasty boy named Devin, saw us. Crossing our path in tow with his mother, he said, “Hey Ben, how many brothers and sisters you got? I didn’t know you were a Duggar.” Reality TV jokes are fine, but we’d need 30 carts to achieve adequate savings with 19 children. During checkout, the register froze halfway through, and the line behind us backed up 10 shoppers deep. My family deserted me and went to the café next door for hot chocolate. Five cups (take-out for me) at $1.99 a piece.

“That’s our fun fund for the week,” I reminded Mason.

“We can get free movies from the library to balance the books.”

“For now, but the county commissioners want to close the library,” I said. “A moral obligation to stop subsidizing the poor’s entertainment habit. What’ll we do then?”

I’ve had to give away some of my best buys to the local food bank. I found a coupon at a clipping service for $1 off five cans of those little tubular sausages. I ordered six coupons at 9 cents per coupon, excluding shipping and handling charges. When a grocery store had a 10 for $10 sale, I was able to snap up 30 cans at a substantial savings. My father used to slap those sausages on saltine crackers and have a fine meal, but I know my family, so I sliced them up and mixed them in macaroni and cheese. With a bag of green salad, I had a nutritionally complete meal ready in minutes.

One bite, and Benjamin spit a mangled sausage disk into his napkin.

“What is this?” he said. Learned behaviors.

“Mason, do something,” I said.

“Ben, get the peanut butter,” he said. “Bunavee, the jelly; Beulah, bread.” The kids headed for the kitchen.

“You’re turning them into picky eaters,” I said. “This economy will tank, and we’ll have a house  of picky eaters.”

Two months ago, my boss said he’d have to put me on part-time if sales didn’t pick up soon. I keep waiting to find the right time to tell Mason. “You’re serving us meat paste. God knows what’s in this.” Mason pressed a sausage disk with his fork, and we watched the paste ooze up between the tines.

It’s not like I fried up rectangles of liver mush. They hate liver.  The sausages at least are unobtrusive. No definitive meat flavors identifiable. More than likely, the sausages contain a blend of choice-cut trimmings along with offal, and offal is much prized these days by true gourmands. Superchef Mario Batali’s New York City restaurant Babbo serves a lamb’s brain ravioli starter for $19 a plate and fennel-dusted sweetbreads as a $29 main course. (I’ve read the menu online.) I got the same thing, practically. Mason and the children swore never to touch the sausages again. 28 cans to the food bank.

Mason says we’ll list the mustard in our will, assets to be distributed.

So I mix mustard with baking soda, a cleaning paste. It works well on porcelain and stainless steel. As long as I follow with a peppermint spritz (22 drops of peppermint essential oil per four cups of water), no complaints about funky smells in the bathroom or kitchen. When the children come down with colds, I mix mustard and mentholatum to make chest plasters. I ring potted plants with mustard and cayenne pepper to fight bug infestations. Yellow-and-white tie-dyed shirts for each family member.

“Are you going to let that neon slime drive us into divorce court?” Mason says.

He kisses me to lessen the sting and I gather the children around the picnic table in the backyard, where we make mustard paintings on construction paper. A little hairspray to set it.

Caralyn Davis’ fiction has appeared in Monkeybicycle, The Drum, Side B Literary Magazine (2011 Dual Publication Award winner), and Relief Journal. She has spent more than 15 years as a healthcare journalist, writing for such organizations as the American Association of Nurse Assessment Coordination. Also, she really loves orange marmalade. 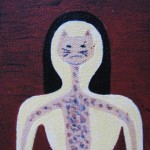