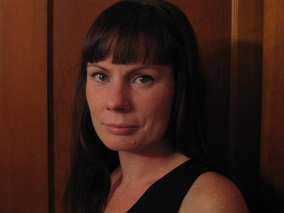 Why write a collection of literary essays centered on trees? In Angela Pelster’s debut collection of essays, Limber, she presents fascinating stories that are, in various ways, about trees. But more importantly, Limber is about how people from many different generations and time periods relate to one another through both nature and society. And along with that, Pelster’s prose is simply delicious. In this interview, Pelster discusses her process of researching and writing about trees, discovering just how strange the world is, where myth and truth bleed into one another and how the unpredictability of the world is both unnerving and gorgeous. Limber was released by Sarabande Books in April 2014.

And be sure to check out The Doctor TJ Eckleburg Review’s book club this week featuring Limber.

Q: What attracted you to writing a collection of essays centered around trees? How did the idea come about?

Angela Pelster: Originally I had planned on writing a collection of essays about some founding saints of Eastern Canada, but as I was researching that, I stumbled onto a list of famous trees on Wikipedia. It was fascinating. There are so many strange, ugly, heartbreaking, inspiring and terrifying stories about trees that I started to wonder why. Trees, more than any other living thing, have been claimed for both sacred and common purposes, and that interests me.

Q: What sort of research did you do for these essays? And if there wasn’t much research, what were some of the main aspects of your life (family, pictures, past writing, etc) you drew upon in order to write the collection?

AP: There was a lot of research! Sometimes I thought my brain was going to drip out of my ears if I had to read one more thing about trees. Most of it was historical and scientific information from newspapers, environmental articles, websites, libraries – the regular kind of research. But I always started from a place of curiosity. I’d bump into a weird article about a guy with a tree growing in his lung, or my family would tell me the awful story about a boy stabbed in the eye with a branch while playing hockey, and then I would go from there. I went on a trip to see the Burmis tree in Alberta, and some other trips for essays that didn’t make the cut for the book. I’m sure I still got some things wrong, it’s inevitable, but I tried very hard to do the information justice. That’s the trick with writing essays sometimes – it takes a long time to figure out how much research is enough, when you can stop reading, when you need to start writing. Q: Some of the essays in Limber read as stories of other people. How do you approach nonfiction when the narrator is not a central “I.”

AP: By not worrying if I should call it nonfiction! I think the terms fiction and nonfiction are sometimes helpful, but mostly problematic. The more you research any kind of “facts” you begin to see that pretty quickly. The essay called “Inheritance”about The Tree That Owned Itself in Georgia is an excellent example of this. Not only are the records incredibly contradictory, there is the possibility that the original story never existed at all, and the fact that the story is based around a tree that used to grow where the “son” of that tree now grows. It’s not even the original tree. What is important is the story itself, and what the story is saying about the people who tell it – what they want to be true and how they want to see the world. I’m interested in how people try to make sense of life.

Q: This collection brings up many issues about truth and myth. How do you think those two concepts engage with each other in your writing?

AP: The best thing about writing is that you don’t, or, you shouldn’t, understand how things are working together as you go, so as I thought through the ideas of myth and fact while writing Limber, I was trying to figure that out myself. There is a power in fact that can’t be denied. That a piece of tree was discovered in a young man’s lung in Russia is incredible, in large part, because it actually happened. The world is strange. It unnerves us with its unpredictability sometimes. But what I am most interested in is the meeting between myth and fact. What happens when you squish those two things together, or, what is that in-between world that exists where the terms fact and fiction are inadequate, places like faith and love? You don’t have to look very hard to see where absolute certainties about the unknowable lead people to do all sorts of horrible things to one another. That’s not to say I don’t want to know everything I possibly can, it’s just that sometimes it’s easier to talk about these things without worrying about false ideas of fact and fiction and the categorization of them.

Q: In her introduction to Trespasses, a memoir consisting of vignettes, Lacy Johnson writes that as she interviewed her family members, she saw how at certain points “the facts got in the way of the truth.” Did you experience anything similar to this as you were writing your collection?

AP: I understand what she means by that and I can see how it might happen, but that wasn’t my experience. There wasn’t a truth I needed to tell in Limber, so there was nothing to get in the way of anything. It was about discovering things as I went along, which is part of my writing process – if I think I know how an essay is going to develop and end before I get to that part, I get bored and don’t want to write anymore. I always have to force myself not to look too far ahead of where I am.

Q: What are a few recommendations you have for books that explore truth and myth, or books that you think are great examples of what a personal essay can be.

Gertrude Stein – The Autobiography of Alice B. Toklas

David Wojnarowicz – Close to the Knives

Q: What are you working on now?

AP: This year I got married, moved to a new city, started a new job at a new university and my first collection of essays came out, so I gave myself permission to go easy on any writing expectations and to follow my curiosity wherever it might go. It seems to have landed on a weird meditation on the city of Baltimore, its history, its poverty and beauty, its writers, artists and a twelfth century mystic named Hidegard of Bingen. We’ll see what comes of it!

Angela Pelster-Wiebe received her B.Ed. from the University of Alberta and her M.F.A. from the Nonfiction Writing Program at the University of Iowa. Her children’s novel The Curious Adventures of India Sophia (River Books, 2005) won the Golden Eagle Children’s Choice award, and Limber (Sarabande Books), her collection of essays about trees, is forthcoming in April, 2014. She has also published essays with Hotel Amerika, Granta, Seneca Review, Fourth Genre and The Gettysburg Review amongst others. She was an Iowa Arts fellow from 2009-2011, and now teaches Creative Nonfiction Writing at Towson University in Baltimore.