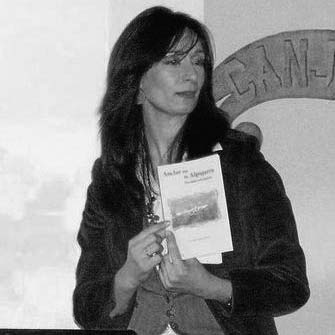 by Maria Garcia Velasco
Translated by Ian Watson
Read the story in its original Spanish.

Fireworks, flutes of champagne, fleeting kisses brushing sickly sweet perfume on both sides of my cheeks. Cleavages, pearls, suits by Armani and Dior or some new stylist with a jawbreaking name who was lately the buzz of New York. Everyone was resolutely cool. Slick-haired guys in formal gear talking into mobiles so small their hands almost hid them; and what a show of Ipods, Iphones and all the other ‘I’s and gadgets imaginable without which naturally life’s impossible today. On some website I’d read that today’s male deploys a load of high tech to massage a sexual insecurity. If so, this room hosted impotent machos, a masquerade of gleaming smiles and sunbed tans.

I left the hotel terrace for the big salon, as did many of the guests. The furnishings indoors were way over the top in de luxe, quite overbearing. Forget about simple lines, natural elegance. Here size and expense ruled. Everything was too big, too extravagant.

The walls caught my attention. A brocaded fabric with filigree gold borders. I checked the workmanship from close up, rubbed my hand over what had seemed luxuriously decorated silk but was no more than wallpaper. A neat imitation of fabric but paper first and last. This disconcerted me, led me to examine the wall more closely, discreetly. I moved toward the corner, unnoticed amidst the bustle of guests. I knew nobody specially well. And there, voilà, an edge of the paper had lifted, too lightly glued to the wall.

I smiled. To find evidence of imperfection (and falsehood) in this pretentious, swanky venue gave me some small delight. I wanted to know what the underlying colour was, the wallpaper’s secret. Delicately, I lifted that incriminating edge.

Something touched my fingertips, a curious tickle ran up my nails. Then I saw it! Black, shiny, hurrying over my hand to escape while I was numb struck. A horrid, nauseating little cockroach.

Cockroaches had always scared me senseless. I froze, concussed.

I don’t know what made me do the unthinkable. I carefully lifted a larger area of the false veneer. And there they were. Hundreds. Thousands of them. Crowding the tiny chinks between paper and wall. They seethed in a dark shiny living layer. A hidden underworld which seemed to function, nevertheless, as the essential foundation for this flimsy paper display.

My curiosity had let the cockroaches out. Now they explored the carpet in different directions; one crawled up the shoe of a regal man in a tux. I didn’t care to imagine the consequences. Someone would surely shriek soon, an alarm. The man glanced down, broke off his conversation. I shut my eyes. Here it is, here comes disaster!

But the gent went on talking while he smilingly toasted his acquaintance, raised the heel of his shoe just a little. One small swivel, minutely calculated. A very subtle manoeuvre. And a quick crack beneath his shoes, drowned by the hubbub in the room.  Both gents headed off chatting animatedly, to a different part of the room. The tips of their shoes, poking out from sharply ironed trousers, shone like black cockroaches.

I tracked down another escapee that had crawled onto a table, hidden amongst cocktails and canapés. A lady nearby floated a finely manicured hand over delicacies or another drink. She settled on the drink. Here we go. She’ll squeal the moment she sees it. But the lady seemed to notice nothing untoward and carried on talking to another guest. Only after a few moments did she set her glass down on the tablecloth, quite casually, gaze averted while she chattered.  Then she shifted the glass precisely above the insect, pressed down, squashed the cockroach flat. With a shift of a nearby plate–she had finally decided upon what to eat–the little corpse fell to the floor. That was all. The lady took the caviar canape and ate it. Black fish eggs glittered between her snowy teeth like a nest of tiny roaches.

The rest of the bold escapees met a similar fate. Little by little all disappeared due to the glasses, plates, napkins, hankies and heels of guests. This, in a seemingly inadvertent manner. Nobody grimaced nor made any queer faces nor raised voices inappropriately. Nobody lost poise, behaved shiftily, showed any discomfort. All rolled onward as if pest eradication was the most graceful and natural thing in the world.

Puzzled and thrown, I took a few minutes, rallied composure, went back to the revelatory corner, the source of the problem. It was then that I made the most important decision of my life. I resolved to fit in genuinely from then on, to be part of the social reality around me now that at last I was sensible to it. In a word, I’d be a reasonable adult now and forever, a cool head, feet firmly planted. I breathed deeply and took a stick of chewing gum from my bag, softened it up in my mouth, proceeded to seal the unstuck corner. C’est fini. Possible survivors that might still be lurking around the salon were of no further concern. Sooner or later someone would see them off. I returned to the party, downed champagne, a few double whiskies and, while polishing these off, I reflected on the complex and challenging problem of what brand of mobile I’d buy the next day, Mobile or iPhone, hmm? A crucial and momentous choice. I’d give myself some days to make up my mind, maybe a few weeks.

Luisa María García Velasco (Spain) writes short fiction and poetry. Her poems have received various awards, and some of her stories have appeared in two Best of the Year anthologies published by the Spanish SF and Fantasy Association. Apart from Spain, she has also published in Hungary, Argentina and the USA.  A story by her, translated into English by Ian Watson and published by Aberrant Dreams, became finalist for the 2009 WSFA Small Press Award.