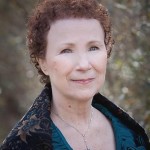 Rochelle Jewel Shapiro's novel, Miriam the Medium (Simon & Schuster) was nominated for the Harold U. Ribelow Award. Kaylee's Ghost was finalist in the Indie 2013 Awards. Shapiro's essays have appeared in NYT (Lives), Newsweek, and more. Her poems have appeared in Iowa Review, Moment, Atlanta Review. She's a phone psychic who teaches writing at UCLA Extension. rochellejewelshapiro.com