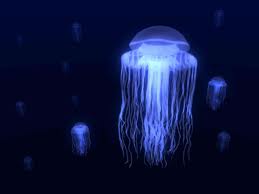 I sweep my hand through gray ocean water, dipping and bobbing in the rhythm of the waves. I dive into the curve of an incoming wave, small. Upwards, gust of breath, squinting salty eyes. The water around my eyes begins to evaporate. Clear vision reveals that the water is dominated by gelatinous mushroom caps.

I am surrounded by clear disks and gooey membranes. The next wave arches, curvy hips, revealing jellyfish blooms. They seem disconnected and chopped. When I get out of the water, my uncle tells me that they are missing their tentacles and cannot sting, but I feel tingles and prickles near my nipples like sea lice gnawing on my skin.

They may be moon jellies, Aurelia aurita, traveling from the Atlantic Ocean towards the lunar light. Their saucer-bodies swerving and contracting like sea lungs, pulled by the wind, the currents, and the moon tide. They are drifters, and over 600 million years ago, they are said to be the first animals to develop nerve and muscle cells, making them perfect candidates for traveling towards space.

Over ten years ago, NASA selected 2,700 moon jellies to board the Columbia shuttle, curious about how their nerves would react to anti-gravity conditions. The moon jelly launched off into space. The “space-age jewels” must be dead by now. They live for just one summer.

Jellyfish do not have brains. They have tissue and nerves. The tissues are ninety-five percent water and salt.

I covered my skin in baby oil, glistening and sticky. It attracted the sun, and upon our return to the suburbs of Illinois, Gillian’s mother would say to me, “You are so dark.”

Gillian and I met in Hebrew school. She seduced people with her short black hair and ballerina legs. She obsessed about plucking her eyebrows in a magnified mirror and sneaking out at night to meet with boys and men.

Gillian and I left the beach house, this one much more luxurious than the last. Last year, I came to the Outerbanks with only my family and no friend. We stayed in a house with no air conditioning and no windows in the second floor bedrooms. Cobwebs decorated the winding porch. My mom said it had character and wanted to stay there again, but the house was condemned by the Outerbanks patrol due to unsafe conditions.

One night, we returned to the beach to meet with the young men with whom we had flirted under the heat of the afternoon sun. It is said that you can really see the colors of the male jellyfishes’ gonads during the summer season. They turn from purple into pink.

It was August and the moon lingered, orange. Gillian and I sat around a circle in the dark sand. Before we met up with the men, we made a pact to drink but only if they had wine coolers.

We heard a glimpse of the men’s conversation. “It would be like drinking wine coolers,” a boy-man said, expressing his disgust for the alcoholic beverage and referring to something in the conversation that we missed. They passed around a joint.

They told us about how they work in a paper factory in Virginia. One of them, a skimboarder with blond hair and tanned shoulders, had braces like me. He said he was eighteen and embarrassed to still have metal brackets. I was thirteen and said that I knew what he meant.

Sand slid up my denim shorts, the ones with the suede ties against the hips, tickling my butt crack with the itchies. I held my plastic platform shoes in my hands and walked towards the shore with Gillian and the men. I washed the sand off my gold-silver, snake print tube top in the ocean. A wave crashed down, pushing down on my fumbling fingers and pulling my top away into the tides. Standing in my grandmother’s strapless bra, beige, I searched through the water.

I heard my father calling my name. We waited until his voice was gone. Wet, we ran home through the streetlights.

Moon jelly start off asexual, the poly stage, and endure changes through several stages until reaching sexual maturity, the medusa stage, which usually occurs during the spring and summer.

One night when I was fifteen, I felt like fingers swirled in Old Bay entered my body. The body can be used like food. Boys like to split apart the skin, steaming the female’s body in the sweat of their hands. Seasoning the inner layers with the dirt from their fingers.

I was almost unconscious on vodka that night. I invited boys from school into my mother’s house, and we started drinking in the basement—my brother’s bedroom. Two of my female friends called me that night, and I didn’t pick up. One of the boys began seasoning me with his fingers, and the other boys watched.

We stayed in a new beach house this year. My mother and my father both present and both getting divorced. My uncle held a camera, aiming it at my parents. My mother posed, sitting on my father’s lap, and smiled. Click.

I had brought a new friend to the beach, Elisa. She was the child of my mother’s friend—a woman who held dinner parties in Lake Forest and entertained guests by telling stories about how she could not find her clitoris, blonde Texas hair poof.

“I can’t believe he is dating Jennifer Love Hewitt,” Elisa said while we were alone in our bedroom. “I don’t see what he sees in her.” She was obsessed with John Mayer and her mother.

She asked me if I ever thought my parents were cheating.

“Because I think my mother is,” she said. I said nothing.

My family and I all went out to a beach dive restaurant for dinner and waited in the second floor bar for a table. Through the open kitchen window, I saw the bright blonde, tanned shoulders skimboarder. “Are you Buck?” I said.

The men came over one night in a black Mustang. I took them across the street to a small deck on the beach that came with our house. We hid under it so that they could light up a joint.

My uncle followed us, blared a flashlight on us, and left.

“What the fuck was that?”

One of them asked me to go for a walk. I did. He told me that his sister was fifteen. I just listened until we reached a dark spot of sand.

I can’t remember if he unzipped his pants or if I did, but I know that I placed my mouth to his skin.

He came in less than five minutes. He got back into the Mustang and was gone in a matter of fifteen.

The Cambridge Natural History says in “China and Japan two species of Rhizostomata are used in food. The jelly-fish is preserved with a mixture of alum and salt or between the steamed leaves of some oak. To prepare the preserved food for the table it is soaked in water, cut into small pieces and flavored.”

My uncle likes to season the crabs while they are still alive. He’s called “Doc” because he’s a dental professor and makes margaritas. He stands over the pot in his crooked, metal rimmed glasses with a big man named Sleepy. Sprinkles of Old Bay.

A runaway crab was caught crossing the street, moving slowly towards the ocean.

My mother once told me that there was a couple who had a crab feast, dipping the buttery flesh into Old Bay. Afterwards, they lied down together, copulating and rubbing their hands over each other, the Old Bay seeping into the tender folds of their bodies.

Around sunset, the crabs lie across newpapered wooden tables. One summer, the one of budding breasts and the onset of puberty, Sleepy would not let me sit with the “adults,” and I was left to learn how to eat crabs by myself. Even though I was surrounded by people my age at the kids table, I felt alone. I broke open the shells, ripping apart the top and cleaning out the lungs. The meat covered in mustard fat paste, I stuck some in my mouth. Sweet and bitter like ovaries or crab eggs.

Hold the mallet tightly in one hand to break into their tiny “arms.” Shatter the shell. Suck out the meat juices, and dip each piece in Old Bay.

This is a crab feast ritual that happens every year.

Washing over thirty dishes after each meal is my ritual every year.

Courting a new friend is my ritual almost every year.

Jellyfish live for just one summer.

Bo Schwabacher received her MA in English with an emphasis in Creative Writing from Northern Arizona University. Her non-fiction essays and poems have been published in the Mascara Literary Review, Saltwater Quarterly, the Mandala Journal blog, among others.