“Her skin is like dusk on the eastern horizon.”

When I read Karintha I think about Preacher.  His hands were thick and covered in white ash like chalk over black pavement.  He would grab my wrists and as I twisted my arm around to get away the inside of his hand ground into my small arm.  I was around five with hair down my back that Aunt Denise said made me look like a China doll.  Preacher smelled like dirt and whiskey and he was so black he scared me.  He always wanted me in his lap, hobby-horse, the point of his dusty pants jutting from in between my knuckle-like knees.

When I read Karintha I think about Kevin Fields.  My mama said he got money and we stayed with him at his trailer where I had my own room with a bed in it I was too afraid to sleep in.  I played “You Know I’m Bad” on top his gut and hugged him when I was five.  At night, I snuck in between them to sleep.  And, in the night, with my mama on the other side, his fingers went in between.

When I read Karintha I think about Lonnie.  I was thirteen, I know for sure.  He was drunk…just like everyone else in the house…so drunk how could he remember what he did and I was lying anyway.  Lonnie was my cousin Tonya’s daddy.  He smiled a whole lot.  People liked him.  He came in my room that night and touched my big breast.  He told me not to tell.  I did.  Grandma said I thought I was grown.

When I read Karintha I think about Damien.  The preacher’s son.  He was a senior and had a car.  He took my virginity on his bedroom floor when I was fourteen.  I cried and asked him to take me home.  He bought me jewelry and said he loved me.  He had big teeth and a thin bony face.  I told him he made me sick.  Jamaal punched him out in the cafeteria at lunch and his feet flew up over his head.  I broke up with him and did it with Jamaal who made me cry on the bathroom floor cause I loved him so much.

“Her skin is like dusk on the eastern horizon.”

When I read Karintha I think about Leland, Poodie, Tanky, Nema, Masud, Jide, the Police Officer, that divorced guy, Pat, Kenan, Kegan, Kyle, Kwame, Kenyon, my old boss Chad, Chad’s roommate, I think about telling that one guy his thing was too small after he bought me a pair of Timbs, I begged him not to leave, I made Harry come get his shit, I think about cheating on Neil in the Bahamas, I think about that guy in Miami and walking through the streets of South Beach too drunk to know if I had said yes when I really meant no.

Tyrese L. Coleman is a M.A. candidate in the Writing Program at Johns Hopkins University. She studied English Language and Literature at the University of Maryland, College Park. This is her first published piece. 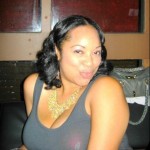 Tyrese Coleman writes fiction. She is a student in The Johns Hopkins University M. A. in Writing Program. Her work has been published in The Doctor T. J. Eckleburg Review.