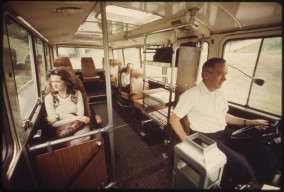 My late walk in the sub-zero black has me breathless. The freezing air is piercing my lungs with what must be thousands of microscopic, many-pronged forks, and as I walk by a lamp-lit street corner, a commuter bus looms in the distance. Though I do not know precisely where it’s going, it heads in the direction of home and I decide to jump on for the sake of a few minutes of warmth before finishing my trek home. I had not fully considered the ramifications of a late night stroll in this cloudless, starry cold. I stop and wait, the large silver front-end lowering as it brakes in anticipation of my entry. The door cranks open, an apathetic driver looking away while holding the lever as I tread the worn steps into the relative warmth of the bus. My change clinks loudly in his empty tray.

I walk a quarter-way down the abandoned isle and sit. My only company is an elderly woman who stands. As the bus accelerates, her pants seem to shift and fall far too low, as if she has recently lost an extraordinary amount of weight. She continues to stand, despite the somewhat erratic driving, the delicate skin of her knuckles crinkling as her fingers curl taut around the reflective metal railing. From the circular shape of her face, and the way her pale skin reflects the small overhead light above her, she appears as if a sad full moon. I watch as a single tear pools in the cavity of her naturally dimpled cheek, and I swear that I detect a subtle scent of raspberries in the frigid air.

Several minutes pass and she still does not sit, choosing instead to stand directly in front of the entire row of empty seats as the driver continues his mercurial turns and accelerations. Her body rocks precariously back and forth, like a toy top’s final few spins before its collapse. The creases in her brow and beside her mouth are conspicuously strained, and I watch nervously as she stands in her turbid rocking. Her eyes downcast, she seems unaware of my attentions, and from the way her paper skin curls upwards around her eyes, as if in an earnest, ubiquitous smile, I understand that she is an unusually kind soul. A shabby green-checkered flannel is wrapped tightly around her, though she wears nothing on her head or over her face. I see the raspberries now, so plump and out of place, slipping loose in her flannel’s large open pockets. The bus hurtles a little too fast over a pothole, and her body slumps slightly forward in her rocking, head drooping to her chin, and she curls one arm around her chest as if grasping and hugging and willing herself to continue inhaling startlingly visible breath after breath. She reaches her free hand towards her furrowed neck, and I notice a large gold ring, slightly tarnished, dangling from a short silver chain.

She whispers aloud a name I cannot quite hear.

I feel wind pervading the cavern of our city bus, the metallic effluvium of icy air that I normally love infusing the air she puffs. I wish I could give her my hat so that she might regain just a little color to her off-yellow skin, but I’m wearing the white fuzzy one that Eric gave to me, and it is so much more to me than just a hat. She doesn’t seem to heed the wind tunnel of this bus, nor do I expect she would. Is that erratic rocking a universal sign of loss, or is that merely a trait that she and I share?

I recall dozens of moments spent clutching and rocking, memories reverberating and echoing through miles of gaping halls beneath my insubstantial skin. As if only yesterday, my small yellow home ablaze before me as my socked feet freeze to rigid ground. Years later, my husband, coming at me again with those large raised fists, warm blood already tricking from my left ear. Years before, the casket, laid out in the back of that large black Cadillac, and I did not feel, not at all, but for the ceaseless rocking of my body. In an enduring moment seeming somehow beyond the constraints of time and past, Dad, walking out the back door, head held curiously stiff and high, small bag clutched tightly to his chest.

I sit and stare, defying my visceral yearning to reach out my mittens and grasp her old veins. I imagine them, blue and pulsing, in my wooly hands. Though her state clearly transcends words, I want to tell her that she can sit on the hard cold seat she stands before; that she can talk to me if she’d like. I have always despised the “It’s going to be okay” cliché, as things frequently aren’t, nor often will they ever be in fear and loss. Regardless, it is my instinct to tell her this: that it’s okay and she can sit with me if she’d like.

Instead I sit silent and motionless. Eyes pivoting in her direction. Silently begging her to risk a sideways glance.

The bus stops, and momentum rocks her body towards the already opening door. She walks forward, and I watch as she steps down into frozen, still air. She is directly under the streetlamp cone of light, slumped back facing me, and snow glitters around her hunched silhouette. Her face turns towards me in the tiniest of fractions, and though her left side is in darkness, her right eye just catches a glint of the orange light as she glances towards me, the slim profile of her moon face faintly nodding in my direction. Just as immediately, she turns and walks away with much more composed ardor than I might’ve believed possible, wind whipping her sparse hair as if it were a veil around her head, and she vanishes imperceptibly into the silence of night.

Heather Heckman-McKenna, a graduate of Emerson College’s BFA in Writing program and currently pursuing a Master’s at Simmons College, currently lives, works, and plays in the greater Boston area. An avid athlete, recreational kayaker and skier, and often rather spontaneous and ridiculous (if quiet and introverted) adventure and experience seeker, Heather pulls inspiration from many spaces. She finds creativity and truth-seeking via words and imagery equal measures important (like, big important) and snazzy (and sometimes a bit silly and wacky to boot), and wants to share this passion with you too. You can find more of her work at http://anazurehowl.wordpress.com and http://revealedcreative.com.

Heather Heckman-McKenna, a graduate of Emerson College’s BFA in Writing program and currently pursuing a Master’s at Simmons College, currently lives, works, and plays in the greater Boston area. An avid athlete, recreational kayaker and skier, and often rather spontaneous and ridiculous (if quiet and introverted) adventure and experience seeker, Heather pulls inspiration from many spaces. She finds creativity and truth-seeking via words and imagery equal measures important (like, big important) and snazzy (and sometimes a bit silly and wacky to boot), and wants to share this passion with you too. You can find more of her work at http://anazurehowl.wordpress.com and http://revealedcreative.com.