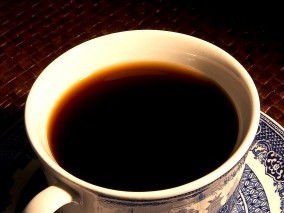 When I was a little girl, I watched my father drink many cups of coffee, usually black, in the mornings spread throughout my childhood. Before that hot sip touched his tongue, I existed as an obstacle to this beverage. But once he held the hot mug in his hands and took a swallow, he sighed, his shoulders melted slightly into his back, and a small smile appeared around his mouth. And on days when we could look out the window and see a clear blue morning sky, the small smile grew into a large one. I asked for a taste, once. He chuckled and slid the white mug over to me. The black coffee made my face contort, and only the desire to momentarily share this daily experience of his made me swallow. He said that when I grew up, I would enjoy it.

At the age of eighteen, when I began having seizures, I hadn’t yet savored a Frappuccino, a latte, a Macchiato, or any other variation of the coffee that my father drank. Four neurologists insisted I did not have epilepsy. I had something else, and no matter how many anticonvulsants I tried I continued to flop around like a fish out of water at seemingly random moments in a day. They usually lasted a few minutes, followed by a brief rest of no more than five minutes, before the convulsions started again. Sometimes this repeated for hours. And I discovered that caffeine, in the form of Coke, tea, or even the small amount found in Midol, was one of many things that set off an episode.

As time went on, I realized almost everyone around me depended on some sort of caffeine to function. This made me happy, in a way, because I did not need that to make it through the day. But still, I watched people when they prepared their cups of coffee. Each person had a different cream and sugar ratio they preferred and very rarely deviated from this mixture. Others preferred sodas or energy drinks, like Red Bull. But, overall, I noticed that children disliked coffee until they passed some magical age, an invisible line marking the end of the transition from child to adult. At times, I wondered if I’d stepped across it.

At twenty-six, I tried weed at a party. Sometimes in life I gave up, feeling that no matter what I did I wound up with the same result: seizures. At first, I only found the high interesting. Then, I got thirsty. There were, in addition to other beverages, Cokes, something I could only barely remember tasting and enjoying. And so I drank one, figuring I would at least get some kind of pleasurable experience before the twitching session started. My friends asked if I was sure, absolutely sure, and we prepared for the inevitable. But nothing happened. For the first time in over eight years, I enjoyed a Coke — caffeine! — without consequence.

I had dreamed of this, yearned, hoped, begged. And I knew the first thing I wanted to try, to see if this grass really worked. A friend of mine agreed and after I got stoned he took me to Waffle House, a breakfast diner most often found in the south and not known for their coffee but their waffles. I ordered my first cup of coffee. I poured one cream and one sugar packet into my drink. And when I sipped the steaming coffee from that mug, the liquid ambrosia exploded with nutty warmth in my mouth that filled me and took me back to those mornings in my childhood.

Around this time my father told me he didn’t drink anything with caffeine in it anymore. It made him jittery. I had missed the window to have a cup coffee with him. Even so, I have my answer. I understand why his shoulders relaxed and his sigh with that first sip. And when I sit with my hands wrapped around a warm mug, I hope one day to share a cup of coffee with him and look out the window as we smile, seeing blue over take the morning colors and spread itself across the sky.

One Reply to “Best Taste in the World”