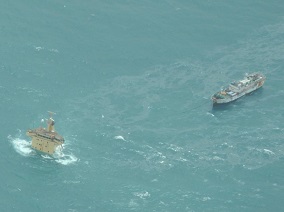 Piracy is a sinking business. It was big business for a while, worth as much as $238 million annually, and the best market for that business was the Gulf of Aden off the eastern coast of lawless Somalia. But the formation of a multi-national security force in 2009 crippled the market. Big guns atop bigger warships deterred market participants—and the gangsters and warlords who backed them financially. Hijacking attempts dropped off drastically starting in 2012. And since the start of 2013, Somali pirates haven’t pulled off a single successful hijacking.

Yet roughly 50 seafarers, some the crews of commercial ships and others private yachters, remain in captivity, beached along coasts in a sort maritime purgatory. (“Piracy,” an international crime, is restricted to the high seas, which begins at 12 nautical miles from shore; inside those 12 miles, acts we would otherwise call piracy are merely domestic crimes.) In this purgatory they wait, captives and captors alike, the falling commodities and those holdouts who hold them, listing back and forth and back again on battered ships, surviving under siege of their own squalor, battling a more acute desperation. They wait, for someone to step in and pay. They wait, and with each day, the stakes only get higher.

One illustration of this phenomenon was the hijacking of MV Albedo, a Malaysian-flagged cargo ship with a crew of 23. She was hijacked in November 2010 and held for ransom for 31 months until the negotiations ended when the ship sank with pirates and some hostages still onboard. No records from inside the ship were ever recovered, but if they had been, they might have shown a daily logbook like those kept by the watch officer on any ship, a logbook like this:

Onboard MV Albedo, off the eastern coast of Somalia

We have her. Yesterday we took her. We made our approach at night while she slept. Once she awoke, her crew fired water hoses but we maneuvered too fast. They fired flares at our skiff but they missed. They used their tools as weapons, throwing hammers, wrenches, and metal drums. But we hooked our ladder. Then they cried and begged. Then they cowered. We bound their hands and feet in the wheelhouse. All but the captain. I pushed my a-kay into his back. He spoke quickly and quietly to nobody. He drove. He beached her. Amad will negotiate from the beach and the mother ship and we will be paid. We have them secure. 23 of them. All male. Properly relieved by Nasi.

4 attempted escape this morning. They jumped from the deck. One hit the water strangely, drowned. The others swam to shore. Hanif fired at them, but we need them alive. We watched them swim. We called to Amad and reported their location. They made land, ran, collapsed. Amad’s men recovered them. 22 remain, secure. They have nowhere to go. Their countrymen have no choice. We will be paid. Amad negotiates terms.  Properly relieved by Nasi.

Captives remain in wheelhouse. One has infection in leg. It is green and brown and white. Others cough. We took pictures. Amad will use them in negotiations and we will get paid. Then we will go home. Properly relieved by Nasi.

Water provisions low. Captives weakening. Infected man afflicted by maggots. He cried in the night. We must get paid soon or the man will die. Properly relieved by Nasi.

Amad reports that payment is coming. Less than what we demanded so we will release only some. The others will stay. They need water. We need water. Properly relieved by Nasi.

We released seven captives. We pointed our rifles at their heads until they stood under their own strength. One man collapsed so we replaced him.

We kept the captain, but let him send a letter. Abdullah translated it first. “Please save us,” it said. “If you are not able to do so we will die automatically. We are malnourished, we are drinking contaminated water and don’t have anything proper to wear. Many of us are getting sick….”

Instructions are to keep them strong enough to walk, but no stronger. Provisions are low. Properly relieved by Nasi.

Amad received payment, 1.1 million U.S. dollars. He must first pay our creditors, then the police, then his staff. He must purchase fuel, provisions. Her hull is taking on water. We are sitting deeper in the water, leaning portside, to the empty sea. He must purchase supplies to make repairs, to keep us afloat. Then he will pay us. Relieved by Nasi.

Infected man died. We threw the body overboard. They complain of difficulty breathing in the wheelhouse. We enter only when necessary. Relieved by Nasi.

Two more have died. Their bodies were white. More white than I remember. No more can die. We have few provisions. Amad reports that payment will come. It must. She is sitting deeper in the water and Nasi fears she might sink soon. He relieves me.

No more provisions. We are weak. We fish for food. We trap water. We must feed captives to keep them alive. We keep them alive to get paid. They are trapped here. So are we. Relieved by Nasi.

We list badly to the port side, to the ocean side. We can no longer see the land. Only ocean. She is taking on water. We used hoses to redirect the flow overboard but it is too fast. We tried to patch the hull but the flow is too strong. We cannot stop it. God help us. The captives cannot fight the boat’s tilt. They lie on top of each other as one. Abdullah and Hanif and Nasi and the others are in the hull fighting the water. I remain with the captives, but we need relief immediately. We need relief.

She is gone. She took Abdullah, and Hanif, and Kooshin. She took Assadullah, Samir, Wardi. She took Nasi. They are dead. My friend Nasi is dead. Captives are missing. We have others, but they are near death. I grabbed the youngest, who still had strength to walk. I took the logbook. I will take it home with me. Amad has vanished. Without him, we will never get paid. I will just go home. Relieved.

Four hostages drowned with MV Albedo on July 6, 2013; Seven pirates died as well, none of their bodies recovered, all of them swallowed whole by a cruel sea. Eleven more are still missing. Still more, from other ships along other coastlines, are missing, too. But the world has moved on, on to other international stories, on to more compelling mysteries—like that of a disappearing Malaysian airliner and its 239 passengers. Many fear that they, too, were swallowed by the sea. I fear that their stories, like those of MV Albedo‘s crew, were swallowed with them, that in their place we’ll be left to speculate about them, to make up their stories for them, so that we, too, can move on.

Randy Leonard is an Afghanistan war veteran and a professor of military law. His writings have appeared in the Military Law Review, The Baltimore Sun,Stars and Stripes, Proceedings Magazine, and The Doctor T.J. Eckleburg Review. He’s at work on his first novel. He lives in Capitol Hill with his wife Hadley and their dog Lincoln, an Afghan emigre.