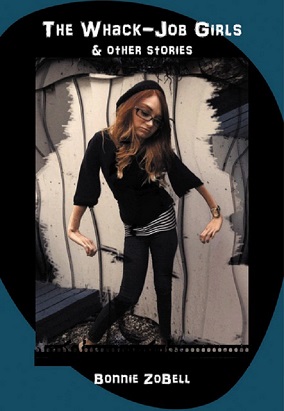 The Whack-Job Girls portrays a posse of women who either don’t quite fit in or are deeply disconnected from society. Dark humor creeps through these quirky tales as one thinks she sees the Virgin Mary on her living room wall, another losing her eyesight refuses to the end to quit her rock’n’roll parade, still another must clean mysteriously revolting mishaps as a hotel maid working graveyard. moment.  Published by Monkey Puzzle Press in March 2013.

“ZoBell is able to capture a poetic lyric in short narratives of socially and economically outcast women in her text: the maid working at an upscale hotel called upon to attend to a room at three AM, or the Midwesterner from Spokane who rides a train to Harlem when “the only black people [she] ever saw were Crips and Bloods in movies of the week.” These stories develop their characters’ personal situations . . . but there is also a layer of gothic séance, which produces a feeling one gets from a Denis Johnson or Shirley Jackson novel.” Matt Pincus, PANK

“ZoBell’s stories cut to our existence and our desires to connect with others, whether this connection be in the communal approach to bedding with animals and a sleep apnea-machine breathing husband in ‘Deep Sea Dive’ or the reduction of all the earth’s inhabitants to the violence of the animal world we all live in in ‘Serial.'” –  Brandon Shuler, Prime Number Magazine

“Bonnie ZoBell is my favorite sort of whack-job girl—a writer with a sharp eye, a sharper tongue, and a reckless heart. Read this book. Then read it again.” – Steve Almond, blurb on cover

Discussion Questions about The Whack-Job Girls

1.  How might these stories have been different if they were longer?

2.  Is there one of these characters who you relate to the most?

3.  Do you think these women are “whacky,” or are they like most people?

4.  Why do you think there are so many animals in these stories?

5.  In what way do you think these stories are related? The Tide King by Jen Michalski

This spellbinding debut novel is the winner of Black Lawrence Press’s 2012 Big Moose Prize. Magical realism is woven through the extraordinary tale that encompasses Africa and Germany during World War II, and 1800s Poland, where a small girl lives in fear of being found by the Nazis who murdered her mother for being a witch. Immortality is explored in ways you haven’t imagined.

Jen Michalski is also the author of two collections of fiction, From Here and Close Encounters, and a collection of novellas, Could You Be With Her Now. In 2013 she was named one of “50 Women to Watch” by The Baltimore Sun and won a “Best of Baltimore” for Best Writer from Baltimore Magazine. She is the founding editor of jmww and host of The Starts Here! Reading Series and the biannual Lit Show. She lives in Baltimore, MD. In this elegant yet often terrifying short-story collection published by Magic Helicopter Press, the imagination works as an escape from what the young-girl narrators need to hide from. The prose is delicate but the themes are not. A rat scratches behind the walls a father has painted and left. A man sends his daughter a friend request. A man draws a woman pictures she doesn’t want, of her hair wound around her neck. Women search for life after darkness and breath after violence. Their mother swims in quarry water the coolest, deepest green they have ever seen.

Claudia Smith’s flash fiction collection The Sky Is A Well And Other Shorts was reprinted in Rose Metal Press’s book A Peculiar Feeling of Restlessness; her second collection of flashes, Put Your Head in My Lap, is available from Future Tense Books.

In this literary tour de force of twenty-seven poems published by Cervena Barva Press in 2013, Bill Yarrow explores poetic possibilities of theme, form, tone, and style while offering a masterful and original, not to mention hilarious, course in comparative poetics.

Bill Yarrow is a Professor of English at Joliet Junior College where he teaches creative writing, Shakespeare, and film. He is the author of a volume of poems, Pointed Sentences (BlazeVOX, 2012). The Lice of Christ (MadHat Press, 2014), Incompetent Translations and Inept Haiku (Cervema Barva Press, 2014), Fourteen (Naked Mannekin, 2011), and Wrench (erbacce-press, 2009). Bonnie ZoBell’s new connected collection, What Happened Here, is centered on the site PSA Flight 182 crashed in the North Park area of San Diego in 1978. She has received an National Endowment for the Arts fellowship in fiction, the Capricorn Novel Award, and a PEN Syndicated Fiction Award. She has held resident fellowships at MacDowell, Yaddo, VCCA, and Dorland. She received an MFA from Columbia University on fellowship and currently teaches at San Diego Mesa College.