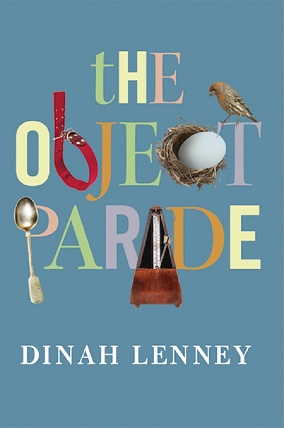 The Object Parade by Dinah Lenney

This new collection of interconnected essays marches to a provocative premise: what if one way to understand your life were to examine the objects within it? Which objects would you choose? What memories do they hold? And lined up in a row, what stories do they have to tell?

Each of the essays in The Object Parade begins with one thing — real or imaginary, lost or found, rare or ordinary, animal, vegetable, mineral, edible—every one of which sparks an opportunity for rue or reflection or confession or revelation, having to do with Dinah’s coming of age as a daughter, mother, actor, and writer: the piano that holds secrets to family history and inheritance; the gifted watches that tell so much more than time; the little black dress that carries all of youth’s longing; the purple scarf that stands in for her journey from New York to Los Angeles, across stage and screen, to pursue her acting dream.

Read together or apart, the essays project a bountiful mosaic of living and loving, of moving to Los Angeles and raising a family; of coming to terms with place, relationship, failures, and success; of dealing with up-ended notions about home and family and career and aging, too. Taken together, they add up to a pastiche of an artful and quirky life, lovingly remembered, compellingly told, wrapped up in the ties that bind the passage of time.

“A pensive perusal of the objects that can define and shape a life… the collection’s pieces build on each other, layer upon vivid layer of Lenney’s personal history, her heart firmly invested in hearth and home…One of the book’s most moving entries also happens to be its shortest: a strikingly gorgeous, two-page homage to Lenney’s daughter, portrayed as a young girl bouncing in the sun trailing a kite flush with bright streamers. An eclectic treasury of the cherished and the evocative.”

“This creatively structured book remains an enjoyable read, and the standout essays merit the price of admission.”

“Spoon, piano, flight jacket, Ferris wheel—The Object Parade courts tactile memory. Driven by Dinah Lenney’s distinctive, insouciant voice, at once engagingly authoritative and tenaciously self-questioning, the heft of a guitar, smell of chicken simmering, or ticking metronome are brought to life again, then re-examined under the magnifying glass of time. The story of family and fate (with its rich panoply of relationship and revelation) unfolds here as “one thing” does inevitably “lead to another” in the hands of an author who gives us genuine insight at its subtle, insistent best.”

—Judith Kitchen, author of Half in Shade and The Circus Train

“From politics to the piano to the lament of a mourning dove, Dinah Lenney looks life in the eye and never finds it wanting. Like Proust’s madeleines, her “objects” scent the terrain of this book with memories from the evanescent to the profound. The world itself, examined with joy, shines out through each small detail. You will love this book, one object at a time, right down to its very end.”

—Linda Gray Sexton, author of Searching for Mercy Street: My Journey Back to My Mother, Anne Sexton and Half in Love: Surviving the Legacy of Suicide

“The Object Parade is a rich, poignant homage to, quite literally, the stuff of life. Lenney is a gifted essayist, but her ear for the riddles and rhythms of language reveals the sensibilities of a poet—even a musician. She doesn’t just write to us. She sings to us. You won’t just read this collection, you will hear it.”

—Meghan Daum, author of Life Would Be Perfect If I Lived in That House

“How better to track the stages, shape, and meaning of a life than by way of the significant objects in it? But Dinah Lenney is a good deal more than clever. Every object she embraces in this beautifully-wrought book discloses the compressed and hidden power of things, the nouns with which we write our lives. Piece by piece, the author reveals herself as a first rate observer in possession of a kind and generous mind—the most treasurable object in her rich parade.”

—Roger Rosenblatt, author of Making Toast and Children of War

“The Object Parade is a wonderful book—an inquiry, a quest. The relation of objects to individuals is perhaps its secret charm. It doesn’t simply narrate —underneath is the persistent urgency to understand, to consider, beyond the joys and anguish of the self, the meaning of these bright and sometimes out-of-focus slides that pass before us, revealing not only a life but a growing consciousness. I read with deep pleasure and that sensation of being in a book, that is rarer than it should be.”

“Dinah Lenney’s marvel of a book is both unflinching and confiding. Her subjects are, ostensibly, the familiar objects of daily life. But no matter what this writer sets her sights on–a scarf, a coffee scoop, a pair of shoes–its sure to yield unexpected meanings, intricate histories, and memorable stories. The objects in this parade quickly transcend their personal significance to the writer and stir the reader with a sharpened sense of life’s pleasures and risks. Lenney knows that everything we touch has the power to change us.”

1. Consider the objects in your life: if you were to choose five things that represent who and how you are (or three, or seven, or ten), what would they be?

2. Consider the significance of those objects: Why did you choose them? What makes them valuable? Were they given to you? Did you acquire them all by yourself? Are they even yours or do they belong to somebody else?

3. What about the structure of The Object Parade? Does it feel deliberate? If you were to read the essays out of order, would they tell a different story? Would that matter?

4. If it’s true that we come to “creative nonfiction” to figure out what we think and/or what we didn’t know we knew—that is, if the genre is driven by questions—what is Lenney asking and what does she discover about herself and others?

5. Are you afraid to write about your family? Should Lenney reveal less or more about the people in her life? And does she strike you as objective and fair-minded, or she asking for trouble? Do you suspect she’s some kind of glutton for punishment?

6. Lenney was originally an actor—so who are the star players in her book? Who most interests you? Who are you most curious about? Who doesn’t get a fair shake? Dinah Lenney is the author of Bigger Than Life, published in the American Lives Series at the University of Nebraska Press, and co-authored Acting for Young Actors. Her essays and reviews have appeared in many publications and anthologies including the Los Angeles Review of Books, AGNI, Creative Nonfiction, The Harvard Review, The Los Angeles Times, The New York Times, Brevity Online, and The Rose Metal Press Field Guide to Writing Flash Nonfiction. She serves as core faculty in the Bennington Writing Seminars, the Rainier Writing Workshop, and the Master of Professional writing program at the University of Southern California. Dinah has played a wide range of roles in theater and television, on shows such as ER, Law & Order, Monk, Terminator: The Sarah Connor Chronicles, and Sons of Anarchy. She lives in Los Angeles.