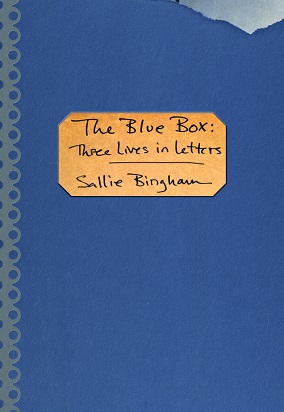 The Blue Box by Sallie Bingham

Imagine a forgotten blue box containing a snarl of letters, memoir, college bluebooks, yellowed manuscripts, and deeply creased articles—the earthly remains of three ancestors. From just such a discovery, Sallie Bingham has woven a family history centered on her great-grandmother Sallie LeFroy, grandmother Helena Caperton, and mother Mary Bingham. The narrative spans more than a century, from the Civil War through the Jazz Age; each determined woman had a penchant for the written word.  In a memoir, Sallie LeFroy puts forward a squeaky clean history for her descendants; Helena scrapes together a living writing popular stories; and we watch Mary and Barry Bingham’s romance unfold in letters—an agonizing, charming conversation that spans years until it finally results in their marriage. Fans of Sallie Bingham’s Passion and Prejudice will appreciate anew Bingham’s eye for colorful detail and dramatic family dynamics. She beautifully demonstrates an inheritance of emotion, morality, ideology, and most lasting of all, irreverence.

“The author’s family history is easy to read but not frivolous. Issues of race, privilege, and class arise, as does the ugly topic of money (or lack thereof) in this colorful snapshot of Bingham’s family. Fans of women’s history and devotees of Southern family sagas will enjoy taking this detour into nonfiction territory.”
— Library Journal

“It is her admiration for the writing of her forebears—and the link that a love of letters provides between generations—that drives this tribute. She also takes time to stress the effects of southern patriarchy on these women, and it’s interesting to see the progression out of those constraints after several long generations. Bingham also appropriately acknowledges the racial and class injustices that these privileged, white women represent or, more likely, espoused. Her mindfulness is further proof of that progress.”
— Booklist

Sallie Bingham published her first novel with Houghton Mifflin in 1961, shortly after graduating from Radcliffe College. Since then she has published four collections of short stories, four novels, the memoir Passion and Prejudice, and several plays, many of which have been produced. Bingham was Book Editor for The Courier-Journal in Louisville, Kentucky and has been a director of the National Book Critics Circle. She is the founder of The Kentucky Foundation for Women and The Sallie Bingham Archive for Women’s Papers and Culture at Duke University.