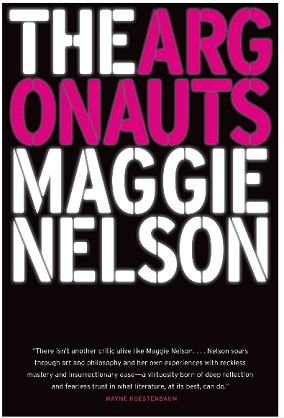 The Argonauts by Maggie Nelson

An intrepid voyage out to the frontiers of the latest thinking about love, language, and family

Maggie Nelson’s The Argonauts is a genre-bending memoir, a work of “autotheory” offering fresh, fierce, and timely thinking about desire, identity, and the limitations and possibilities of love and language. At its center is a romance: the story of the author’s relationship with the artist Harry Dodge. This story, which includes Nelson’s account of falling in love with Dodge, who is fluidly gendered, as well as her journey to and through a pregnancy, offers a firsthand account of the complexities and joys of (queer) family-making.

Writing in the spirit of public intellectuals such as Susan Sontag and Roland Barthes, Nelson binds her personal experience to a rigorous exploration of what iconic theorists have said about sexuality, gender, and the vexed institutions of marriage and child-rearing. Nelson’s insistence on radical individual freedom and the value of care-taking becomes the rallying cry of this thoughtful, unabashed, uncompromising book. Poet, scholar, and nonfiction writer Maggie Nelson earned a PhD in English literature at the Graduate Center of the City University of New York. Her work is often described as genre crossing or hybrid; she has noted her interest in poet Eileen Myles’s idea of “vernacular scholarship,” adding, “I need to talk back, or talk with, theorists and philosophers in ordinary language, to dramatize how much their ideas matter to me in my everyday life.” Nelson’s book Bluets (2009) is perhaps her most well-known work mix of scholarship and poetry. Her other collections of poetry include Something Bright, Then Holes(2007), Jane: A Murder (2005), The Latest Winter (2003), and Shiner (2001), which was a finalist for a Norma Farber First Book Award. She is the author of an account of sexual violence and the media, The Red Parts: A Memoir (2007), and a critical work on the New York School poets, Women, the New York School, and Other True Abstractions (2007), which won a Susanne M. Glassock Award for Interdisciplinary Scholarship. Her critical study of aesthetics and cruelty, The Art of Cruelty: A Reckoning (2011), was named a New York Times Notable Book of the Year.