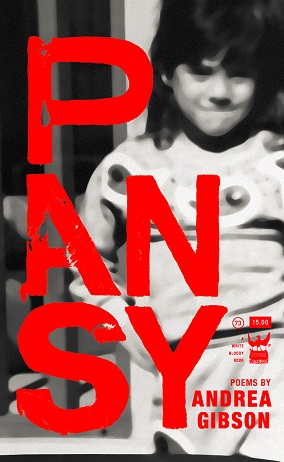 In PANSY, Gibson balances themes of love, gender, politics, sexuality, illness, family and forgiveness with stunning imagery and a fierce willingness to delve into the exploration of what it means to truly heal. Each turn of the page represents both that which as been forgotten and that which is yet to be released. While this book is a rally cry for political action, it is also a celebration of wonder and longing and love.

“Gibson is among the nation’s most admired and emulated poets. Her verse is at once personal and political, feminist and universal, filled with incinerating verbs and metaphor, and delivered with gut punching urgency.”

“Andrea Gibson is a truly American poet, or rather, she represents the America I want to live in. Her work lights a candle to lead us where we need to go.”

“ Andrea Gibson does not just show up to pluck your heart strings. She sticks around to tune them. If being floored is new to you, ya might want to grab a cushion. Whatever the opposite of fooling someone is, Andrea does that. Beware of the highway in her grace and the crowbar in her verse.”

“Andrea Gibson’s work is at once deeply haunting and profoundly inspiring. Her words cut so sharply and completely they cannot be shaken. To call her one of the best poets is a gross understatement. She is a rare artist who forever changes those who experience her poems.”

Andrea Gibson is not gentle with her truths. It is this raw fearlessness that has led her to the forefront of the spoken word movement– the first winner of the Women’s World Poetry Slam –Gibson has headlined prestigious performance venues coast to coast with powerful readings on war, class, gender, bullying, white privilege, sexuality, love, and spirituality.

Her work has been featured on the BBC, Air America, C-SPAN, Free Speech TV and in 2010 was read by a state representative in lieu of morning prayer at the Utah State Legislature.

Now, on her fifth full-length album FLOWER BOY and her second book THE MADNESS VASE, Gibson’s poems continue to be a rally cry for action and a welcome mat at the door of the heart’s most compassionate room.