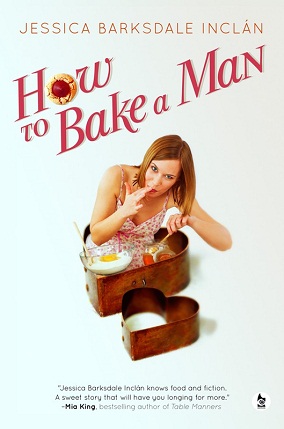 How to Bake a Man

When Becca Muchmore drops out of grad school, all she has left to fall back on is her baking. Ignoring her mother’s usual barrage of disapproval and disappointment, she decides to start a small business hand-delivering her wares. A friend introduces her to an office of hungry lawyers, who agree to give her a try. Her lizard-booted neighbor Sal is happy to help out when he can, and almost before she knows it, Becca’s Best is up and running.Before she can settle into a routine, things get complicated. The office ogress could easily be Becca’s sister and has absolutely no patience with cookies or other frivolities. Even worse, her boyfriend is the man of Becca’s dreams – kind, funny, successful, and brain-meltingly gorgeous. As the dark undercurrents threaten to pull her down, Becca swiftly finds herself neck-deep in office politics, clandestine romance, and flour. Saving her business (and finding true love) is going to take everything she’s got, and more.Packed with charm, sparkling humor, and a genuinely unforgettable cast, this delicious tale of a woman struggling to find her path might just be Jessica Barksdale Inclán’s finest novel to date.

“Jessica Barksdale Inclán knows food and fiction. A sweet story that will have you longing for more.” — Mia King, best-selling author of Table Manners and Family Room
“Part love story and [part] journey to value oneself, How to Bake a Man is a lyrical, rich story that will please readers of all stripes (and tempt your taste buds with tasty recipes).” –Jordan E. Rosenfeld, author of Forged in Grace, Night Oracle and Make a Scene

“Becca Muchmore is much more than a talented baker of scrumptious desserts she s a captivatingly real heroine who ll win your heart with both her cinnamon rolls and her search for love. How to Bake a Man is one delightful read.” –Wendy Tokunaga, author of Midori by Moonlight and His Wife and Daughters Jessica Barksdale Inclán’s debut novel Her Daughter’s Eyes, published in 2001, was the premier novel published under New American Library’s new imprint Accent. Her Daughter’s Eyes was a final nominee for the YALSA Award for the best books of 2001 and best paperbacks for 2001 and has been published in both Dutch and Spanish. Her next novel The Matter of Grace was published in May 2002. Her third, When You Go Away, came out April 1, 2003. Her fourth, One Small Thing, was published April 2004, and was translated into in Dutch and Spanish. Walking With Her Daughter, was published in April 2005, and her sixth, The Instant When Everything is Perfect in February 2006. Starting in June 2006, she published the first in a trilogy from Kensington Books, When You Believe, Reason to Believe, and Believe in Me. Her next trilogy began with Being With Him and Intimate Beings. The final book in the trilogy–The Beautiful Being–came out in October 2010. She is a 2002 recipient of the CAC Artist’s Fellowship in Literature. Inclán teaches composition, creative writing, mythology, and women’s literature at Diablo Valley College in Pleasant Hill, California, and on-line and on-land creative writing courses for UCLA extension. She has studied with Sharon Olds, Anne Lamott, Kate Braverman, Grace Paley, Marjorie Sandor, and Cristina Garcia. Her short stories and poems have appeared in Rockhurst Review, Hotwired, The Salt Hill Journal, Free Lunch, The West Wind Review, The Prairie Star, Gargoyle and many other journals and newspapers. Her short story Open Eyes was given first prize by Sandra Cisneros for El Andar magazine’s 2000 writing contest. She co-edited a women’s literature/studies textbook Diverse Voices of Women (Mayfield Publishing, 1995). Ms. Inclán has degrees in sociology and English literature from CSU Stanislaus and a Master’s degree in English literature from SFSU. Ms. Inclán lives in Oakland, California and is currently at work on a contemporary novel and a book of essays and another romance.

One Reply to “How to Bake a Man”