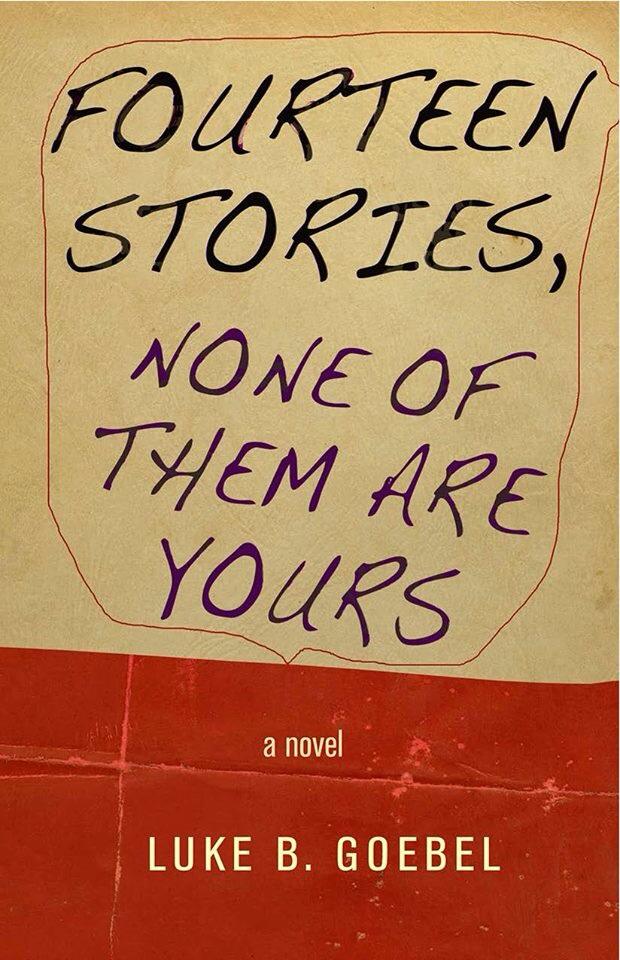 Fourteen Stories, None of Them are Yours by Luke B. Goebel

In this dazzling debut about life after loss, Luke B. Goebel’s heart-hurt, ultra-adrenalized alter ego, H. Roc, leads us on a raucous RV romp across what’s left of postmodern America and beyond. Whether it’s gobbling magic cacti at a native ceremony in Northern California, burning bad manuscripts in a backyard bonfire in East Texas, or travelling at top speed to an infamous editor’s office in Manhattan (with a burnt-out barista and an illegal bald eagle as companions), scene by scene, story by story, Goebel plunges us into a madly original fictional realm characterized by heartbroken psychedelic cowboys on the brink––lonely men who wrestle wild dogs on cheap beaches and kick horses in the face to get ahead.

“I would call this, fey as it sounds, ‘American bard yawp,’ not so much concerned with what it means as whether I have stolen it or not, and I would hazard that this Luke Goebel feller, if we may pretend for a itty bit the word is not exactly pejorative, is ‘insane.’ We have here the fine coherence of the not-deliberately incoherent, a proud-standing mess, like a Faulkner mess. It’s after the ‘the giant American heart’ that Kerouac and Kesey were wafter in their Neal Cassidys, you have Burroughs and Bukoswki rants, Ashbery misconnections, Hannah whiskey whistling, and spinning up from it once in a while the fist of the perfectly put. If this is a work of non-fiction, it is a miracle that its author is alive. If it is fiction, it is the miracle. By my eye, it is not made up. It is received, has been done to its author, like a beating, and he is not unhappy at how he’s taken the beating.”

—Padgett Powell, Whiting Writers’ Award winner and author of Edisto and You & Me

“About twenty pages into Luke B. Goebel’s Fourteen Stories: None of Them Are Yours, I realized I was reading with one hand holding my forehead and one balled at my waist, kind of clenched and gazing down into the paper, like a man soon to be converged upon. Goebel’s testimony comes on like that: engrossing, fanatical, full of private grief, and yet, at the same time, charismatic, tender, and intrepid, aglow with more spirit than most Americans have the right to wield.”

—Blake Butler, author of Nothing and Scorch Atlas

“I’m in love with language again, because Luke B. Goebel is not afraid to take us back through the gullet of loss into the chaos of words. Someone burns a manuscript in Texas; someone’s speed sets a life on fire; a heart is beaten nearly to death, the road itself is the trip, a man is decreated back to his animal past—better, beyond ego, beautiful, and look: there’s an American dreamscape left. There’s a reason to go on.”

—Lidia Yuknavitch, author of The Chronology of Water and Dora: A Headcase

“Luke may be one of the last few geniuses we have left in this life. I mean that. He’s a good boy with a lot of pain in his heart.”

“The protagonist of Fourteen Stories: None of Them Are Yours doesn’t make it easy for us, channeling as he does Barry Hannah and Denis Johnson by way of Rick Bass and Dennis Hopper, and self-presenting as yet another damaged romantic who thinks it’s always time to play the cowboy, skating in and out of sense. He can’t see right, and he’s haunted by nearly everything. He’s trying to open up or shut himself down or at least get a hold of himself. He’s trying to make do with what he’s done, while he reminds us that we’re all, one way or another, in that position.”

1) Fourteen Stories, None of Them Are Yours has an experimental form and structure. The narrator constantly invades the narratives and stories. Our narrator interrupts, adjusts, and reframes and interacts directly with the stories and the reader.  Does this formal experimentation challenge you in a productive way? Does this formal play bring you more alertly into the experience of the novel, making the reading experience more interactive, personal, intense, and immediate? Are there other fictions which you have read, that work in any sort of a similar form?

2) Why is there so much wildness and provocation in this book, incorrectness, and tension in the prose? Does the wildness in the book bring any realizations to you as a reader? What are the relationships between vulnerability and mad abandon in the work?

3) Some early praise of Fourteen Stories, None of Them Are Yours hinted at this novel being in the traditions of large swaths of American literature—from Whitman to Kerouac, from John Ashberry to Dennis Johnson, from Bukowski to Burroughs, etc. How does the story (and spirit) of the novel, as well as the writing style, take part in the construction of the mythology of America and engage with past American Literary movements? Does the book make you feel differently about life in America now than when you began reading?

5) How do you think, say, a vagabond youth would like Fourteen Stories, None of Them Are Yours? What might a young vagabond think of the novel?

6) What might a conservatively minded venture capitalist (redundant?) think of the book? Is this book for everyone/anyone?

7) Do you see a reason for the narrator’s defiance of socially acceptable terminologies? Do you think the narrator wants a better world for all people? Why is he talking the way he is talking, especially given the current movements in upper class sections of urban America to be much more sensitive and politically correct with language?

8) What does this book leave you with? What does it make you want to do after you have read it? How did it change you, or did it?

Barry Hannah, Airships: Now a contemporary classic short-story collection, this Southern Gothic breakaway collection gave Hannah his reputation for high-flying heart-broken Southern blotto stories of the greatest heart and form. Positioning himself and his personality into fictions both masterful and propulsive in narrative, working astounding voice into his sentences, our great Southern hero Barry Hannah gave the world a new allegiance to swear to, especially for young disenchanted readers looking for a new call to honesty and ranginess. This collection was the winner of Esquire Magazine’s Arnold Gingrich Short Fiction Award and the Pen/Malmoud Award. In these stories, Hannah takes on post-Vietnam America, the South, romance and its constant pricks and savaging, and the wild heart of America. His collection is one that keeps the reader going and going, as so few collections can—moving the reader from story to story in absolute astonishment and wonder and heart-swelling desire for more. Lidia Yuknavitch, The Chronology of Water: In this masterful memoir that was the Oregon Reader’s Award Winner for 2012, Lidia Yuknavitch unflinchingly creates a nontraditional story of loss, lostness, and redemption—on the way she takes apart and tears down the patriarchal, the late-capitalist, the misogynic and the taboo. Placing her life in the contexts of patterns, roles, history, society, defiant art, theory, and her unique place in a legacy of literary traditions, Lidia Yuknavitch executes such a powerfully raw and simultaneously polished and perfectly-wrought prose, that one cannot help but to read on hungrily, enviously, and amazedly at the courage, heart, and honor of a fully-rendered and actualized self so rare to encounter. Even more rare to encounter than a fully actualized self, is this person in the written form. Here is a hero and a fully-formed person who has rescued and formed herself from the person we all begin as, a person made by and for others, shaped by the violence and pressure of our origins and the events we survive. Lidia Yuknavitch’s story is so raw, powerful, and heartbreaking and healing that it seems almost impossible that this memoir is real, and yet it certainly is true and realer than most things we are lucky enough to encounter in life.

Atticus Lish, Preparation for the Next Life: This is easy, as I already blurbed this book. Preparation for the Next Life is a masterwork. This book comes to terrify writers of the sort of Don Delillo, Eugene Marten (if one can remember their names after reading Atticus), and the multitudinous folderol of realism. Lish is a new master of heart and compassion and pure power. Here, now, is Atticus Lish: working such shock and awe, mixed with poetic holy grace, going from the lyric Chinese interiority of the heroine (Zou Lei), to the pure shell-shocked bodily muscle of an American sublime madman soldier (Skinner). Here’s a love story for the lovers—but also our first-great-American masterpiece of the new world qua terror, living in terror, the might of the glorious city of New York. I’m terrorized standing in the heroic shadow of our protagonist fellow, in the crazed-yet-controlled free-moving vastness of the styles of Atticus’s prose, of the magnificence, good God, what else can be said, sheer magnificence! This is the first book that terrorized me and flagellated me to standing, roaming about my house, not sleeping, declaring “My God, My God, he has done it!” Crafted with such power and grace, one can remember one’s first moments, gripped by the first book (for me it was Cuckoo’s Nest), which turned a person onto the possibilities of literature. Atticus Lish is head and neck and muscle and grace above the others–he’s written the first post-national American novel.

Ryan Ridge, Hunters and Gamblers and American Homes: Everything by Ridge is a wild combing mix of humor and heartache, in the style and spirit of Brautigan and Hannah and Vonnegut. Get yourself some Ridge, like a can of beer and a hot tray of T.V. dinners and settle in for a night spent with the almost unbearable humor and tragic madness of our alien mothercountry. Luke B. Goebel is the recipient of the Ronald Sukenick Prize for Innovative Fiction and the Joan Scott Memorial Fiction Award. He earned a BA from the University of San Francisco and an MFA in English from the University of Massachusetts, Amherst. He worked as an editor with a NYC-based literary journal and independent publishing house. He is an assistant professor of creative writing at the University of Texas at Tyler. He was born in Ohio and grew up in Portland, Oregon.

One Reply to “Fourteen Stories, None of Them are Yours by Luke B Goebel”