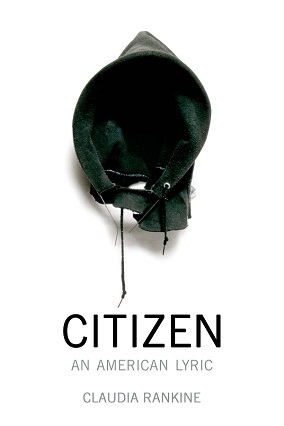 Claudia Rankine’s bold new book recounts mounting racial aggressions in ongoing encounters in twenty-first-century daily life and in the media. Some of these encounters are slights, seemingly slips of the tongue, and some are intentional offensives in the classroom, at the supermarket, at home, on the tennis court with Serena Williams and the soccer field with Zinedine Zidane, online, on TV—everywhere, all the time. The accumulative stresses come to bear on a person’s ability to speak, perform, and stay alive. Our addressability is tied to the state of our belonging, Rankine argues, as are our assumptions and expectations of citizenship. In essay, image, and poetry, Citizen is a powerful testament to the individual and collective effects of racism in our contemporary, often named “post-race” society.

“[Citizen] is an especially vital book for this moment in time. . . . The book explores the kinds of injustice that thrive when the illusion of justice is perfected, and the emotional costs for the artist who cries foul. . . . The realization at the end of this book sits heavily upon the heart: ‘This is how you are a citizen,’ Rankine writes. ‘Come on. Let it go. Move on.’ As Rankine’s brilliant, disabusing work, always aware of its ironies, reminds us, ‘moving on’ is not synonymous with ‘leaving behind.'”—The New Yorker
“So groundbreaking is Rankine’s work that it’s almost impossible to describe; suffice it to say that this is a poem that reads like an essay (or the other way around) — a piece of writing that invents a new form for itself, incorporating pictures, slogans, social commentary and the most piercing and affecting revelations to evoke the intersection of inner and outer life.”—Los Angeles Times
“Citizen: An American Lyric presents a radical portrait of our ‘post-racial’ society.”—Vanity Fair Claudia Rankine was born in Jamaica in 1963. She earned her B.A. in English from Williams College and her M.F.A. in poetry from Columbia University.She is the author of four collections of poetry, including Don’t Let Me Be Lonely (Graywolf, 2004); PLOT (2001); The End of the Alphabet (1998); and Nothing in Nature is Private (1995), which received the Cleveland State Poetry Prize.Rankine has edited numerous anthologies including American Women Poets in the Twenty-First Century: Where Lyric Meets Language (Wesleyan, 2002) and American Poets in the Twenty-First Century: The New Poetics (2007). Her plays include “Provenance of Beauty: A South Bronx Travelogue”, commissioned by the Foundry Theatre and Existing Conditions, co-authored with Casey Llewellyn. She has also produced a number of videos in collaboration with John Lucas, including “Situation One.”

A recipient of fellowships from the Academy of American Poetry, the National Endowments for the Arts, and the Lannan Foundation, she is currently the Henry G. Lee Professor of English at Pomona College.