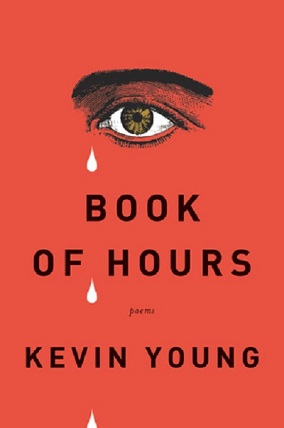 Book of Hours by KevinYoung

A decade after the sudden and tragic loss of his father, we witness the unfolding of grief. “In the night I brush / my teeth with a razor,” he tells us, in one of the collection’s piercing two-line poems. Capturing the strange silence of bereavement (“Not the storm / but the calm / that slays me”), Kevin Young acknowledges, even celebrates, life’s passages, his loss transformed and tempered in a sequence about the birth of his son: in “Crowning,” he delivers what is surely one of the most powerful birth poems written by a man, describing “her face / full of fire, then groaning your face / out like a flower, blood-bloom,/ crocused into air.” Ending this book of both birth and grief, the gorgeous title sequence brings acceptance, asking “What good/are wishes if they aren’t / used up?” while understanding “How to listen / to what’s gone.” Young’s frank music speaks directly to the reader in these elemental poems, reminding us that the right words can both comfort us and enlarge our understanding of life’s mysteries.

“An impressively musical exploration of grief and endurance. . .Young wrestles with loss and joy with enviable beauty and subtlety.”
— Publishers Weekly

“If you read no other book of poetry this year, this should be the one.”
— Atlanta Journal-Constitution

“What could be better, or harder, than death and birth in one book? Young is our prolific chronicler of the state of the African-American union, but also of fatherhood, of son-hood. These poems counter the grief of the father’s death with the bewildering joy of a child’s birth. This is mourning with its feet on the ground—of the dead father’s dogs, Young writes, “Their grief is colossal// & forgetful./ Each day they wake/ seeking his voice,//their names.” He also evokes new fatherhood with all the grit: “Like the rest of us,” he says to his newborn son, “You swim// In your own piss.” Young has captured true adulthood between the covers of a book.”
— Craig Morgan Teicher for National Public Radio Kevin Young is the author of six previous collections of poetry and editor of five others. Jelly Roll was a finalist for the National Book Award and the Los Angeles Times Book Prize, and won the Paterson Poetry Prize; For the Confederate Dead won the 2007 Quill Award for poetry. The recipient of a Guggenheim Fellowship and a United States Artists James Baldwin Fellowship, Young is currently the Atticus Haygood Professor of Creative Writing and English and curator of Literary Collections and the Raymond Danowski Poetry Library at Emory University in Atlanta.