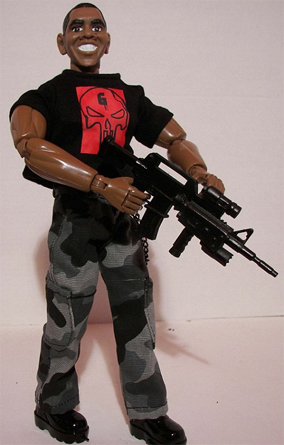 I’ve recently come across a thesis on how President Obama’s comments to the Jonas Brothers and their imagined intentions toward the First Daughters could result in a drone attack or that readers should assume that the President is drone happy because he is an overprotective father type.

[quote]”Two years ago, at the White House Correspondents’ Dinner, he told the Jonas Brothers that his daughters were ‘huge fans.’ He then warned the singing group not to ‘get any ideas’ because he controls an arsenal of predator drones.”[/quote]

The thesis set up with all the technical proficiency one would expect of a blogging Phd, but it fell down for me when the direct link between Obama’s arsenal of drones and his parental conflict strategies became an axiom. It might have made a good humor piece if that were the intention. Originally, I thought satire was the intention but the voice continued on in genuine concern and attempt to prove the thesis.

I’m not sure an off-handed drone comment should be attributed to a man’s homicidal drone tendencies regarding would be suitors of his daughters. Sure, it’s a media sexy concept, one that could potentially be worthy of critique but it smacks of conspiracy unless directly evidenced in specific context and venue. Warfare, a nasty task of the commander in chief, does not set an axiom for domestic, and certainly not familial, conflict strategies. It sets a possibility, sure, but does Obama evidence domestic bullying? Has he shown violent outbreaks against his family or friends? The axiom setting takes it too far. It becomes a discourse based on fallacy.

I would offer a commonality as another potential way to look at all of this. In many female and/or child “courting” and exploitation predation behaviors, perpetrators begin with an investigation of male roles in the female/child’s life. As right or wrong as this is, sexual predators, pimps, sex traffickers, etc. will often target girls and women and “weaker” males without what they perceive to be strong male “protection.” They will ask these questions up front, dig into the female’s or what they perceive to be the “weak” male’s family history and glean whether or not there is this father or older brother protective threat. It is an effort to understand whether or not the target will be an easy mark or more complicated mark. More complicated marks often have stronger family with a strong male presence. There are certainly outliers, sure. Serial killers, etc. but the more common perpetrator will back off if he or she knows another strong male or female will kick his ass. This unfortunately coincides with a lack of strong female or “weak” male training, too, so I completely agree with the thesis that Obama’s language should be more “I have taught my daughters how to identify predators and they will kick you in the balls then I will kick you in the balls and then Michelle will find you and you don’t even want to imagine what she’ll do to your balls,” (of course, balls would not likely be a term in the president’s vernacular, though, he may or may not be thinking it). Regardless this preceding example would be better than “I, myself, man with drone power will drone you in the balls because I am the He-Man and protector of everything.” The preceding is obviously a far better identifier of strong female individuality as well as familial structure.

As a woman who grew up in a family with very little equality and gender awareness, a boatload of fatherly control, I empathize with the over-protective father and under-trained daughter voice, but I think we can sometimes go too far in our assessment of comments out of context and applying intentions and motivations. I find it a little offensive, as if the female position and familial training is a prop for drone discourse, a lead in. I’m sure this offense was not intended but it is a risk this thesis runs, I believe, without further research. Just one view.

Rae Bryant’s short story collection, The Indefinite State of Imaginary Morals, released from Patasola Press, NY, in June 2011. Her stories and essays have appeared in The Paris Review, StoryQuarterly, McSweeney’s, Huffington Post, Gargoyle Magazine, and Redivider, among other publications and have been nominated for the Pen/Hemingway, Pen Emerging Writers, and Pushcart awards.