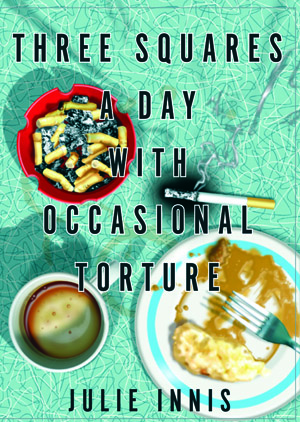 From Three Squares a Day with Occasional Torture
Foxhead Books, 2012 Sensei Vinnie says, for fifty bucks, he’ll teach us the Way of Action, the way of kicking some ass. Ten weeks of training and a free gi.

The gi he gives us are frayed, yellowed in the pits.

For that, Sensei Vinnie makes us drop and give him twenty.

Gilbert drops after five. I barely make it to nine.

Christ, Sensei Vinnie says. What a couple of pussies.

The dojo’s in the back of Sensei Vinnie’s Exotic Fish and Lizard Store. I stopped in one day on my way home from school. My Myers-Briggs suggested I’d be good at Marine Biology, but I didn’t give a shit about fish. What I really wanted was a lizard. I’d seen a guy once walking an iguana on a leash in Central Park. He looked like a total bad-ass and I was at my breaking point. If an iguana was what it took, I was ready to spend all my birthday money on a lizard. Besides, my mom had already said there was no way in hell she was going to buy me a Rottweiler or a pit.

Tank after tank of fish and not a lizard in sight.

Sunning themselves on the roof, Sensei Vinnie said.

Repo’d, more likely, Gilbert’s father said when he forked over the hundred we needed for the course. Gilbert had lied, doubled the price. He hated his father, what did he care. Me, I had a mother and a baby sister and a hamster I didn’t hate, per se, but that I really wanted to feed to a gila monster.

Gila monster? What are you some kind of Crocodile Dundee? Things did not end well for that guy, Sensei says.

For that, Sensei Vinnie makes him drop and give him twenty.

We push up, we sit up, we run around in circles.

Pansies on parade, Sensei calls us.

He tells us we need to take it up a notch, take it to another level.

The Way of Do. For another fifty, he says he’ll teach us.

The Way of what? Gilbert says.

Too many kicks to the head, Gilbert’s father says.

Do can’t be explained, Sensei says, it can only be experienced.

Ancient Chinese Secret, Gilbert says, using one of his accents as he slits his eyes.

Adjust that attitude, I’ll throw in Do for free, Sensei says.

Not bloody likely, Gilbert says in that other accent, the one that’s gotten us into all this trouble in the first place.

Pathetic, he calls him.

Talented, Gilbert’s other father calls him.

The mother? I say.

Gilbert shakes his head. The receiver, he calls him.

Sensei Vinnie promised that in ten weeks he’d turn us into lean mean fighting machines. But we’re already five weeks into it and I have yet to shatter a pair of nuts or lay the beat-down.

It’s all in the Do, Sensei says. You can’t be a badass without it.

Can’t you just tell us what it is, Gilbert complains, his voice pitched too high.

What it is is not that, Sensei says, mimicking. Should’ve paid the extra fifty.

Through trial and error we define our Do.

Action is the Way of Do.

Push-ups are the Way of Do.

Doing what Sensei says is the Way of Do.

Acting like pussies is not the Way of Do.

Backtalk is not the Way of Do.

Where the fuck is that bastard, Gilbert says. He points at the clock, the second-hand fish already at half-past.

Lateness is not the Way of Do, he says in Sensei’s Brooklyn accent.

Lateness is the Way of Sensei Vinnie, I say, agreeing.

We kill time, we drag our fingers through the tanks, trying to coax fish to attack us.

These fucking fish don’t even have teeth, Gilbert says, rapping the tank with his knuckles.

He doesn’t wait for my answer. He goes.

Patience is the Way of Do.

I’d like to shatter the nuts of the 4 train driver, he says.

Sensei Vinnie wants to shatter the nuts of lots of people.

Preparation plus Opportunity, he tells me. That’s the secret.

Is that the Do? The ancient Chinese Secret? I say, serious, no accent, no slitted eyes.

What? No. Jesus, kid, why you got to be such a geek, Sensei Vinnie says, disgusted.

Ashamed, I vow to redouble my efforts.

Seven weeks in and I finally land a kill shot.

You hear that, Sensei Vinnie whoops, hand cupped to his ear. That was the sound of two nuts shattering.

Gilbert rolls on the floor, two hands cupped to his crotch, eyes screwed shut and mouth yawling. The noise he makes fills me with a regret I quickly push aside.

Pity is not the Way of Do.

And that, my friend, is the sweet sound of success, Sensei says, pointing. Shake it off kid. A warrior fights through pain.

To me, he says, Congratulations. You’ve just graduated out of pussy school.

Gilbert ignores the hand Sensei offers. Rolls to his side, works his way up, one knee at a time, winching.

What the fuck asshole, he says to me. To Sensei, he says nothing.

I’m left to sweep and mop the dojo by myself, tip flakes into the tanks, skim the shit while Sensei makes phone calls. Angelique, Monica, Sugar Tits, Sweet Lips.

Now that I’m no longer a pussy, Sensei says it’s time I start bagging some babes.

The more babes the better, he says, phone at his ear, eye winking.

Gilbert gets handjobbed by Jessica Steinmann at her bat mitzvah.

Me, all I get is a goodie bag.

Way to go. You bagged a bag, Gilbert says, punching my arm.

I guess your nuts are better now, I say.

Better than ever, Gilbert says, cupping.

For this, Gilbert earns his black belt.

The belt Sensei Vinnie gives him is brown in spots from bleach.

Takes one to know one, Gilbert says, cupping.

He doesn’t even bother using one of his accents.

Keeping score is not the Way of Do, Sensei says, shrugging.

Sensei Vinnie says he gets so much, he can’t put a number on it.

When he isn’t calling it pussy, he calls it poontang.

Asian, italian, black, hispanic, all the colors of the poontang rainbow, he says.

Got the taste for tang when he was in Nam.

Gilbert suggests that Sensei meet my mother’s poontang. He can say this because he has two fathers and no mother.

Never dip your wick where you do business, he says.

I say nothing. All I know is that at this rate, I’ll never dip my wick, I’ll never know the joys of poontang.

I bet your mother’s one sweet piece of poon, Gilbert says, taunting.

You going to just stand there, take that? Sensei says.

The Way of Do is honor. I vow to vindicate my tarnished mother.

I try for a killshot. I miss. I try again. I miss again.

When I look to Sensei, he looks away.

Where are you getting all of this, who are you becoming? my mother says. She grounds me for a week, but lets me off for good behavior after two hours.

Women: no Do, no discipline, Gilbert says, disgusted.

Gilbert’s different now too, ever since I shattered his nuts, ever since he started getting handjobbed. He’s shaved his hair off and breaks boards with his head, ball-point swastikas on his forearms.

But you’re Jewish, I say.

His fathers call it acting out.

Sensei Vinnie calls it unacceptable, makes him scrub his arms with the brushes we use to clean algae from the tanks then makes him drop and give him twenty.

Gilbert drops and gives him twenty then twenty more, Sensei’s mouth popping open and shut like a stupid fucking fish.

No poker face at all on Sensei.

I am disgusted. What about me? I signed up for Action also. Where are my broken boards? Where are my handjobs? I want to argue, but the most I can manage is fifteen and even at that, I don’t finish strong.

For every ass-kicker, there’s an ass. Yin and yang, Sensei Vinnie says.

Buddhist, Gilbert says and aims a killshot right at my nuts.

Bullshit, I yell from my crouch on the floor. I am not the ass, I yell, trying not to cry, the pain radiating out like earthquake waves, my nuts the epicenter.

After ten weeks, Sensei Vinnie says it’s time to re-up for another tour of duty.

Gilbert graduates from boards to guts, mugs, and more nuts.

He redefines the beat-down. He keeps his head shaved.

That’s right, motherfuckers, Gilbert threatens us in the halls, his voice flat.

He doesn’t even bother with accents anymore.

Me, I scrub the tanks, I skim the shit, I listen in, memorizing what Vinnie says to his ladies to repeat to myself later.

It may not be Do, but at least it’s something.

The Receiver, Gilbert calls me.

He gives me his black belt when no one’s watching.

A souvenir, he says.

Julie Innis is originally from Cincinnati and now lives in New York. Her stories and essays have appeared in Post Road, Pindeldyboz, Gargoyle, and The Long Story, among others. She holds a Master’s in English Literature from Ohio University and is currently on staff at One Story as a reader. Her story collection, Three Squares a Day with Occasional Torture, released from Foxhead Books in 2012.

One Reply to “Do”