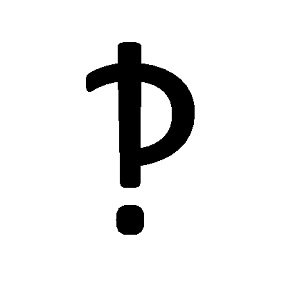 Isn’t it just so annoying when a stranger bursts your personal space bubble and decides to tell you the winding tale of his life story that you are most certain will never have an end?!?

I mean, really, aren’t there just times when someone has been speaking for, like, ever, and you’re like WTF?!? because how the hell can someone talk for that long?!?

And furthermore isn’t it irritating when people use four sentences to get across a point they could have made in one?!?

That last example annoys the hell out of me. A lot. I like short. Succinct. A get-to-the-point-ness type of writing. Why waste space? Tighten up, people, tighten up those sentences.

Due to this word nerd/picky editor/grammar snob characteristic trait of mine, I have recently fallen in love with the interrobang.

Well lookey there! She’s right there! She’s that bit of punctuation that looks like a question mark with an absurdly large erection. (Yes, people. Open up your little false gender dichotomy minds. It is absolutely plausible and badass to refer to the question mark as “she”and then further comment that she has an erection. Just accept it). So, I implore you to take another look above and notice the symbol positioned post- “interrobang” in the sentence that is one parenthetical and three sentences prior to this sentence. If you’re still stuck on thinking about how gender exists on a spectrum and is not a dichotomy, then try this one: you see that capital P with a hat on and a foot severed from its body? That, my dear, is the interrobang.

Think something is fantastic and confounding? (Re: female subject with an erection). Then don’t waste space with question mark exclamation point question mark, interrobang it!

Two gold stars for you today, one for each new thing you learned:

Chelsey Clammer received her MA in Women’s Studies from Loyola University Chicago, and is currently enrolled in the Rainier Writing Workshop MFA program. She has been published in The Rumpus, Atticus Review, and The Nervous Breakdown among many others, and has an essay forthcoming in the South Loop Review. She is an award-winning and Pushcart Prize nominee essayist. Clammer is the Managing Editor and Nonfiction Editor for The Doctor T.J. Eckleburg Review, as well as a columnist and workshop instructor for the journal. She is also the Nonfiction Editor for The Dying Goose. Her first collection of essays, There is Nothing Else to See Here, is forthcoming from The Lit Pub, Fall 2014. You can read more of her writing at: www.chelseyclammer.com.