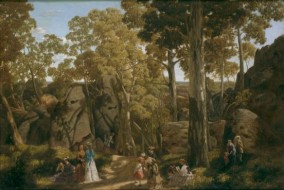 I seek out in stories what might repel me in real life: the erratic, irrational, even grotesque — sometimes filtered through the prism of the absurd. For the past year, I’ve been on a wandering sabbatical to complete my story collection, Forgive This Intrusion, which addresses themes of identity, compulsion, power dynamics, and social constructs. I’ve lived mostly in larger cities, so many of my stories took place in urban settings. But something happened as I began to write full-time and move from artist residency to guest housing and other nomadic pursuits: the stories changed and reflected my experiences in each new location. My stories often have an element of disquiet, and I’ve discovered that the act of exploration enhances this state. There is constant tension between fear of the unknown and the desire for adventure; prudence and risk-taking; isolation and assimilation.

I started writing The Ravine in late February 2014, during a residency at Playa in Summer Lake, Oregon. Coming from the grid of NYC, the varied, raw landscapes and climates I experienced in Oregon had a huge impact on me. Initially I was too enthralled by the sheer beauty of the place, and frankly, just too happy — and while I wanted to utilize my surroundings I could not see myself writing a pretty nature story. Then, as I went on long hikes by myself, I started to see how nature and all its creatures, while magnificent, could also be formidable and terrifying. Certain images and references came to me as I walked in those still, quiet mountains. During one memorable hike, I heard a strange atmospheric roar coming from the hills nearby. It reminded me of the movie Picnic At Hanging Rock (which by the way is just gorgeous and brilliant), with its obsessive, dreamy aura of Victorian repression. This led to associations of Alfred Hitchcock, whose movies I love, especially Vertigo, Marnie, and The Birds. His movies made me think of a certain era, before the second-wave feminist movement, and also of the suffocating, almost incestuous mother and son dynamic so prevalent in them. Repression, feminism, and psychological horror as themes began to percolate, and I started to feel very strongly that I wanted to write a period piece set in the 1950s, something I’d never done before.

The process I’ve described pretty much reflects the way I approach my stories — in an associative, almost collagist manner. Oftentimes I’ll latch onto movies, not consciously, but they’ll just pop into my head, and when they do it really helps to establish the right tone. For me that is critical, as it sets the foundation for whatever is to come: conflicts, plot, story arc, and so forth. Endings are also important, and for that reason, I usually find them quite difficult. Last impressions, more than firsts, have a lingering impact. For me, a good ending is one that avoids any neat resolution — and god forbid, redemption — and yet still feels utterly satisfying. The Ravine is one of the few stories I’ve written where the ending actually came together easily. When I first wrote about Robert’s likeness to a bear, I knew I wanted that image to come back in some way, but I had no idea how it would. And then as I was writing toward the last scene I just saw it — it really was like the clouds parted and gave it to me — and the rest fell into place. That almost never happens; most of the time I find writing to be such a painful slog. But those rare instances, when you feel like you’re channeling something versus working at it, are pretty exhilarating.

Chin-Sun Lee’s stories and essays have appeared in The Believer Logger, SLICE, and Shadowbox Magazine, among other publications. She is a contributor to the anthology Women In Clothes (Blue Rider Press/Penguin 2014), edited by Sheila Heti, Heidi Julavits, and Leanne Shapton. She also collaborated and performed in the video “Spinning World” by the art/literary/rock band The Size Queens (also featured in Medium Cool at The Doctor T. J. Eckleburg Review), which premiered on PANK‘s blog website.

Chin-Sun Lee’s stories and essays have appeared in Your Impossible Voice, The Believer Logger, SLICE, and Shadowbox Magazine, among other publications. She is a contributor to the anthology Women In Clothes (Blue Rider Press/Penguin 2014), edited by Sheila Heti, Heidi Julavits, and Leanne Shapton. She also collaborated and performed in the video “Spinning World” by the art/literary/rock band The Size Queens (also featured in Medium Cool at The Doctor T. J. Eckleburg Review in November 2012), which premiered on PANK’s blog website on October 3, 2014 http://pankmagazine.com/tag/the-size-queens/.