I’m sure I saw the light dimming and the trees outside swooning, swimming. I could, perhaps, blame it on the jungle. On the disorientations of being so close to the equator, on the suffocation of being wrapped in strangler figs, on the isolation of being in a land where my words didn’t land. But there was something wrong in the glow of that jungle light.

The River Kwai rose over the Death Railway, up to the cemetery filled with European prisoners, and into my nostrils. I was the only Western woman in a town built on the sorrow and pleasure of Western men, where the world’s travellers came to see the spectacle of horror and ease that discomfort with bar girls. I could not forget that I was a woman and I was white. It kept walls around me. The blue of my eyes was icy, terrifying, and my breasts spilled into horrified lines of sight. Yisok fish jumped out of streetlights and the land got distorted, rising in karsts and those protrusions became temples, caves, and dragons all at once. From my balcony across the river, I watched the temple-dragon-cave. Mouth of the dragon at the base of the karst, body of stairs like a backbone snaking up the rise, belly holding a cave of secrets.

My teeth turned to crocodile eggs, cracking and spilling baby predators into my mouth and onto the floor. I kept my jaw tight to keep them inside. I only left the house to go to the dragon temple. Otherwise, I stayed inside, played unmarried housewife, hoarded cheese like gold, and laid my face on the white tile floor for hours so that I could remember cold. At the temple, the story is painted on the walls, all up the stairs I climb. Lovers with shy Thai eyes in the forest, a wedding for a hero and his bandit princess, glimmering, glittering. Even after years the paint is bright and the closer I rise toward the sun, the more garish it gets, as if the colors can make the story right. Up and up into the cave and into the shrine where the rock is painted and wears dresses. The rock is Nang Buakhli, the first wife of the hero Khun Paen. The rock is adorned in golden silks, and without the dresses and paint, I am not sure it looks like a woman. When I leave the cave, I am even more confused. The light at that latitude is so, so bright.

I’m not sure how the story was told in pictures, captioned in a language I could not read and held in memories shrouded in haze. Looking back, the mural takes shape as I learn the story and the traditional paintings turn grotesque, gory. Nang Buakhli’s father whispers plots into her ear at night. Poison, poison, he doesn’t love you right. Khun Paen hears the whispers as he sleeps beside his wife and her belly swells with his child. How can such a full body have no heart? Paen blows a powder over the town, so they sleep all night.

But really, the poison is an afterthought in the telling. It is not the motivation. It is the justification. The excuse, the reason why the murder is her own fault. Not the fault of the hero. Never his fault. His skystorm sword is right and true, even as he plots his next marriage. But it’s Nang Buakhli who is heartless, who has the belly holding the cave of secrets.

And so Khun Paen cuts her open, guts her like a yisok, mouth to tail, so that she writhes like a fish in their bed. What luck! A boy! How was this part shown in the temple paintings? He wants the child for himself, to create the first Guman Thong, an amulet to take into battle, to win the hand of his true love. Come, my Golden Boy. Come with your father. And let’s leave your mother there. There’s something wrong in the glow of that moonlight.

I’m sure I’ve created a disease. Heart of Darkness Syndrome. And I’ve given it to the neighbor. His pasty Australian skin was so translucent that the sickness went right through it and straight to his brain, until he was sending his boss letters with “cock” and “pussy” smeared all over them. The horror of what a mind will do without connection, in isolation from one’s family, one’s friends, one’s own society. It wasn’t long before he was suspected (found out by my boyfriend – the hero!) and his apartment was raided in the middle of the night. And just like that, he disappeared. The horror, the horror, of what a mind can right.

And when I tried to go to work, the other teachers caught it too. Middle-aged men, so white, so pale. Maybe they were sick before they got here. Their Thai birds interchangeable. Who’s on your branch tonight? Does it matter? They’re so much more obedient, so much lovelier than those white hags. Even Mostyn, dear sweet young Mostyn fell victim. And so I stayed inside, trapped by the heat, the isolation, and the humidity. Curtains closed to make the too-bright dark, my body pressed against cool concrete, my belly holding a cave of secrets.

Cobalt lizards beat out the rhythm of my heart. And the strangler figs were trying to strangle me. And then my partner started showing the signs too. No one’s going to search a white man’s underwear, he reasoned and just like that he smuggled, underpants full of drugs, because he loved me so much. The light at that latitude is so, so bright.

I’m not sure how much of the story the temple paintings told. Do they show Nang Buakhli flowing blood like a water buffalo? Khun Paen putting a too-young-to-breathe son in his bag? Is there a scene of him riding off into the dawn, Golden Boy at his side as the town continues to sleep?  How can we portray this hero in a positive light?

What does Khun Paen do with the Golden Boy? He roasts him, of course. He makes a hammock of sacred cloths to rest the child in, lights a fire under the body and lets it sizzle. The fat drips and fizzles. He meditates and turns his boy over the fire until he is dry. Better than a son, the Golden Boy roasts until all the potential of the lives now gone rest condensed in the unborn gristle, belly holding a cave of secrets.

And I wonder about the painting of this scene. Does it show that there’s something wrong in the glow of that firelight?

I’m sure that I’ve caught the tamarind trees sneaking into my balcony, through the windows, into the bedroom, and inside my head. Those things in your head don’t belong, my partner tells me as I question the hours spent on nighttime walks, the showers taken with the phone. And then the calls and texts from his high school students started. Sweet dreams, kiss, kiss. Is there a way to respond that isn’t insane? It came to a head in a pillow fight.

I will admit that I threw the first pillow, with accusations and with spite. God-like delusions, sleeping with children. He took the pillow and smothered me. Crazy. Crazy. Crazy. Until I conceded that I was to blame. Suffocated by doubts. As if everyone had a belly holding a cave of secrets.

Even now, years later, they are not fully formed sentences, but slanted ghosts of thoughts. I cannot say them straight on. You’re imagining, he told me. Imagining looks, imagining phone calls, receipts for dates, dating profiles aimed at too-young girls, conversations between us two. Until it was all imagined: the empty apartment with the too-white walls, the tamarind trees, the River Kwai, the dragon-temple-caves. As if even the tangible dissipates in this humidity and heat. The light at this latitude is so, so bright.

I’m not sure how to understand the narrative so that someone comes out right.

The horror, the horror, of a belly holding a cave of secrets,

There’s something wrong in the glow of that gaslight.

The light at that latitude is so, so bright.

Growing up in the sultry swamps of Florida, Jaclyn Bergamino developed an appreciation for the environment and how it shapes her experiences. Since then, she has taught English and art in Thailand, New Zealand, the Czech Republic, and the Bahamas. She has been published in Writing Tomorrow Magazine, Yemassee, Saw Palm, and Exegesis. Jaclyn is currently working toward my M.F.A. in Writing at the University of Alaska Fairbanks, where she is a managing editor of Permafrost Magazine. 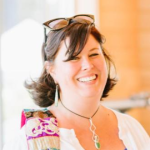