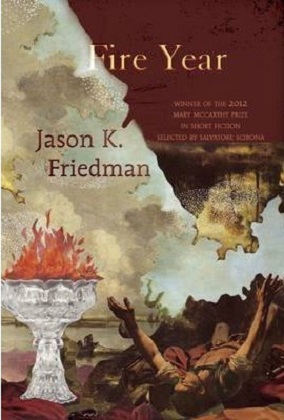 In his humorous and tender debut collection, Jason K. Friedman investigates art, sexuality, love, and religion in seven unconventional and engrossing short stories. A gay man attends his high school reunion in Savannah, where he’s pursued by the now-married former football star. An awkward teenager grapples with notions of God and girls at his bar mitzvah. A curator’s assistant struggles to understand a 500-year-old Italian painter’s body of work, until his boyfriend (whom he’s previously written off as frivolous), makes an accidental discovery that challenges decades of art criticism. Friedman’s characters stumble through communities to which they belong–a synagogue, a hometown, a family–yet somehow remain outsiders. The author’s intimate, sinuous prose creates a vivid and moving picture of the trials religious, cultural, and sexual minorities experience in Georgia and the Deep South.

“Candid, cunning, brave, and wickedly funny—Jason K. Friedman’s Fire Year will make you remember the first time you read Philip Roth. Love, lust, religious tradition, the new South, the transcendent promise of faith, the liberating hope of sexual awakening—he twists all of them together here in stories as true to our goofy joys as to our deepest intuitions.” —Salvatore Scibona

Jason K. Friedman’s Fire Year won Sarabande Books’ 2012 Mary McCarthy Prize in Short Fiction. Here, he describes the multiple darlings of his book, as well as where his writing is taking him now:

Question: In your own words, describe what Fire Year is about

Jason Friedman: I always find it illuminating to hear what other people think the book is about.  But to me it’s a collection of tales tied to specific but imagined small towns.  Characters struggle with religion and, more generally, the problem of how to be themselves in the places they live.

Q: What is your favorite story in the book?

JF: I don’t have one but I find it interesting how many people respond to the book by choosing a favorite.  So far five of the seven have been someone’s favorite, so I guess my darlings at this point are the other two.

Q: What writing projects are you working on now?

JF: A novel, stories, essays.  When I was editing the book I didn’t really focus on any other writing projects, so now that it’s out in the world, I’m trying to organize the other pieces of myself in whatever formats they want to go in.

Q: Who are some of the authors you admire?

Friedman is currently working on a trailer for Fire Year.

Jason K. Friedman was born and raised in Savannah, Georgia, and earned a B.A. from Yale and an M.A. from the Johns Hopkins Writing Seminars. His work has appeared in Moment magazine, The South Carolina Review, and other literary journals, and anthologized in Best American Gay Fiction and the cultural-studies reader Goth.  He is the author of the children’s books Phantom Trucker and Haunted Houses and the short-story collection Fire Year. He lives in San Francisco with his husband, filmmaker Jeffrey Friedman, and their strangely tall chihuahua, Lefty.